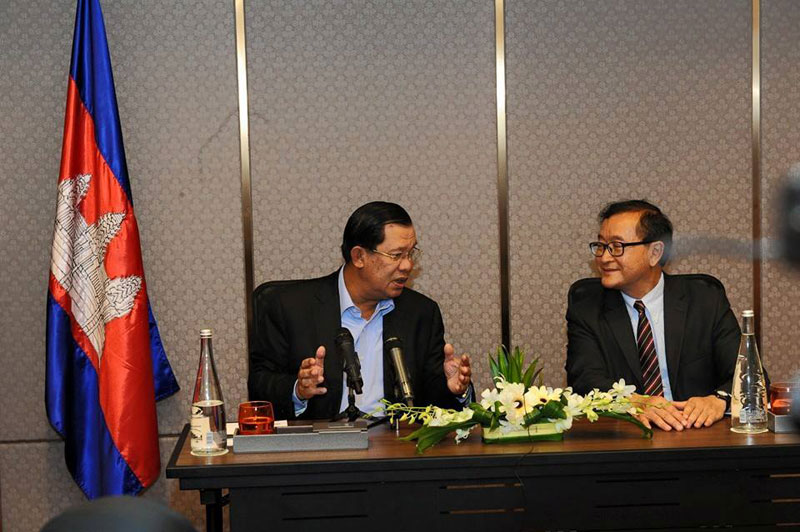 At a special public meeting with opposition leader Sam Rainsy in Kuala Lumpur on Saturday, Prime Minister Hun Sen acknowledged that Mr. Rainsy could replace him in 2018, but warned that CPP-loyal “forces” would prevent any acts of revenge Mr. Rainsy planned in such a case.

Mr. Hun Sen, speaking at a function hosted by the two leaders at the Hilton DoubleTree Hotel in Malaysia’s capital, said Mr. Rainsy would inevitably be harmed if he took power and then began mistreating his predecessor.

“Now I am prime minister, and everyone can live together,” Mr. Hun Sen said, sitting next to Mr. Rainsy in front of about 200 Cambodian expatriates in Malaysia.

“But if it comes to a time that Sam Rainsy is prime minister—for example—and he does not let me live comfortably and treats me badly, and I have forces that can fight back, that will make him live not comfortably either.”

Mr. Hun Sen also hit out at critics of the “culture of dialogue” he has promoted with Mr. Rainsy since last year’s political detente. The pair have touted it as an end to Cambodia’s historically violent political culture, but critics say Mr. Hun Sen will honor it only while it suits him.

The prime minister called for patience, saying that only time would tell whether the new culture is real.

“Wait and see first,” Mr. Hun Sen said. “If you don’t dive into the water, you won’t know how to swim and won’t know whether it is shallow or deep or hot or cold.”

Mr. Rainsy, who arrived in Malaysia last week with a number of other opposition party lawmakers for a meeting of the Council of Asian Liberals and Democrats, applauded the thawing of relations between himself and the prime minister.

“This is a symbol of national unity,” Mr. Rainsy said at the meeting with Mr. Hun Sen. “What we have begun, Hun Sen and I…is to start a culture of dialogue, which is a historic political chapter in Cambodia’s political stage.

“Now, the international community, our neighboring countries and journalists…are expressing support, admiration and acknowledgement that we Cambodians know how to find a method to discuss and respect each other.

“There are many countries saying that they want to take Cambodia as a model,” Mr. Rainsy claimed.

A new “culture of dialogue” was first proclaimed by Mr. Rainsy after a similar political detente with Mr. Hun Sen in February 2006, but it eventually faded away, with Mr. Rainsy fleeing to France for three years after being charged with several offenses related to his uprooting of a border post.

Despite this, Mr. Rainsy on Saturday mirrored Mr. Hun Sen’s call for patience while the culture develops.

“We have seen the presence of journalists who have kept track of us,” he said. “They wonder whether we implement the culture of dialogue seriously or for fun.

“Let’s wait and see,” the opposition leader recommended. “It will become stronger and stronger.”

Koul Panha, the executive director of the Committee for Free and Fair Elections in Cambodia, said it was not unusual for Mr. Hun Sen to promise a transition when facing strong opposition before later pouncing and reasserting his dominance.

“Hun Sen has talked many times like this with Sam Rainsy—like in 2006—saying that he would transfer power if he lost, but after that he tries to dominate politics and repress politics. It is not the first time this has happened. This happens during times when he needs to negotiate,” he said.

In a speech two months before the last election, Mr. Hun Sen pledged to stay as prime minister until he is 74, but rescinded that claim as bluster in March.

Mr. Panha said Mr. Hun Sen’s overt threats of force now might come back to bite him if his grip on power does slip at the 2018 national election.

“He should not threaten revenge of the military or anything… and should remove this sort of language to make the people feel more secure and tolerant,” Mr. Panha said.

“He assumes that everything is still under his control, but that may not be true. Only the support and tolerance of the people can guarantee his safety,” he said.