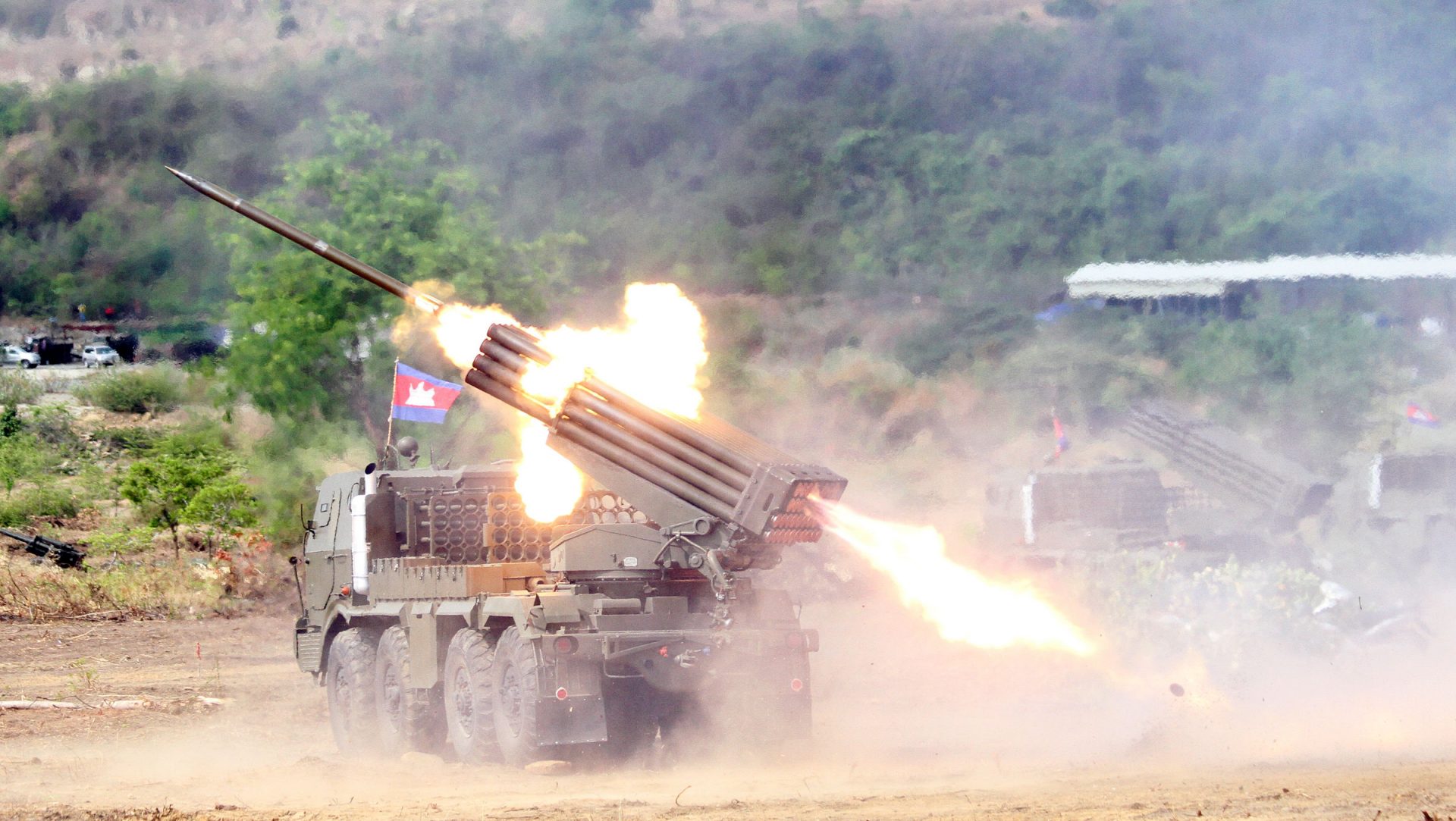 In a classic saber-rattling display, RCAF soldiers on Tuesday fired hundreds of expensive rockets and some artillery shells in a massive live-fire exercise in Kompong Speu province.

The exercise, the largest of its kind since 2010, comes just ahead of high stakes hearings at the International Court of Justice (ICJ) at The Hague starting April 15 that could decide ownership of a 4.6-square-km plot of borderland next to Preah Vihear Temple over which Thailand and Cambodia have engaged in several deadly clashes since 2008.

Speaking with reporters at the site of the well-publicized exercise, Defense Minister Tea Banh in­sisted that the Cambodian military was simply giving its new military hardware a normal test run, and that the show of strength had nothing to do with the ICJ meeting.

“It is new for us so we need to practice with them and prepare for when we need to use them,” he said.

Underscoring the government’s official line that the firing of hundreds of rockets had nothing to do with the hearing at The Hague, Prime Minister Hun Sen also insisted Tuesday that there was no muscle flexing in the affair.

“There’s no showing our muscle or anything,” Mr. Hun Sen said at the Annual Meeting of the Cambodian Mine Action Center at the Peace Palace in Phnom Penh.

“The Khmer don’t have any muscle to show, we just have this [live fire exercise]. Some are new and some are old [rockets]. We shoot them to see their capacity,” Mr. Hun Sen said.

“There’s no country in the world that doesn’t have weapons. But we’re not threatening to go to war with anyone. It’s just to protect ourselves and to train the soldiers so they know how to use them. If they don’t know how to shoot and it comes time to shoot, they won’t know where to shoot,” he continued.

General Banh declined to say when Cambodia bought the new truck-mounted BM-21 rocket launchers, who they were purchased from or how much the new military hardware cost the government. But he conceded that the weapons systems did not come cheap.

“We spent money to buy the new military equipment that is high quality, of course, and they were expensive,” he said without giving details.

When RCAF fired 200 BM-21 rockets in February 2010, Mr. Hun Sen said that the exercise cost $500,000. That was three years ago, with 400 fewer rockets, meaning that Tuesday’s military exercise cost at least $1.5 million in ammunition alone.

The 2013 national budget saw a nearly 16 percent year-on-year increase to the Defense Ministry, whose budget for this year will be $245 million, a figure that amounts to some 13.32 percent of the country’s entire expenditure for this year.

During the drafting of the budget last year, Gen. Banh said he needed the extra money to be better prepared along the Thai-Cambodian border.

The budget was passed without the approval of the opposition SRP who said it was wrong that defense should take the lion’s share of the 3.1 billion annual budget and that the education and health sectors should be prioritized instead.