News media should dare to speak the truth — especially against the “fake news” spread by “the outlawed rebel group and opportunists with foreigners behind them,” Prime Minister Hun Sen said in a letter to the Cambodian Editor Forum on Thursday.

The annual forum was organized by the Club of Cambodian Journalists, which is run by the editor-in-chief of a television station owned by a ruling party senator.

In his letter, Hun Sen said he considered news outlets to be participants in the government’s fight against corruption and attempts to reform the law, judicial system and public administration. 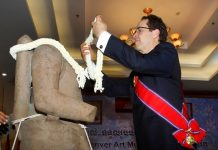