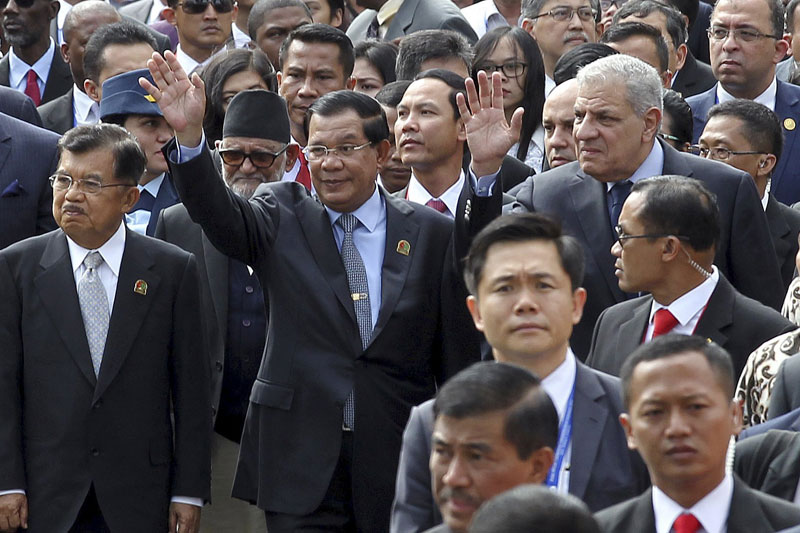 Amid the latest rapprochement between Prime Minister Hun Sen and opposition CNRP leader Sam Rainsy, the two men are scheduled to team up in Kuala Lumpur on Saturday as hosts at a reception for Cambodians working in Malaysia.

The event, which Mr. Rainsy announced Thursday evening on his Facebook page, marks the first occasion that the longtime political rivals have ever hosted an event abroad together.

It also falls in the lead-up to the 26th Asean Summit, which begins in Kuala Lumpur on Sunday and is expected to see Cambodia and Malaysia sign off on a deal allowing Cambodians to work in the country as maids. Cambodia has sent thousands of maids to Malaysia but put a freeze on the practice four years ago amid widespread reports of their abuse by both the families they stayed with and the recruitment agencies that sent them.

In his Facebook post, Mr. Rainsy said the joint event with the prime minister was meant to show that the “culture of dialogue” the two men have forged following the turmoil of 2013’s disputed national election was taking hold.

“Prime Minister Hun Sen and I want to show that the culture of dialogue works in all circumstances,” he said. “Even when we happen to be abroad together, respectively as prime minister and as opposition leader, we continue to respect each other and promote national unity by working together for the sake of the nation.”

CNRP spokesman Yim Sovann said it was a coincidence that the two men were going to be in Kuala Lumpur at the same time—Mr. Rain­sy left Cambodia on Friday—and so decided to take advantage of the occasion.

“The two leaders have met very often in Cambodia, but this is the first time they have met abroad to talk about the culture of dialogue,” he said. “Their meeting there is mainly about nurturing a democratic and united mindset.”

Mr. Sovann declined to elaborate on why Mr. Rainsy was traveling to Malaysia but rejected criticism that the CNRP president was now getting too cozy with the prime minister. The two men have traded countless bitter barbs about one another over the years, which made photographs of them taking in the festivities of the Khmer New Year together earlier this month jarring for some in the opposition.

“We have different opinions, but that doesn’t mean we have to treat each other as enemies and use weapons to solve issues,” Mr. So­vann said.

Council of Ministers spokesman Phay Siphan said the prime minister was in Indonesia and would be traveling from there to Kuala Lum­pur Saturday to meet with Mr. Rainsy.

“The culture of dialogue initiated by Samdech Techo [Mr. Hun Sen] has never happened before,” he claimed, going so far as to suggest that the very word “opposition” should be struck from Cambodia’s political lexicon.

“The opposition party remains, but that’s what it’s called by foreigners,” he said. “Now we have agreed to use new language; now it’s called a dialogue partner.”

In fact, Mr. Rainsy said he and Mr. Hun Sen were embarking on a culture of dialogue back in 2006, soon after being pardoned of dubious convictions and returning from exile in France.

Within four years, however, Mr. Rainsy was back in self-imposed exile in France avoiding a fresh batch of convictions that were widely seen as politically motivated. Mr. Hun Sen once again arranged for his pardon in 2013, just in time for Mr. Rainsy to return to Cambodia and campaign for the CNRP in that year’s national election.