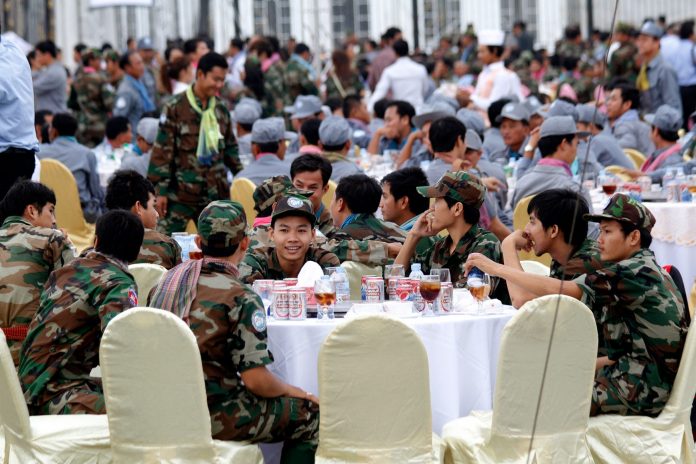 Prime Minister Hun Sen yesterday promised almost half a million dollars in cash rewards to student volunteers and officials, whom he congratulated on reaching a milestone in his nationwide land-titling program during an extravagant party on Phnom Penh’s Koh Pich island.

Addressing more than 5,000 volunteers—decked out in military fatigues—and officials, Mr. Hun Sen declared that the land-titling effort would be completed by June, just weeks before the country holds its national election on July 13.

The event was held to mark the conclusion of “Phase I” of the program, which has handed out 340,000 land titles to villagers living on 550,000 hectares of land. Mr. Hun Sen announced that the second phase would begin on January 15.

“The second phase could possibly be finished in June, ahead of the election,” he said. “I think that if the next phase could not be finished, it has to be delayed when the election comes otherwise there would be accusations [of electioneering],” Mr. Hun Sen added.

He said that during the second phase, 500,000 more families would be given land titles on a total of 1.8 million hectares of land.

“Not many countries do such a big operation,” he said.

Mr. Hun Sen said that the majority of those at the event yesterday would get $100 each from him and the CPP.

“I have to donate more than $400,000,” he said, adding that the Ministry of Land Management and the Council of Ministers should disseminate information on their websites to show what the government and the student volunteers have achieved.

During the party, which started at about 6 p.m., the attendees sat outdoors at hundreds of tables covered in white cloth, eating meals of fried shrimp, veal, fish balls, chicken and seafood salad, sour soup and rice. The camouflaged students washed it down with cans of Cambodia Beer.

Afterwards, student volunteers—some wearing kramas or caps embroidered with the words “Youth” and “For the sake of the motherland”—were invited to dance to a band led by the well-known singer Him Sivorn.

“Today, we stand at a very nice place with electricity and everything,” Mr. Hun Sen said, reminding the audience of the stark contrast between Cambodia now and Cambodia in January 1979, when the Khmer Rouge was overthrown by Vietnamese forces, an event set to be marked on its anniversary today.

He also thanked private companies for providing the food, drink and TV coverage for the event.

“The other day I said only one can is allowed for drink, but [my son] Hun Manith said that one is not enough to get drunk, and it would be OK to have two cans,” he said.

“It is the first time in my life  attending such a party,” said Ny Tha, 21, a student volunteer from Build Bright University in Phnom Penh.

“I am so happy to be at this party with high ranking officials.”

“This party coincides with the 34th anniversary of January 7, which will be held tomorrow, the day that Cambodian people regard as their second birth,” Mr. Manith said.

“They often said that if there had been no January 7, 1979, there would not have been everything like these days. The victory of January 7, 1979, did not happen accidentally, but through the struggle of the last generation.”