A Dublin-based human rights group has named jailed Beehive Radio station owner Mam So­nan­do one of a half-dozen finalists from around the world for its an­nual award for rights defenders.

Front Line Defenders an­nounced its list of finalists from among 90 nominees for its annual Front Line Award for Human Rights Defenders at Risk last week.

Mr. Sonando, who owns one of the country’s few independent ra­dio stations and heads an NGO that teaches rural communities about their human and voting rights, was convicted of fomenting a rural secessionist movement in November and sentenced to 20 years in jail.

Dozens of local and international rights groups have denounced the conviction—after a show trial that offered no evidence linking Mr. Sonando to the alleged insurrection—as a political move to silence a popular government critic.

While attending a regional sum­­mit here in November, U.S. President Barack Obama called him a political prisoner and urged Prime Minister Hun Sen to re­lease him at the risk of stalling bi­lateral relations. French Prime Min­ister Jean-Marc Ayrault also ex­pressed his “concern” about the conviction of Mr. Sonando, who holds dual French citizenship, in a meeting with Mr. Hun Sen on Sunday.

“The fact that Mam Sonando has been selected as a finalist for this award, from a total of 90 nom­inations from every region in the world, is a tribute to his cour­age and commitment to peacefully working to defend the rights of others,” Front Line spokesman Jim Loughran said on Wednesday.

“The award is a way of emphasizing that the work of human rights defenders like Mam So­nan­do is completely legitimate and the government of Cam­bo­dia should release him immediately and unconditionally.

Mr. Loughran declined to say who nominated Mr. Sonando but added that nominations usually come from other rights groups working in the candidate’s region and country.

He said the winner would be named some time in May or June and that past recipients have been presented with their awards by the likes of Ireland’s prime minister and the rock star Bono. The award comes with 15,000 euros, or about $20,291—a third for the winner and the rest to support the work of his or her organization.

Ou Virak, president of the Cam­bodian Center for Human Rights, said that his group and the U.S.-based Human Rights Watch were among those who nominated Mr. Sonando.

“He should be awarded be­cause he has contributed a lot to hu­man rights protection, in­clud­ing with the courts,” he said.

Association of Democrats secretary-general Huon Pannary, who has had to take over the reigns of the NGO since Mr. Sonando’s in­carceration, welcomed the news of her boss’ nomination.

“It is really important for him because everything he has done for the country and for the poor people,” she said.

What Mr. Sonando’s supporters want most is his release. Front Line hopes the added attention the award attracts for winners will act as added protection for them and their work.

The other five finalists hail from Colombia, Iran, Kenya, Maur­i­tania and Uzbekistan. While all have faced threats and intimidation, only Mr. Sonando and one other are currently in jail. 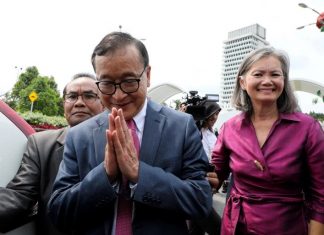 By
Al Jazeera
-
March 3, 2021
0
The country’s top opposition party was banned in 2018 and many of its leaders and supporters put on trial.