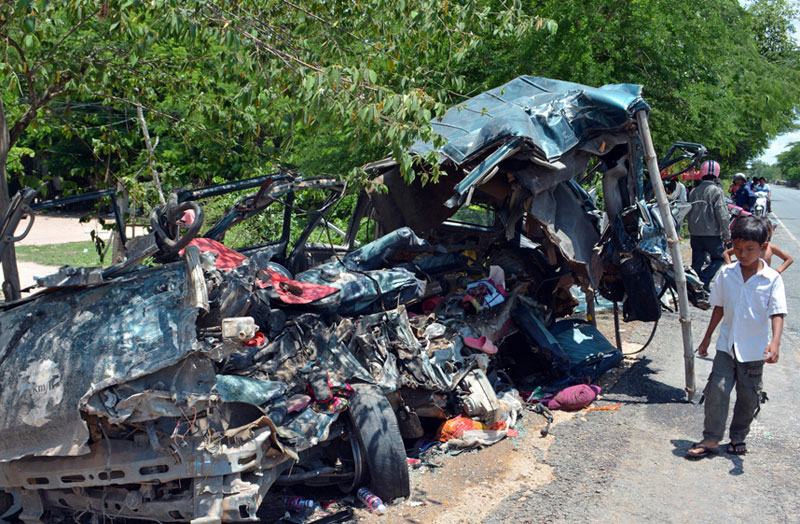 SVAY TEAP DISTRICT, Svay Rieng province – Seventeen garment workers and a driver died Tuesday morning when a bus rammed into an overloaded, 15-seat van carrying them and 21 others to work in Bavet City, officials said.

Duch Kahnaroth, a Svay Teap district police officer at the scene of the crash, said the accident occurred at about 7 a.m. and that 14 of the workers died at the crash site on National Road 1. Three more died of their injuries later in the day, while all 21 other passengers were injured.

“The bus was wrong because it tried to overtake a Camry car and hit the van,” Mr. Kahnaroth said. “The bus driver was arrested. He’s now detained at the district police station.”

The driver of the van, who died at the scene of the crash, was transporting his passengers to the Tai Seng Special Economic Zone in Bavet City, where they worked at a number of different garment factories. The bus, which belongs to the 15 SH Transport company, was traveling from Vietnam to Phnom Penh.

Nom Tola, 31, a motorbike mechanic who witnessed the crash, said he saw the bus slam into the van as it tried to overtake a car.

“I saw the dead bodies of 15 people,” he said. “I tried to help pull others still alive out of the van to put them in an ambulance. I saw victims with broken arms, legs and necks; some were alive and some were dead.”

Mr. Tola said that six people were on the bus, none of whom were seriously injured, and that bystanders dragged the bus driver out of the vehicle and punched and kicked him until police arrived and arrested him.

As police continued to investigate at the scene of the crash just after midday Tuesday, two employees of the 15 SH Transport company began removing company logos from the bus. They were quickly arrested by district police officers.

“I am arresting these two people for questioning because they took off the logo from the bus,” Svay Teap district police chief Keo Sophoan said. “They were aiming to destroy evidence.”

By about 1 p.m., deputy prime minister Men Sam An, accompanied by provincial governor Chieng Am, was at the provincial hospital handing out money to victims recovering from the crash.

But Dave Welsh, country director at the U.S.-based labor rights group Solidarity Center, who was at the hospital, said the gesture was misguided.

“It was nice of them to show up, and distribute money, but what was needed was ambulances,” he said. “They were families literally pleading to have victims transferred to Phnom Penh for better treatment and no ambulances were in sight.”

Mr. Welsh, who voiced his concern to the director of the provincial health department, said that once pressure was applied, four or five ambulances appeared within 20 minutes.

“Why that couldn’t have happened earlier remains a mystery to me,” he said.

Eight patients were eventually transferred to Phnom Penh. Two of them died on the way. One died after arriving.

Ke Rotha, the provincial health department director, dismissed questions about why it took hours to transfer the patients.

Thousands of garment workers risk their lives every day traveling to and from work, cramming into overloaded vans or standing upright in the back of flatbed trucks, because they cannot afford to pay for safer transport.

“They’re not able to travel with dignity,” said Mr. Welsh. “It’s the greed of the industry and the lack of money the workers have. It’s unacceptable.”

Mr. Welsh said garment workers receive a stipend of $10 per month on top of their wages, which start at $128. “It’s absolutely not adequate,” he said.

Crash victim Ouk Sokhon, 31, said from her bed at the provincial hospital that she had been using the same van to get to work for the past eight months. It costs her $20 per month.

“I am very lucky, for me and my baby,” said a pregnant Ms. Sokhon, who was sitting on the passenger side of the van and suffered only minor injures.

“I saw people with broken legs and arms,” she said, adding that she received $250 from Deputy Prime Minister Men Sam An. “It was terrible. I have never seen such an accident.”

As of last night, seven of the 21 injured workers who survived the crash remained in a critical condition, according to Run Rathvesna, the director of the Interior Ministry’s public order department, who is in charge of traffic accident statistics.