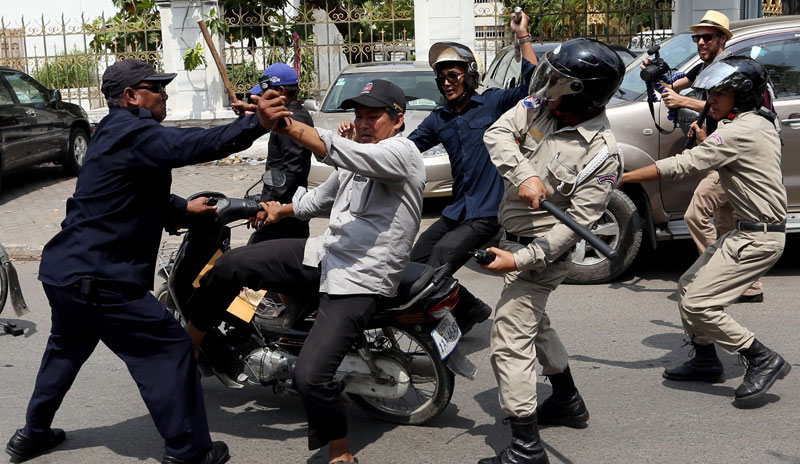 The squads of faceless guards who became the symbol of state repression following the disputed July 2013 national election should no longer be used to police demonstrations, Amnesty International said in a report released Thursday.

In “Taking to the Streets: Freedom of Peaceful Assembly in Cambodia,” Amnesty analyzes the months of tumult that began with disillusioned voters calling for change and descended into wild riots that saw seven people shot dead by state forces.

The report devoted a section to the Daun Penh district security guards, or “para-police,” who—armed with clubs, batons, slingshots and Tasers and wearing closed motorbike helmets and no identification—indiscriminately tore into demonstrators, beating men, women, journalists and monks.

“Amnesty International’s view is that the para-police who have been recruited cannot have had adequate training, as evidenced by their frequent use of excessive and indiscriminate force when policing protests,” Rupert Abbott, Amnesty’s research director in Southeast Asia and the Pacific, said in an email.

In the months following the election, the guards were deployed—along with police, military police and sometimes soldiers—to demonstrations mostly centered in Daun Penh district. The faceless guards, however, were always the government’s frontline, and they were always the most violent.

Nay Vanda, a senior human rights monitor for Adhoc who was also in the thick of many post-election protests in the city, likened the guards to sharks.

“When they see protesters, they see blood, and they go into a feeding frenzy,” he said. “They love violence.”

And along with their penchant for violence—many were seen kicking and beating people prone on the ground—the guards offered the government invaluable deniability.

According to the 2009 Law on Peaceful Demonstration, all forces deployed by the government to control demonstrations must “wear proper uniforms and display name plates and identity cards.”

The Amnesty report, however, detailed the many instances over the past two years in which that was not the case.

In September 2013, streetlights went out moments before plainclothes men beat and shocked women participating in a peaceful hunger strike at Wat Phnom, as well as the reporters observing them.

And in May 2014, a journalist was beaten to the ground, his cheekbone broken, after attempting to document the guards attacking activist monk Luon Sovath.

As questions arose about the guards’ identity, legitimacy and management, even the officials whose power they were protecting were unable to defend them.

“They are not in the right when they beat people,” said Lieutenant General Mok Chito during his time as acting Phnom Penh police chief in early 2014. “But it was a small case so we just closed some of our eyes.”

Kheng Tito, spokesman for the National Military Police, said of the guards: “We are not clear whether it is right or wrong with the law.”

In January 2014, government spokesman Phay Siphan said the much-feared guards were “police agents” hired by City Hall, according to a report in The Phnom Penh Post, just two weeks after City Hall spokesman Long Dimanche denied that the municipality had any control over the guards.

Contacted for clarification on the roles and responsibilities of the guards, Mr. Dimanche, the municipal spokesman, defended their actions, which he said were the result of orders from district governors.

“They do not act as police, judicial police or military police. They maintain public order on the roads and sidewalks,” he said, dismissing Amnesty’s report.

“I want to clarify that, with regard to all district security guards, Phnom Penh municipality received a mandate from the Ministry of Interior to create the public group,” he said.

But Amnesty said in its report Thursday that the use of violence by the guards had no legitimate justification.

“Amnesty International knows of no law or regulation granting the district para-police legal authority to use force against other citizens,” it said.