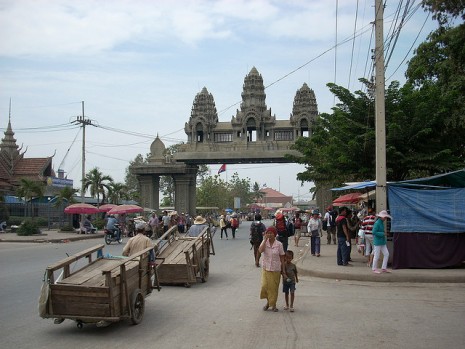 Graft—Not Such a Warm Welcome to Cambodia

Cambodia’s reputation as a wild frontier land may have softened over the past decade as its economy has grown and tourist numbers have increased, but its immigration officials at international border checkpoints and airports are continuing to leave the impression that graft is still the official modus operandi.

A Chinese journalist, Yu Jincui, wrote in the Global Times newspaper on Sunday about her experience of arriving at Siem Reap International Airport and being met by immigration police officials expecting a bribe, or “tip.”

“I pretended not to understand what he meant. But he didn’t give up. He picked a 10-yuan note [about $1.60] out of a pile of one-dollar and 10-yuan notes on his counter, waving it in my face,” Ms. Jincui wrote in the article titled “Chinese tourists should have enough courage to stand up to bribery.”

“When he saw I still had no plans to open my purse, he threw back the passport at me, grumbling in mixed Chinese, English and Mon-Khmer. Finally, he said with venom ‘No qian, no way,’” she wrote, using the Chinese word for money.

Ms. Jincui’s experience is more the rule than the exception.

At Phnom Penh International Airport on Tuesday, passengers arriving on a flight from Tai­wan claimed they too had paid immigration police officers small fees additional to the cost of their official visas.

Cham Nan, a 27-year-old Cambodian who lives in the U.S. and was visiting his homeland with his mother, said that he and his relatives always gave payments to officials at the immigration desk.

“We gave payments of 3 or 4 dollars at the immigration desk but it is understood to be a donation rather than an official payment,” he said in the arrivals area of the airport Tuesday.

And 38-year-old Tina Chu, in Phnom Penh on business from her home in Taiwan, said immigration officers had solicited her to pay a few dollars extra as a “tip,” which she paid to avoid any problems.

“I gave them $2, I don’t know what it was for but they were much more polite once I gave them the money,” she said.

Phnom Penh International Airport immigration police chief Chhour Kimny said Tuesday that he was aware his officers once levied a charge of about $5 dollars on passengers disembarking at the airport, but he claimed that efforts had been made to prevent them from continuing to solicit unofficial fees.

“We have actively sought to curb the charging of extra payments and will punish strongly any official who is discovered to have acted contrary to our internal regulations,” he said, adding that immigration department authorities had posted notices warning staff not to demand bribes from foreign visitors.

Yet another Cambodian-American arriving in Phnom Penh airport Tuesday, who declined to give her name because she wanted to enjoy her visit in peace, said in her experience it was standard practice to pay police officials a little extra at the immigration desk.

“Of course I paid them, I gave them $4, but this is what you are supposed to do,” she said.

With tourist arrivals increasing at a rapid rate—3.6 million visitors entered the country in 2012 generating $2.2 billion in revenue—potential grafted earnings for immigration police officials is growing all the time.

At the international checkpoint with Thailand in Poipet, which is notorious among backpackers for myriad cross-border scams, the rewards of graft are on display, with police officials sporting diamond rings often demanding additional sums of money from visitors seeking entry visas.

The shakedowns by immigration police are echoed at the border crossing to Vietnam at Bavet in Svay Rieng province and to Thailand in Koh Kong province, where one family of three was recently charged $5 per person for simply entering the country on a valid Cambodia visa.

Kiet Bunleap, chief of staff of the immigration police at the Thai border checkpoint in Poipet, insisted his officers are punished according to the law if they are reported to have solicited a bribe.

Mr. Bunleap then maintained that tourists often give “voluntary” tips to his officers.

“We do not force tourists to pay for entering Cambodia through the Poipet checkpoint—some police officials receive about $2 to $5 but this is up to the good mind of the guests,” he claimed.

Stuart Dolan, a 27-year-old engineer from Glasgow, Scotland, toured Southeast Asia before emigrating to Australia in May and crossed the Thai-Cambodia border several times at Poipet. Each time he was asked for an “extra” payment to get a visa.

“I crossed a couple of times from Thailand on a bus, and there were two guards by the visa window who pointed at a sign stuck to the desk that said ‘Express Visa’ and a price saying 100 baht [about $3],” Mr. Dolan said.

“I paid it the first time as you do, but the second time I pretended I didn’t know what they were talking about and after a minute of them winking at me and pointing to the sign they got a bit annoyed and told me to sit down and wait,” he said, adding that he waited about 20 minutes while people who paid the money got their visas ahead of him.

Preap Kol, executive director of Transparency International Cam­bodia, said that although in the past few years there has been an improvement in airport and border officials demanding bribes from tourists, the practice is continuing in a different guise, with tourists now being asked to “voluntarily” tip checkpoint officials.

“If tourists feel compelled to give money it gives a bad first impression to tourists and potential business investors,” he said.

Mr. Kol also said he was aware that officials are now more selective about the type of foreigners they ask on entering the country.

“They are aware that Westerners do not welcome being asked to pay for something extra to an official fee and may draw attention by being confrontational about it, whereas visitors from Asean countries seem more willing to comply because they do not wish to have a confrontation,” he said.

“Cambodian-Americans returning from abroad are particular targets for paying ‘tea money’ and are sometimes asked for as much as $20 or $30,” he said.

Khek Norinda, spokesman for Cambodia Airports, which operates the country’s three international airports, said that the solicitation of unofficial fees at airport checkpoints was an issue currently being discussed with the government but said details regarding any plans to tackle it were a matter for the government.

In March 2012, the Anti-Corruption Unit cooperated with Siem Reap International Airport to investigate security camera footage that captured an immigration official assaulting a Chinese tourist over failure to pay a bribe, according to the Anti-Corruption Initiative for Asia and the Pacific 2012 report published by the Asian Development Bank and the Organization for Economic Cooperation and Development.

Ho Vandy, chair of the state-private sector Tourism Working Group, said the Ministry of Tourism was working hard to address the issue since 2005, and the situation had improved at immigration checkpoints.

“Obviously we are still pending a few things, but we are moving forward with discussions to solve remaining problems for tourists entering the country,” he said.

At the airport Tuesday, Steve Aedin, a former expatriate in Cambodia from the U.S., who said he had paid immigration police in the past but not on Tuesday, was circumspect about the chance of stemming the practice once and for all.

“It is what it is—no one asked me for anything this time, but I used to live here and have been coming back for the last six years, so I have had my fair share of it. But you know where you are, right? This is Cambodia.”