Cambodian timber continues to make its way into Vietnam despite a blanket ban on exports there, government records from both countries show. 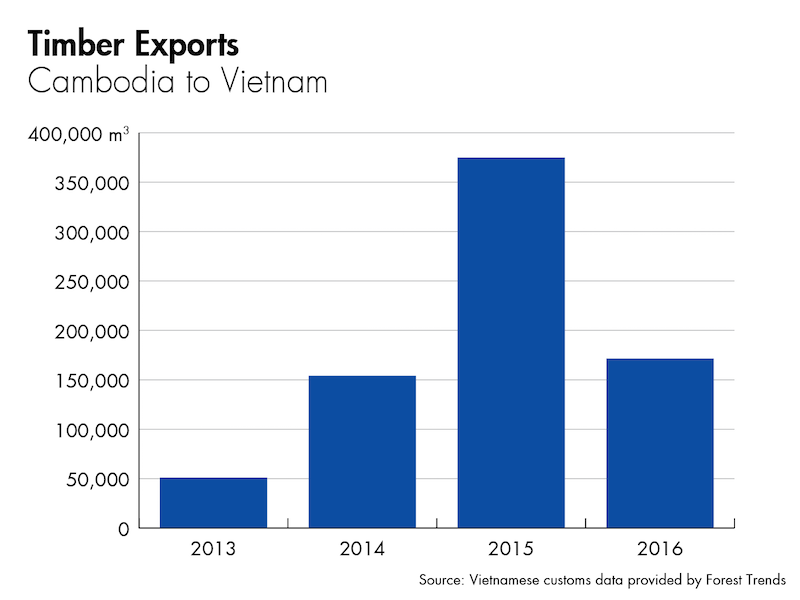 The Vietnamese data, obtained by U.S. NGO Forest Trends, amounted to less than half of 2015 imports, but exceeded the 154,000 cubic meters tallied in 2014.

Cambodian export records have also differed wildly from its neighbors in the past, with the government counting almost $1 billion less in wood exports than the rest of the world reported receiving from the country between 2005 and last year, according to figures the countries supplied to the U.N.

Xuan Phuc, a regional trade and finance analyst for Forest Trends, said while the drop compared to 2015 was significant, the export numbers were “still huge.”

The numbers appear to validate skepticism over the timber ban and crackdown enacted by National Military Police in January last year, with many having doubted that the military police would actually halt the relentless flow of Cambodian timber—often illegally logged—to Vietnam.

Mr. Hardke called the crackdown “more of a shakedown and business dispute” than a concerted effort to stop the trade.

“Logging and clearing in community forests is condoned, in some places even encouraged,” he wrote in an email. “Everything seems negotiable and more often than not, perpetrators miraculously escape identification.”

Eng Hy, spokesman for the National Military Police, repeated past claims that he could not verify the accuracy of Forest Trends’ reports without seeing them, in spite of regular questions about the amount of timber recorded moving across the border with Vietnam.

“We have never recognized any figures besides the reports of our task force, so I do not know the figure mentioned in the report from a customs office in Vietnam,” he said. “The national task force has a duty to stop illegal logging…so we have no time to find the source of the figures to prove whether the report is true or not.”

Previous articleMore Nauru Refugees Opt for Cambodia as Paths to US Narrow
Next articleLetter to the Editor: My Convictions Are Reminder of Corruption