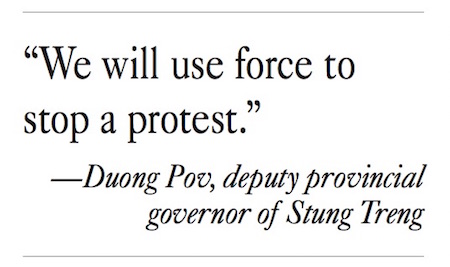 Officials in Stung Treng province say they will have boats and trucks at the ready to evacuate a pair of villages where residents are refusing to heed warnings that their homes will flood when testing of the nearby Lower Sesan II hydropower dam begins on Saturday.

Hundreds of people have already left the area of the dam’s anticipated 36,000-hectare reservoir for a resettlement site and compensation including new homes and farms. But more than 100 residents of Sesan district’s Sre Kor and Kbal Romeas villages have held out, worried they will lose a way of life central to their ethnic Lao culture and reluctant to leave land they have occupied for generations.

On Monday, deputy provincial governor Duong Pov said he had met with local officials and representatives of the holdouts to work out an emergency evacuation plan for any of the roughly 120 families that had not yet left.

“We have prepared about 20 trucks and fast boats to rescue people and transport them to the new relocation site if their homes get flooded after the dam closes on July 15,” he said.

The deputy governor said the Sesan river would rise 5 meters or more in a week and could inundate the villages within days.

“We have asked those families to leave their homes because the areas will totally flood if the dam is closed, but they refused, and we cannot use force to remove them,” he said.

Mr. Pov said authorities would also start demolishing a bridge spanning the river on Wednesday, after two prior attempts were thwarted by resistance from the holdouts—who fear losing their main route out of the village—and would meet violence with violence if necessary.

“We will use force to stop a protest, and if those people use violence against our authorities we will arrest them and let the court handle it according to the law,” he said.

Sut Thoeun, one of the holdouts who joined Sunday’s meeting, said he and his neighbors had yet to be convinced that the rising waters would reach their village, and they would stay put for as long as they could.

“Our villagers will not agree to leave because we want to see the real situation with the water after the dam is closed,” he said.

In any case, he said they had a contingency plan of their own should the government’s warnings prove true: a 200-hectare plot of land atop a nearby hill where they can start anew.

As for the bridge, Mr. Thoeun said the families would protest against any attempt to tear it down. The 400-megawatt Lower Sesan, a joint venture between Cambodia’s Royal Group and China’s Hydrolancang International Energy, will be the largest hydropower dam in the country once it starts operating in September.

Um Reth, a representative for Royal Group, said the reservoir should reach a maximum 68 meters in depth after one to two months of testing, a few more if the rains are heavier than usual.