“I’m not afraid so you should all not be afraid!” Mr. Sok shouted to more than 300 cheering supporters as he arrived at the Phnom Penh Municipal Court to face questioning over the comments that drew Mr. Hun Sen’s ire this week. 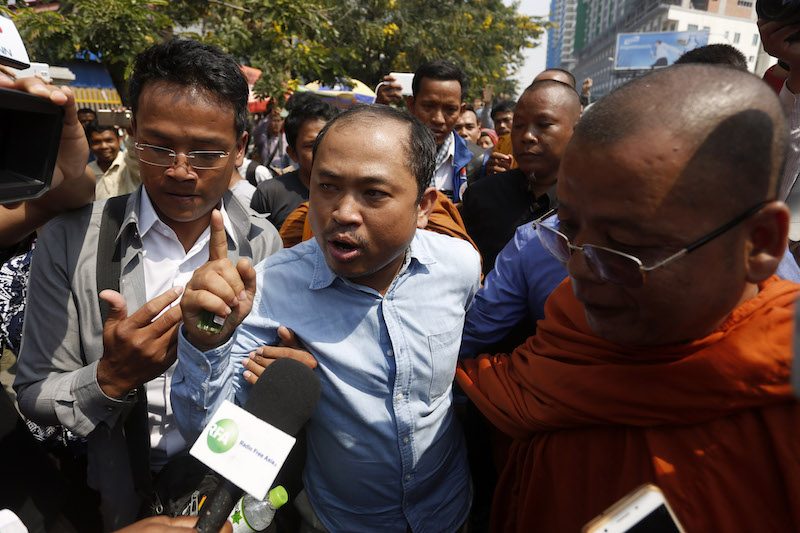 Kim Sok walks with supporters on Friday as he made his way from Wat Chas to the Phnom Penn Municipal Courthouse. (Siv Channa/The Cambodia Daily)

In an interview with Radio Free Asia on Sunday, the former university lecturer, who did not have a high profile until recently, claimed that the ruling party had man­ipulated the opposition CNRP and said later that “they” killed Kem Ley, a staunch government critic who was gunned down last July.

Mr. Hun Sen filed a $500,000 lawsuit the next day, accusing Mr. Sok of incitement and calling on the analyst to be thrown in jail.

Leaving Wat Chas early Friday morning, Mr. Sok walked the more than 5 km to the court alongside supporters, including dissident monk But Buntenh, briefly stopping outside the U.S. Embassy, where he was hugged and kissed by well-wishers.

Following more than five hours of questioning by a deputy prosecutor and an investigating judge, it was announced that the commentator had been charged and jailed.

The second charge carries a sentence of up to two years in prison.

Mr. Sok was swiftly put in a police car and taken to Prey Sar prison, as his supporters voiced their outrage.

Activist monk Luon Sovath said he believed the link between Mr. Hun Sen’s comments on Monday and the decision to summon Mr. Sok on the same charges later that day illustrated how the case was politically motivated.

“This court’s decision was made under the political and ruling party’s pressure,” he said. “That is why they detained him in prison.”

Among analysts, the jury was still out on Friday over the government’s decision to pursue legal action against Mr. Sok, who also is facing a second lawsuit, this one for 10 million riel, or about $2,500, that Mr. Hun Sen’s lawyer filed on Tuesday. The second lawsuit decried comments Mr. Sok made in another radio interview on Monday, in which he said a government-affiliated “network” was behind Kem Ley’s slaying.

Despite widespread suspicions that the government was behind Kem Ley’s murder, no concrete evidence has been made public.

Political analyst Lao Mong Hay, a former legal adviser to the CNRP, said he would have also taken legal action if Mr. Sok had made such accusations against him without backing it up with evidence.

“If I remained silent it would imply that I agree with…what has been said,” Mr. Mong Hay said, adding that analysts “should speak the truth.”

Analyst Cham Bunthet, an adviser to the Grassroots Democracy Party, said that he believed Mr. Sok’s words were reckless.

“What Kim Sok did, for me, I think it was a little too aggressive, too rude toward the government,” Mr. Bunthet said. “It’s good to show courage but courage needs to balanced with wisdom.”

That said, he also felt the CPP’s reaction was unnecessarily heavy-handed.

“The government, as the parents of the children, should educate children. They should give them ways to elaborate, to change their words, their behavior,” he said.

“I think the prime minister should ask Kim Sok to prove rather than just taking this very immediate reaction,” he said. “I think it just promotes hatred and anger, not a solution, and I think it’s not good for both the government and the people. Maybe the tension will rise.”

“It’s not analysis,” he said. “It’s harassment, accusation and subversion. But let the judges do their own job.”