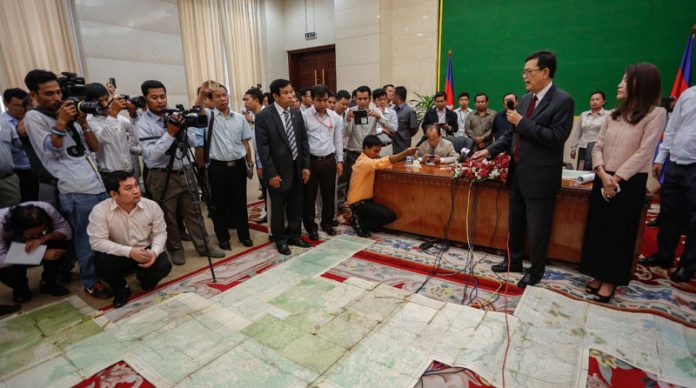 Var Kimhong, chairman of Cambodia’s Joint Border Committee, called a press conference Thursday to counter claims from the opposition that he will not release the government’s maps of the country’s border with Vietnam because they were drawn by the Vietnamese in the 1980s.

For more than a month, Mr. Kimhong has refused calls from CNRP lawmakers to release copies of the maps his committee uses to demarcate the border, leading to claims that he has not been using the official maps drawn by France in 1953 and mandated by the Constitution.

Before he presented the decades-old French-drawn maps to those assembled—including CNRP lawmakers Real Camerin and Um Sam An—Mr. Kimhong said that he hoped the gesture would end claims the government is still using maps drawn during the Vietnamese occupation of the 1980s.

“I would like to remind you of the very serious accusation against the Cambodian government laid by some excellencies and the public that we have used maps that are fake or wrong,” said Mr. Kimhong, who is also the minister in charge of border affairs at the Council of Ministers.

Mr. Kimhong said such claims were tantamount to accusations that the CPP government has “betrayed the country, because using the wrong maps for making the border causes our nation to lose land and sovereignty.”

“The maps being shown here is to avoid more of this criticism,” Mr. Kimhong explained. “So please do not take the border issue to make a campaign to get popularity.”

With his assistants laying dozens of the old maps on the carpet in front of his desk, Mr. Kimhong invited reporters and the two CNRP lawmakers to inspect their veracity—at one point warning Mr. Camerin not to step on the maps.

“The maps we are showing here are the Indochina Geographical Map and the 26 other map pieces that were found at our Geographical Department here when we were rescued in 1979,” he said. “Other maps we have gotten from the French geographical department.”

Mr. Kimhong spent the next hour presenting digital copies of the French maps of the border in provinces such as Kandal, Prey Veng and Kampot, explaining that Cambodia and Vietnam had placed border markers precisely according to the map.

Yet Mr. Sam An, a lawmaker for Battambang province who has helped to lead the CNRP’s recent border campaign, disputed Mr. Kimhong’s assertion that markers had been placed in the appropriate locations in Kampot.

Mr. Sam An cited as evidence a recent trip by CNRP lawmakers there, leading to a dispute with one of Mr. Kimhong’s assistants, who said he had also recently visited the area and the markers were correct.

Last month, the CNRP circumvented Mr. Kimhong’s refusals to release its own maps by collecting a scanned digital copy of the French maps from the National Geographic Institute in Paris.

On Thursday, Mr. Kimhong said he would still not provide the opposition with copies of the government’s maps, but would be happy to examine the CNRP’s maps to determine whether they are legitimate copies of the French-drawn maps.

“Let our experts verify them and give him back the results,” Mr. Kimhong said, referring to CNRP President Sam Rainsy. “I will not provide [the government’s maps] because we have already showed them to him.”

Mr. Rainsy said by telephone Thursday he believed Mr. Kimhong’s reticence to release his maps for public scrutiny suggested the minister is still hiding something, but said he would be happy to provide his own maps to be verified.

“Of course, but I expect reciprocity to clarify if their maps are fakes,” Mr. Rainsy said, adding that briefly displaying the maps did not allow the CNRP to verify their veracity or check if border posts have been accurately placed.

“You may say you have now presented the correct map, but how have you used those maps? We want to see the maps to verify them, and to verify how you have made decisions to delineate the border,” Mr. Rainsy said.

“Var Kimhong’s presentation, rather than giving answers, has raised even more questions,” he added.

In an impromptu second press conference outside the Council of Ministers on Thursday, which immediately followed Mr. Kimhong’s but was cut short by security guards, Mr. Sam An offered his interpretation of events.

“In brief, these maps were drawn by the Yuon in the 1980s,” said Mr. Sam An, using a term for Vietnamese sometimes considered derogatory, before a security guard shooed reporters away from the lawmaker.