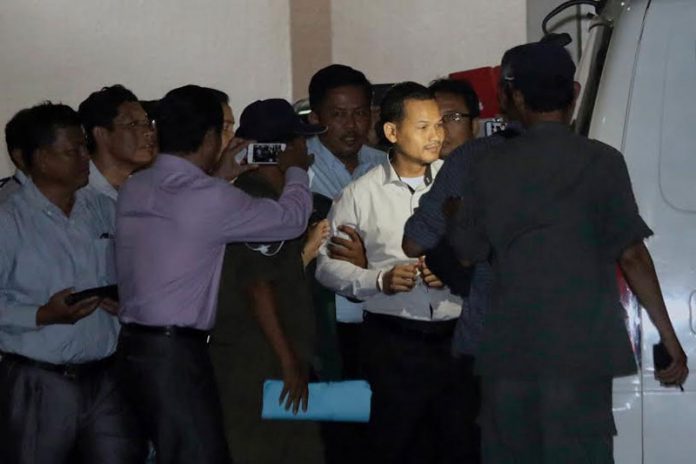 In the face of growing criticism over the arrests of 15 activists and opposition figures last week, the government has released a statement defending their detention and emphasizing its commitment to “fighting impunity.”

Ten female land rights activists, three Buddhist monks and two opposition CNRP figures were arrested between Monday and Thursday last week for participating in or planning to join protests. In a pair of snap decisions, 11 of the 15 were tried, convicted and sentenced by the Phnom Penh Municipal Court and are now serving one-year jail terms.

The statement—dated November 14 and penned by Council of Ministers spokesman Phay Siphan —says the government is “committed to strengthening the rule of law” and would not give in to calls to release the activists.

“The Royal Government of Cambodia refutes and condemns all words and any individual, group or institution that has accused and exaggerated and put the blame on [it]…without real grounds, which has caused the public to misunderstand [and think] that the government is putting pressure on the CNRP,” the statement said.

The swift justice meted out last week stands in contrast to the courts’ tender treatment of government officials and well-connected individuals accused of committing crimes.

Among recent high-profile cases are senior CPP lawmaker Cheam Yeap’s involvement in a deadly hit-and-run in Kandal province last year, which was never pursued by the provincial court, and the 2012 shooting of three garment workers by former Bavet City governor Chhuk Bundith, who has never served jail time for the crime.

Contacted Sunday, Mr. Siphan reiterated that the government was unable to intervene in the judicial process, adding that “everyone has to be civilized and learn to respect the rule of law.”

“It’s premature to ask the government to put pressure on the court to release those people—we can’t do it,” he said.

Mr. Siphan said that those imprisoned “had their own lawyers and could go to the Appeal Court” if they were unhappy with the sentences handed down last week.

On Sunday, protesters continued to call for the release of the group.

About 200 people, including relatives of those detained, marched from one wing of Prey Sar prison to another, where they prayed and released balloons.

Accompanied by six siblings, Sieng Sok Heng, 18, joined in support of her mother, Phoung Sopheap, who was jailed Thursday for protesting outside the Phnom Penh Municipal Court on Tuesday.

“We demand that the government release her, so she can come home and look after us,” she said. “Without her, we are living in a very difficult situation.”

Am Sam Ath, technical supervisor for local rights group Licadho, said it was hypocritical not to pursue arrests in obvious cases—such as the fatal shooting of five protesting garment workers on Phnom Penh’s Veng Sreng Street in January—yet pursue them in seemingly spurious ones.

“How can these actions have been used to get rid of ‘impunity’ in society, as [the activists] did not commit any crimes or kill any people?”

On Friday, Amnesty International became the latest human rights group to condemn the arrests, issuing a so-called “urgent action” to its members asking them to write to the government in protest.

“Amnesty International considers that the 11 individuals who have been imprisoned should never have been prosecuted in the first place,” Amnesty’s statement said.

“They were simply exercising their human right to freedom of peaceful assembly, which is provided for under the International Covenant for Civil and Political Rights, to which Cambodia is a state party, and the Cambodian Constitution.”