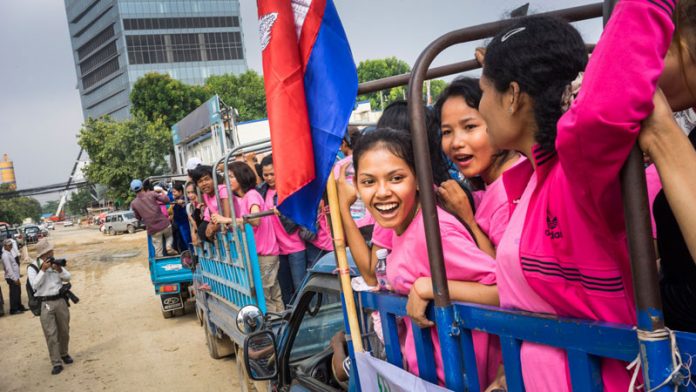 More than 1,000 garment workers gathered in Phnom Penh and marched through the city center Sunday, demanding a “decent wage” from their factories, the largest garment-sector demonstration in the capital since military police fatally suppressed a protest for higher wages in January.

Six unions teamed up to organize the rally, aimed at putting pressure on the government to approve a hefty raise to the industry’s monthly minimum wage, now set at $100. The Labor Advisory Committee—composed of government, factory and union representatives—is set to make a wage recommendation to the government next month, with a new floor wage scheduled to take effect in January.

The unions deliberately avoided demanding a specific figure Sunday—unlike a smaller “day of action” in September, when workers called for $177 per month—but have been asking for a raise of at least $50. The factories say they can’t afford more than a $10 wage hike.

Sporting bright pink T-shirts that read “We want a decent wage,” the workers, from Phnom Penh and surrounding provinces, gathered at Freedom Park in the early morning before beginning their march.

“We demand a decent wage because we want a decent living, good health and to send our children to school,” Ken Chhenglang, acting president of the National Independent Federation of Textile Unions in Cambodia, told the crowd.

Last month, the International Labor Organization said a recent sample survey of the country’s 600,000 garment workers found that two-thirds of the laborers did not consume enough nutritious food to stay healthy, more than 40 percent suffered from anemia and 15.7 percent were underweight.

“We came to join the protest because we can’t live on today’s wages,” said Yuos Makara, a garment worker from Phnom Penh. “We spend it on electricity, on water, on rent, on food and we send some money back home. Sometimes, we have to borrow money from other people to cover our expenses when we get sick.”

From Freedom Park, the workers marched to the nearby U.S. Embassy and then on to the European Union’s country office, delivering a petition at each stop urging foreign governments to put pressure on Cambodia to approve a significant raise. The unions also want U.S. and European brands that buy from Cambodia to increase the prices they pay Cambodian factories, to help make a raise possible.

Outside the National Assembly, the workers submitted their petition to lawmakers from the CNRP and CPP, who vowed to help.

CNRP lawmaker Ke Sovannaroth, who heads the Assembly’s labor commission, told workers that Labor Minister Ith Sam Heng had been invited to answer questions about the minimum wage and other labor issues on Tuesday, but had not yet replied.

Though Sunday’s rally was the largest garment-sector demonstration since January 3—when military police shot into a crowd of rock-throwing protesters outside the Canadia Industrial Park, killing five people and injuring dozens more—some of the country’s biggest unions skipped the event.

The unions who organized the event said they chose not to invite the larger unions, accusing them of consistently telling their smaller counterparts what to do, while simultaneously shunning their input when making decisions.

Kong Athith, vice president of the Coalition of Cambodian Apparel Workers’ Democratic Union, the largest of the independent unions, said his group was simply too busy with other work to rally its members for the event.