The message from garment manufacturers to the government on Thursday was loud and clear: Change now, or the industry may start to whither away.

“Again, I repeat, and I’m tired of repeating the same thing: Bribery, bureaucracy and corruption are impeding the industry,” said Van Sou Ieng, president of the Gar­ment Manufacturers Associ­ation of Cambodia, to an audience of more than 100 factory owners, union representatives and government officials at the Hotel Inter-Continental. “If we don’t tackle this now, we won’t be able to maintain the industry.”

Though most in the industry were confident factories would not disappear en masse at the end of the year, it was apparent the government needs to make changes for the industry to maintain factories and stay competitive.

“If under-the-table payments remain ongoing, our production will not be able to compete with other countries,” Minister of Commerce Cham Prasidh said at the event.

The ADB made several recommendations to the government to help the industry. In addition to taking steps to reduce corruption, the study suggested computerizing export documentation, improving the productivity of the work force and promoting investment in so-called “backward linkages”—locally produced dyes, zippers, buttons and other materials—to speed up delivery.

“Let’s hope the government is serious about changing,” said one garment factory manager at the conference. “There is hope here for the industry to survive, but there’s also hope in other countries that factories will relocate.”

Government and industry officials said Thursday the country has been successful in its labor-friendly nation branding, helped by actress Minnie Driver’s visit to the country earlier this week. Orders have increased as a result of the labor compliance policy, they said, and buyers who left previously have returned.

Yet even with those efforts, and if all the study’s recommendations become a reality soon, the industry still faces steep tariffs to the US market.

Government and industry officials are urging the US to reduce tariffs, and an industry official said the topic came up when US congressional staff members visited the country last month. It is also expected to arise during a meeting between Cham Prasidh and US Trade Representative Robert Zoellick in Singapore in the next few days, the official said.

“Eliminating or reducing US tariffs for Cambodia would be a drop in the ocean for the US,” the industry official. said. “We think the US can be that generous.”

US spokesman David Gainer had no information Thursday on whether the US is considering a tariff reduction. 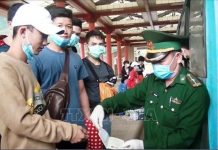 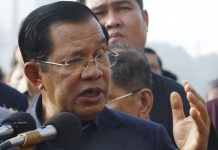 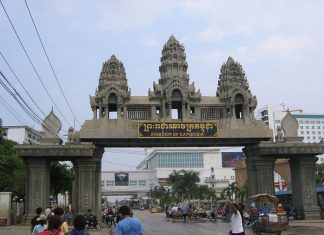 Support for Kingdom in Russia FTA