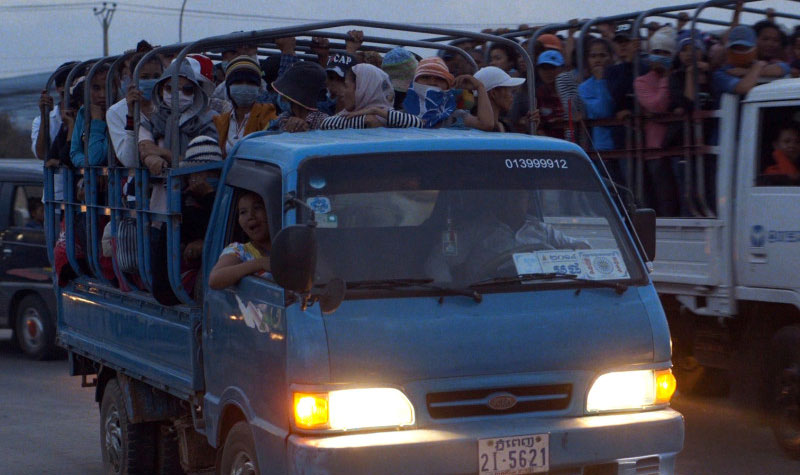 The grim realities of Cambodia’s garment industry are laid bare in a new documentary film that exposes the devastating impact cheap clothing is having on people and the environment.

The film, “The True Cost,” was shot over two years in countries including Cambodia, Bangladesh and Haiti, and traces fast fashion’s rise to the top of the global garment chain—and the lives of the 1 in 6 people on the planet who are part of it.

In Phnom Penh, viewers are shown scenes of the mass demonstrations in January 2014, when tens of thousands walked out of factories to call for a $160 minimum wage.

As the days wore on and there were increasing scuffles between police and protesters, a violent crackdown by security forces ensured. Gunfire rings out, then screaming. A bloodied man is shown being carried away by fellow protesters.

“[W]e just want a proper salary to make a decent living with dignity,” says one worker who is interviewed in the film.

“But the government doesn’t care about how poor we are or how much suffering we’ve faced. They don’t care about the workers at all.”

“What struck me the most was the spirit of the people. There is a great growing awareness of human rights among the workers that is leading them to stand up and fight back,” he said in an email.

More than one year on, garment workers are earning a minimum monthly wage of $128—an increase from the $80 base wage before the strikes began in December 2013.

However, higher wages have not led to better conditions across the garment sector. Just this month, 19 people were killed when a bus crashed into an overloaded van transporting garment workers to factories in Svay Rieng province.

“It is a heartbreaking and sobering reminder of what is at stake here,” Mr. Morgan said of the fatal crash. “Human life is perhaps the most precious thing there is and to see it carelessly taken away in the name of constant consumption is sickening,” he added.

The “True Cost” is the latest in a number of overseas productions or books attempting to move consumers by showing them the workers who are paying the real price for cheap clothing.

“It will benefit the workers because buyer countries will know the real situation, that the workers have been living in, suffering and exploited by the employers,” she said.

Asked what he wanted the film to achieve, Mr. Morgan said he hoped it would spark a “household conversation” about fashion purchasing habits, and thereby improve conditions for garment workers.

“I hope the rest of us are able to get behind them and support that fight and that the spirit of the people [in Cambodia] spills over into other countries like Bangladesh,” he said.