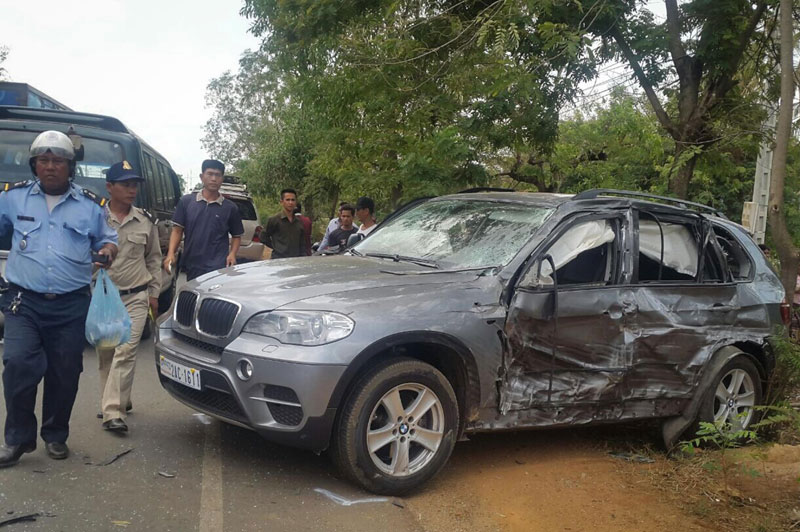 Prince Norodom Ranariddh was slightly injured and his wife sustained a serious head injury on Saturday in a car accident in Kompong Cham province that a Funcinpec spokesman called a deliberate act of “terrorism.”

Prince Ranariddh and his wife, Ouk Phalla, were among eight people injured when a large truck collided with their BMW X5 SUV and another car on National Road 7 in Kompong Cham’s Prey Chhor district at about noon, according to provincial traffic police chief Long Meng Se.

“There were eight people injured, and two of those were female. And there were two people seriously injured—one man and one woman. Some were hit by the window [of the SUV],” he said.

Another car carrying Prince Ranariddh’s bodyguards was also involved in the crash, the police chief said. He said the driver of the truck fled the scene of the accident, but that police were investigating some leads.

Funcinpec spokesman Nhep Bun Chin, who was traveling in the convoy of cars that accompanied the prince on Saturday, said Ms. Phalla sustained major head injury and was sent for treatment in Bangkok.

“I think that it was not unintentional, and we must look deeply into this case to discover the cause, because the cars were driving in two directions and were in two lanes,” Mr. Bun Chin said.

“We were in a convoy and were going very slowly, about 30 kph…but the dirt-truck driver avoided the [other cars] in the convoy but hit Prince Ranariddh’s car…and then dragged and hit his bodyguards’ car.”

“It avoided the convoy but hit his car. That makes us have doubt, and it must have been intentional,” Mr. Bun Chin said. “For this incident, we consider it to be terrorism.”

Y Sokkhy, director of the anti-terrorism department at the Interior Ministry, said an investigation into whether the crash was an act of terrorism would not be carried out unless provincial authorities refer the case on.

“Now, the Kompong Cham provincial authorities are investigating this case, and we only know that the incident was caused by a traffic accident,” Mr. Sokkhy said.

Mr. Bun Chin’s accusation is not the first of its kind.

CNRP Vice President Kem Sokha, a former senator for Funcinpec, resigned from the royalist party in October 2002, days after a black car side-swiped his vehicle in what he claimed was an assassination attempt.

Earlier that year, Sam Rainsy Party lawmaker Yim Sokha died in a car accident while driving to Sihanoukville, with Mr. Rainsy, the current CNRP president, asserting at the time that foul play was involved.