From Pharmaceuticals to Palm Sugar, Helping a Country Heal

Born in 1953, Hay Ly Eang is the same age as independent Cambodia.

But unlike his home country, which was torn apart by war and political conflicts in the decades that followed independence, Mr. Ly Eang managed to avoid much of the turmoil after leaving the country for a career as a scientist and entrepreneur. 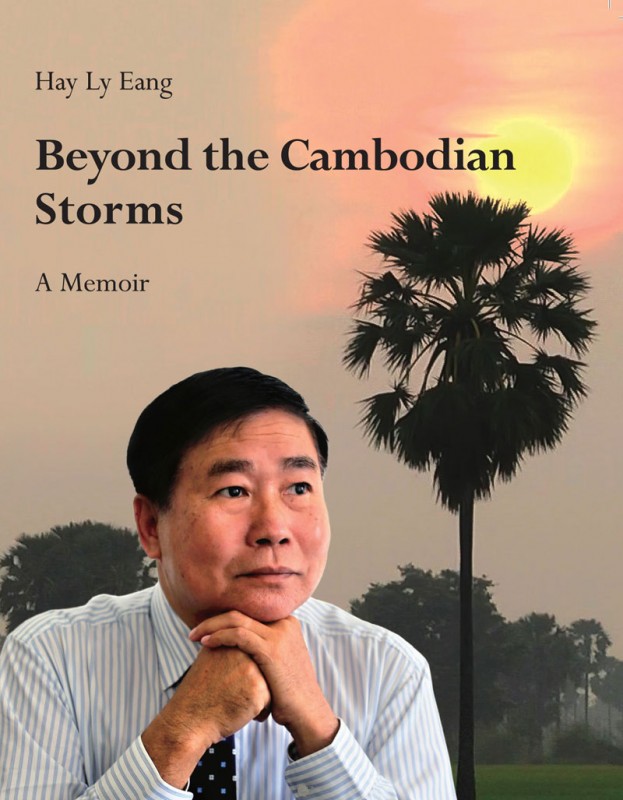 As he writes in his memoir “Beyond the Cambodian Storms,” which was launched on Friday in Phnom Penh, he would use his connections and experience as a pharmacist and businessman in France to help his country heal.

“Our national heritage is not summed up by the spectacular Angkor temples alone, which justifiably excite our pride,” he writes in the book, which was published in English, Khmer and French through Sipar book publishing.

“But they belong to history. Our environment, our countryside, our local productions, and our know-how constitute our present heritage today, of which too many of our compatriots are still unaware, torn as they are between a lost past and a globalized future dominated by brand names that are obliterating local identities.”

Mr. Ly Eang’s personal philosophy was formed during his early life in a small community in Kompong Cham province called Chi He.

A prosperous area home to about 2,000 people with a nearby port, there was a strong community spirit and pride in education. According to Mr. Ly Eang, the local high school that he attended also counted among its graduates Sam Nhean, the grandfather of opposition leader Sam Rainsy; Say Chhum, the current president of the senate and vice president of the ruling CPP; and Khieu Samphan, the former Khmer Rouge head of state.

Besides preparing Mr. Ly Eang to reach the top of his class at university, growing up in Chi He instilled in him a way of thinking that clashed with what he saw upon arriving to study in Phnom Penh in 1969, when Prince Norodom Sihanouk was still in power.

“To me, Phnom Penh appeared to be a human conglomerate with neither uniformity nor solidarity,” he writes. “The rich and powerful were living a life of opulence without a glance, other than of contempt, for the less fortunate.”

When Prince Sihanouk was ousted in 1970 and, in a radio message from Beijing, urged people to join the Khmer Rouge to defeat the newly-created government of Lon Nol, Mr. Lay Eang was stupefied. That the prince would be angry to have lost power, fine, he writes.

“But how could he call on people to kill one another? The murderous brutality of Lon Nol’s soldiers against the peasants shocked me just as much.” When people from the countryside marched on Phnom Penh expecting Prince Sihanouk to return to the country, Lon Nol sent in the army. “I woke up to politics with the conviction that war was never the only solution,” he writes.

In early 1975, having postponed several times his plans to leave for France, where he had a scholarship to study pharmacy, he suddenly felt an inexplicable urge to finally make the move. He flew out of Phnom Penh on March 30, 1975, as the Khmer Rouge were about to take over the country.

In France, he obtained a doctorate in biochemistry, worked in research for a time, opened a pharmacy in 1983, and soon developed the first of many products, a form of isotherapy that he called Tabastop, to help a colleague who was trying to stop smoking.

In the early 1980s, he would use his pharmacy distribution network to send medicine to Cambodia, which, since the Vietnamese army with some Cambodian forces had ousted the Khmer Rouge regime in 1979, was under U.N. embargo except for essential goods.

In 1991, Cambodia’s political factions signed the Paris Peace Agreement following the end of the Cold War and the dissolution of the Soviet bloc. Mr. Ly Eang was weary of a wave of new development funding being brought into the country through an administration overseen by the U.N.

“The UN left with a poor outcome. Much of its money served to build personal fortunes placed abroad, the democracy it left behind was illusory, the Khmer Rouge were still waiting in ambush, and the poor still suffered from lack of healthcare and education,” he writes.

“In 1992, I discovered a Cambodia that was literally sick,” Mr. Ly Eang writes. “Illnesses that were once eradicated reappeared. Tuberculosis, malaria, chronic diarrhea, etc., went at the population relentlessly.”

Mr. Ly Eang set up a network to distribute medicine, working with the Health Ministry to stop the sale of counterfeit medicine. But he soon decided that medicine should also be produced domestically, starting with Kinal, a painkiller first developed and manufactured in the country in the 1960s.

Establishing a plant that met international standards took several years, and it was only in 2004 that Pharma Product Manufacturing (PPM) opened in Phnom Penh. Today, Kinal and the company’s other products are sold in Cambodia as well as in about 20 African countries.

“Our products easily found a place [in Africa] because the pathologies there are similar to those we treat in Cambodia,” Mr. Ly Eang explains. He also created the Kinal Foundation to produce and distribute a nutritious porridge for babies and young children in poor areas of the country.

“The farmers work day-to-day, selling their raw products to traders. The added value brought by the processing of agricultural products eludes the farmer and with it, the hope of upward mobility, which would trigger a virtuous circle to escape from poverty and ignorance,” he writes.

He searched for a product that could be marketed as being uniquely Cambodian. The answer was sugar palm, the sap of the trees that can be found almost everywhere in the country.

“In the 1990s, the sugar palm climber lived below the poverty line—one dollar per day per       person—and each month there were as many victims who lost their lives or were seriously injured from falling as there were victims of antipersonnel mines,” he writes. “You have to be poor to overlook physical safety, worse, risk your life twice a day during the six or seven months of the dry season that sap extraction lasts.”

Working with a French laboratory, he developed a process to filter the sap and produce pure palm juice. The sugar obtained Ecocert International organic certification, and then received the Palme d’Or award at the organic-product trade show NatExpo in Paris in 2005.

Mr. Ly Eang and his team also managed to get a “protected geographical indication” in 2009 for palm sugar from Kompong Speu province, and expanded their product line to include wine and vinegar.

“I thought that the most useful way to help our country was to promote the creation of a wide network,” he writes.

“First, only enterprises produce value and can therefore offer employment. Second, I see it as the only way not to be at the mercy of globalization. If we don’t believe in ourselves and in our creative capacities, foreign investors will become the masters in our country, and we can bid farewell to our national independence.”