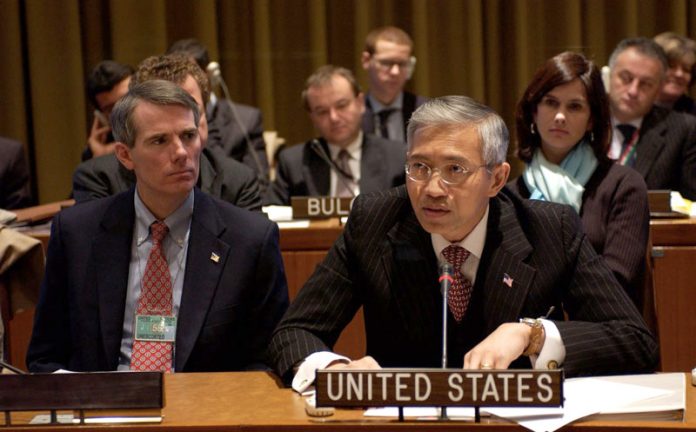 Sichan Siv, a former U.S. ambassador to the U.N., was summoned by the Phnom Penh Municipal Court last month and ordered to remain in Cambodia following allegations that he and two business partners defrauded a Phnom Penh dentist out of $1 million, officials have confirmed.

The order came after a complaint was filed by Eng Lykuong, owner of Master Care Dental Clinic in Chamkar Mon district, who alleges that in 2012, the businessmen conned her into investing $1 million in an agricultural firm, Akra Agriculture Partners, which has remained inactive since she invested.

Mr. Siv, a Cambodian-American, served as U.S. ambassador to the U.N.’s Economic and Social Council from 2001 to 2006 and is the author of the celebrated Khmer Rouge survival memoir “Golden Bones.” In 2012, he returned to Cambodia and began to promote Akra, which was registered in the U.S. and billed as an ambitious rice farmers’ cooperative that would help maximize profits for Cambodians on the lowest rung of the economic ladder.

“The prosecutor of the Phnom Penh Municipal Court has summoned San Richer, Sichan Siv, Thomas A. Willems, and William R. Nojay to come to the court to answer questions regarding the complaint by Eng Lykuong,” the letter states.

It also orders judicial police to “monitor all the routes, in the air, on the ground or on the water, to prevent [the accused]…from leaving Cambodia for other countries temporarily.”

Interior Ministry spokesman Khieu Sopheak confirmed that the ministry was following the court order, but said that Mr. Siv and Mr. Willems had left the country before it was issued, while   Mr. Richer and Mr. Nojay had remained in the U.S.

“The court ordered [Mr. Siv] to not leave the country, but he was already abroad before it was issued,” General Sopheak said. “If he were a resident of Cambodia, then we could do something, but he is a U.S. citizen and he lives in the U.S.

“If he lived in Cambodia, then we could do something,” he added.

Ms. Lykuong said she visited two companies in Cambodia with Mr. Siv and Mr. Willems, which they claimed had signed business agreements with Akra. She said Mr. Siv’s reputation convinced her that the investment opportunity was genuine.

“I read his book and knew his profile—that’s why I put down $1 million,” she said in an interview Friday.

“I sold a plot of my land to get the cash to wire it to the U.S…. I did not think that he would damage his profile for such a thing.”

The dentist said she wired $1 million in three installments in late 2012 and early 2013 to help complete the necessary $4 million capital investment required to establish the company. Under the deal, she was supposed to be made a member of the board of directors. But it quickly became apparent that something was amiss, she said.

The new company’s first board meeting “was supposed to take place a few weeks after sending the money but it never took place,” Ms. Lykuong said, adding that she subsequently discovered that the company was not operational and that the supposed deals with Cambodian businesses had been fabricated.

“If the start-up business had failed and gone bankrupt, I was prepared for it and would have accepted it. But they set up a fake company to trick people out of money,” she said, adding that she has since spent $60,000 in legal fees.

“I filed the complaint so that they will be brought to justice and pay me back the money and a [$200,000] fine. Returning the money is not enough. They have to be punished accordingly,” she said.

Mr. Siv did not respond to multiple emails requesting comment. Ing Kereya, a lawyer for Mr. Willems and Mr. San, declined to comment.

One of the companies the men claimed to have struck a deal with, according to Ms. Lykuong, was Sok Keo Import Export Co.

“They said their company was registered in the U.S., but when I typed their company’s name in the U.S. business website, which registers thousands of companies, I did not see their company,” Mr. Roisat said, adding that their proposal was also unorthodox.

“They proposed to buy rice at $900 per ton, but offered us a greater share of the benefits if they could make $1,600 per ton—but they would only pay us the money later if they sold all the rice,” he said.

Kim Savuth, president of the Federation of Cambodian Rice Exporters, said that Akra had approached him a few years ago and that he had been initially intrigued with the company’s plan to create large-scale cooperatives.

But his optimism rapidly faded.

“First, [Mr. Siv] said they wanted to help us grow more rice and that they [would] help us do this, allowing us to pay back what we owed them in rice, instead of cash, over a 10-year period,” Mr. Savuth said.

“But then they asked us to put forward money to create the co-ops, and we explained that the farmers are too poor and already owe a lot of money to the bank,” he said, adding that no agreement was ever reached.

Government spokesman Phay Siphan, who at one point acted as a liaison between the plaintiff and Akra’s partners, declined to discuss the case.

“The U.S. citizen San Richer is a friend, but this is a private matter and both sides are being represented by their lawyers,” he said.