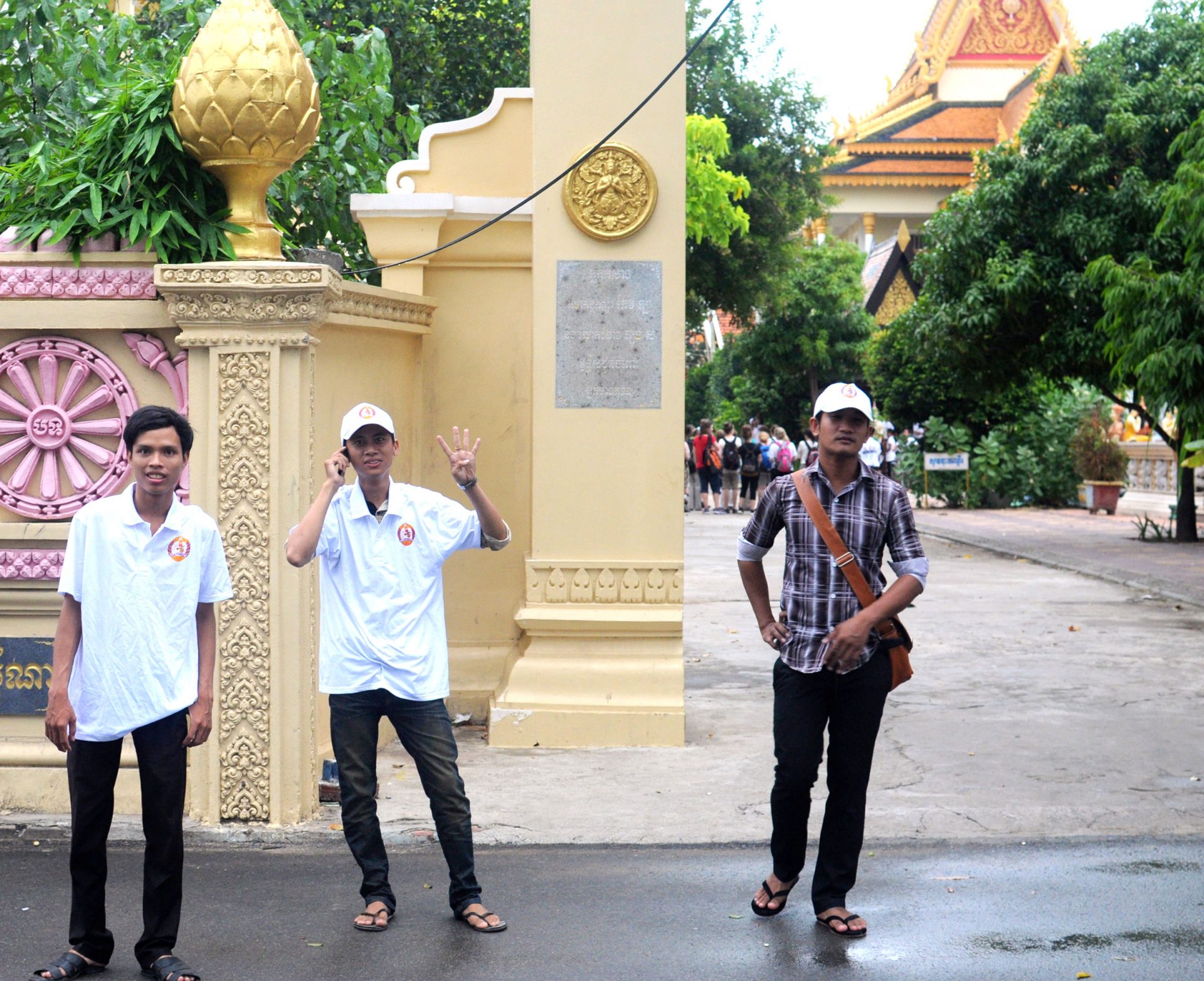 Where have the “Pagoda Boys” gone? For a decade, the ostensible youth movement earned a reputation as enforcers for the CPP, using pagodas as a base for their activities.

Once known for breaking up garment factory demonstrations and staging counter demonstrations against the political opposition, they may not have made the news much lately, but the Pagoda Boys have not become less active in the run-up to the election, just less visible.

At Wat Botum Park on Wednes­day, kitted out in campaign colors, many of the seemingly CPP-supporting youth were from the pagodas who turned out as flag-wavers because they had been instructed to do so by student au­thorities in the pagoda.

Orn Piseth, a 22-year-old student from Svay Rieng province who is now staying at Wat Than, said that he and his friends were each given 10,000 riel, or about $2.50, to join the ruling party’s rally. Like many of the young campaigners, he does not support the CPP.

“The head of the students at the pagoda wants all of us to vote CPP, but it is our right to vote how we want—I prefer the CNRP [Cambodia National Rescue Party],” he said, adding that he had been paid to join other pro­tests, including the recent de­monstration against CNRP vice president Kem Sokha over his alleged claims that Tuol Sleng prison, where thousands were killed during the Khmer Rouge era, was a Vietnamese fabrication.

“We didn’t know anything about [the Kem Sokha] protest, but we went because we are Pagoda Boys and we received the order from the head of students in my pagoda,” he said.

Mr. Piseth’s sentiments were echoed unanimously by almost a dozen students interviewed in four of Phnom Penh’s 27 pagodas this week. All said that they were paid to participate in campaign rallies or demonstrations at the behest of the student head, who operates inside each of the pagodas as a representative of the Pagoda Boys Association.

“Students go to the rallies to show their faces so that the party knows they attended the rally…[otherwise] they face a difficult living situation in living standards,” said a 23-year-old university student from Battambang province staying at Wat Botum who would not give his name as he works as a part-time administrator for a government ministry.

“Students are poor, so they also go to the rallies for the money, but their minds are directed toward another party,” he said, adding that despite working for the government, he will vote CNRP because he agrees with their policies.

Krouch Kuy, a 23-year-old student from Siem Reap province who stays at Wat Ounalom, said that for the first day of the electoral campaign, the association requested more than 150 youths from his pagoda alone to join the inaugural CPP rally, which started on Koh Pich .

“I go because I live under the management of the association and I must follow its order to help society because it has helped us and built this pagoda,” he said, though he said he did not know yet which party to vote for.

According to Ham Vannak, head of students at Wat Ounalom, an estimated 4,000 non-clerical young men reside in Phnom Penh’s pagodas, which have a long tradition of providing free accommodation and food to poor youth from the countryside while they go to school or attend university in the city.

Yet the term Pagoda Boys refers to the association that manages the students, not the students themselves. It is shorthand for the Pagoda Children’s Intelligent­sia and Student Association—an officially registered NGO. Its president, Seng Sovannara, is a member of the CPP and was appointed undersecretary of state at the Ministry of Justice in 2011. He declined to answer any questions about his organization.

“Most of the boys are newcomers and are honest and loyal and not aware of the extent of the organization’s activities,” said Chin Channy, who used to be a monk at Ounalom pagoda.

“But the organization has core units and core groups of activists, organized by overall management, which convene any time the authorities want or need them to act,” he said,

However, the primary function of the organization is away from the spotlight, Mr. Channy said.

“Yes, they are an NGO but they get all of their funding from the CPP, and they have the role of watchdog within the pagodas—not for the government, but for the CPP alone. They are an instrument of the party, entirely under its control, which closely monitors any person who voices opposition, whether it’s a monk or a Pagoda Boy.”

The head of students and a Pagoda Boy’s Association representative at Wat Botum, who would not give his name because he was afraid of getting into trouble, said that since both the president and other governing members of his organization are high-ranking CPP officials, he believes it is in their interest that the government wins the election.

The former head of the Pagoda Boys inside Wat Ounalom from 1990 to 2008, Khenh Hang Hourn, insisted that the association exists to perform humanitarian work, but he agreed that the government does ask its students to “volunteer” when needed.

Mr. Hang Hourn was at Wat Ounalom when former monk Mr. Channy decided to give up his robes. Mr. Channy said that he saw little sign of any social services being offered by the organization.

“The head of Pagoda Boys Association then was Mr. Khenh Hang Hourn. He would keep his eyes open on all activities of any monk who might have been suspicious of supporting [the opposition],” he said, adding that everything he did, everywhere he went and every time he talked he felt like he was being watched.

“A group of former friends who remain in robe showed me their CPP membership cards in 2004 or 2005—they said they had no choice but to…accept these cards for survival, or else face homelessness,” he said.

“As a result of the Pagoda Boys…there is no voluble dissident or supporter of parties other than [the] CPP in almost any pagoda,” he added.

While monks who speak out on social issues have faced criticism for betraying non-partisan principles, in reality, the CPP has long held political sway over the Buddhist hierarchy in Cambodia, with the Venerable Tep Vong, the clergy’s great supreme patriarch, declaring his support for the ruling party in 2003.

The Pagoda Boys, critics say, are the CPP’s attempt to keep it that way.

A 30-year-old monk, who has been at Wat Botum for 10 years and declined to give his name because he did not want to bring trouble on the pagoda, said that although many monks and Pa­goda Boys support the CNRP, they must hide their activities.

“In every pagoda, not just monks but students too live under the pressure of authority. They say that the CPP builds the pagodas so we must repay them, but it is a government’s duty to build things,” he said, adding that despite intimidation, he believed monks and students understood their voting right.

“Voting day is our right to vote however we want, and most will vote CNRP,” he said.