Authorities in Mondolkiri province on Tuesday arrested five men after stopping their vehicles on a dirt road inside the Snuol Seima Biodiversity Conservation Area and finding more than 40 lengths of illegally logged, first-grade wood on board.

“We stopped them while they were transporting wood from the forest in Sre Chhouk commune, Keo Seima district,” Long Seng, deputy director of the Interior Ministry’s economic crime police force, said on Wednesday. “We confiscated the two tractors and found 42 pieces of Sokrom wood in total.”

Mr. Seng said police arrested the three Cambodians and two ethnic Vietnamese transporting the wood and sent them—along with the logs—to the conservation area’s headquarters for questioning, though they had yet to determine where they were headed or who they were working for.

Mr. Seng said his officers joined provincial police and local Forestry Administration rangers in carrying out the operation, which was led by provincial court deputy prosecutor Chea Sovanthet, who could not be reached for comment.

The case contrasts sharply with the seizure of a cache of illegally logged wood the same day in Pursat province.

In that case, district police arrested two soldiers transporting the logs on National Road 5 in the back of a Royal Cambodian Armed Forces truck. The wood, truck and soldiers were all handed over to the local Forestry Administration division. When contacted on Tuesday, however, division chief Pol Chantha said he turned the soldiers and truck over to their brigade that afternoon on orders from “the boss,” whom he refused to identify.

The military’s involvement in the country’s illegal logging trade is well documented, with arrests, seizures or reports involving the armed forces occurring on a near-weekly basis. The government claims that the soldiers involved are rare exceptions, though independent investigations have identified entire military units operating virtually as de facto logistics operators for the loggers.

Two soldiers are currently among the suspects in the deaths of a police officer and a Forestry Administration ranger who were fatally shot while on patrol for illegal loggers in Preah Vihear province last month. 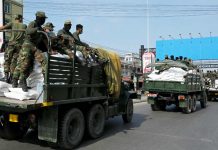 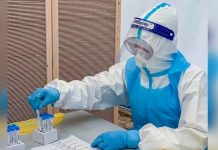 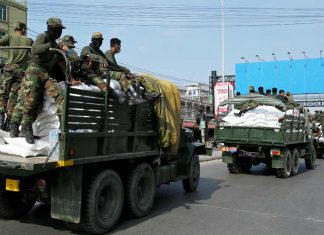