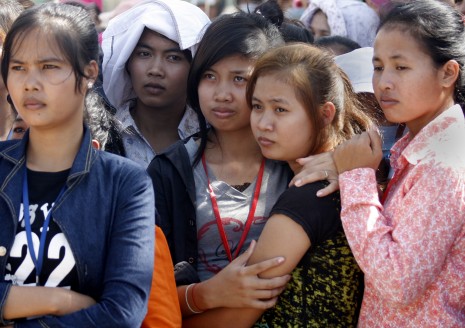 Phnom Penh’s garment factories are operating at a greatly reduced capacity as workers return home to the provinces in droves in response to the government’s decision to increase security after the opposition warned they plan to hold mass demonstrations against the election results.

Ken Loo, secretary-general of the Garment Manufacturers Association in Cambodia, said the current exodus of workers from factories could “seriously impact” the industry.

“Obviously, this has the potential to seriously impact the garment industry, but the government and the unions are doing what they can to keep workers calm and assure them that they are safe,” he said. “But in the end, only the workers can decide what to do.”

Factories and garment workers’ unions yesterday said that in some cases, almost 80 percent of workers had left their jobs to go back to the provinces, with most heeding their families’ warnings of social unrest if the opposition CNRP decides to hold demonstrations contesting the results of last month’s election.

“Our regular number of staff is 900 and we are currently operating with 200,” said administration manager Khit Van. “Over the election time, we have not had as much work so we have permitted some of our workers to leave, but many went home a few days ago because they fear the demonstrations will be violent.”

Meas Vanny, a legal officer for the Coalition of Cambodian Apparel Workers of Democratic Unions (CCAWDU), Cambodia’s only independent union, confirmed that garment workers were flocking to their home provinces because of the perception that demonstrations by the opposition will lead to social unrest.

“I have received information from our representatives in each factory, and they have told us that at least 20 people per day are asking for permission to take a week off because parents are pleading with their sons and daughters to come home,” she said.

Keo Chinda, the CCAWDU representative at Top World Garment factory—which partially collapsed in May injuring 23 people—said Thursday that only 150 workers remained out of 850 prior to the election, though some have been permitted to leave the factory in Kbal Koh commune because there has been a drop in orders.

Nhim Bunrith, general manager of Apsara Garment Co. Ltd. in Pur Senchey district’s Choam Chao commune, said his factory employs more than 1,000 workers but about 40 percent of them have now returned home in the past three or four days.

“It is seriously affecting my business because I have contracts with buyers, but even if I cannot meet their quotas, I still must pay $5,000 dollars to cover factory overheads each day,” he said, adding that workers are listening to alarmed parents who clearly remember the factional violence in Phnom Penh following the 1997 election, and the previous decades of civil war.

With garments making up 80 percent of total exports, the sector is already confronted with a labor shortage even when all workers in the industry are present.

In the first half of this year alone, garment and textile exports were worth $1.558 billion, an increase of 32 percent on the same period last year.

Last week, Minister of Social Affairs Ith Sam Heng released a statement calling on all employees, unions and employers to disregard rumors that opposition protests would lead to chaos on the streets of Phnom Penh, and implored factory production to continue as normal. “Please don’t believe the rumors and spread them around,” he said.

“Just a small sample by our staff of two factories today showed that 30 to 40 percent of workers came to collect their pay checks [this week] and did not return to work,” she said, adding that because there is already a labor shortage at most factories, this presents a serious problem for the industry.

Mao Thora, secretary of state at the Ministry of Commerce, expressed concern yesterday about the trend of workers leaving Phnom Penh’s factories.

“If workers return home, factories will face closure due to their inability to fulfill contracts, and if companies do not have goods to export, then the Ministry of Commerce will lose revenue,” said Mr. Thora.

“Therefore, we will do everything we can to make people trust that the government is seeking only to protect the security of the people—this is a very important point to get across.”

In the aftermath of the national election, the government has moved hundreds of soldiers and several armored personnel carriers into Phnom Penh and last night tanks were spotted heading in the direction of the capital after leaving the Sihanoukville Autonomous Port .

Nineteen-year-old Si Sreyno, who works for Bayon Garment Factory in Russei Keo district, said she returned to her home in Kampot province’s Dang Tong district on Tuesday after having received her paycheck a day earlier.

“My father phoned me to warn me about the demonstrations so I decided to go back home,” she said.