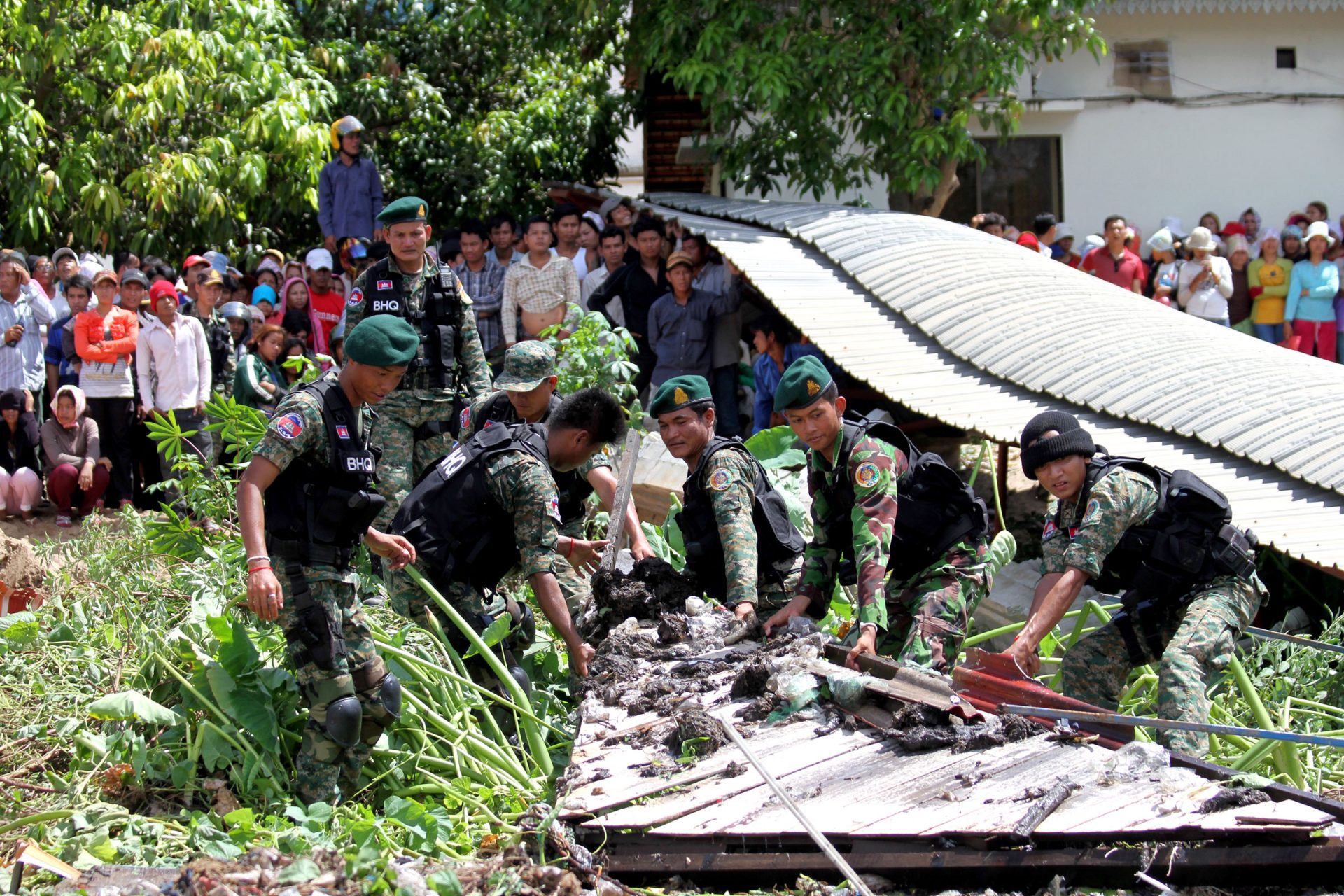 The dining hall of a garment factory in Phnom Penh’s Meanchey district that supplies clothes to U.S. brand Gap collapsed into a pond Monday, injuring more than 20 workers who were eating lunch, workers and officials said.

The hall, which is part of Top World Garment (Cambodia) Ltd. in Kbal Koh commune but outside the main building, collapsed at 11:40 a.m., according to commune police chief Mao Rith.

He added that the concrete bridge connecting the cafeteria—which was raised over a fetid pond—to the main street had also collapsed.

“Thirteen workers, including a five-month-pregnant woman, were sent to the Khmer-Soviet Friend­ship Hospital, while 10 others were sent to the district referral hospital,” said district governor Kuoch Chamroeun, adding that the cause of the dining hall’s collapse was un­clear.

Speaking from the hospital, Say Phearum, the 27-year-old pregnant woman, said she heard a sharp cracking sound before the floor gave way into the dirty water. As she was near the exit, she immediately started running across the bridge, she said.

“[The hall] collapsed and I quickly ran out. When I reached the middle of the bridge, the bridge also collapsed along with the hall,” Ms. Phearum said, adding that workers fell into the water and swam to land.

Her baby was unharmed, Ms. Phearum said, adding that most of the workers had sustained only bruises and cuts.

Seang Yon, a representative for the Coalition of Cambodian Ap­parel Workers Democratic Union, said the factory had filled the pond with sand in the past.

Factory representatives will discuss compensation plans for the injured workers today, said Koch Ouspea, the factory’s administration chief, who denied the factory had filled in the pond.

The accident comes only five days after another factory in Kompong Speu province experienced a ceiling collapse that left two workers dead. Government and factory officials said Monday the Taiwanese-owned Wing Star Shoes Co. Ltd. was safe enough for staff to go back.

“Tomorrow, the workers will return to work so that the production chain will not be affected,” said Oum Mean, secretary of state at the Ministry of Labor.

But Japanese sports brand ASICS said the factory should not open before a full safety inspection is complete.

“ASICS’ first priority is to investigate the cause of the accident and to ensure those affected receive appropriate and adequate care. Produc­tion can only resume once the thorough investigations are completed by all relevant parties and the facilities are declared 100% safe for the workers to operate again,” Katsumi Funakoshi, general manager of Asics Corporation’s public relations de­partment, said via email from Japan.

Cambodia National Rescue Party (CNRP) election candidate Mu Sochua, who visited the families of the two dead workers on Sunday in Kong Pisei district, said the CNRP is demanding a transparent inspection of Wing Star Shoes, as well as all the other factories in the country.

She also called for the prosecution of all the individuals who were involved in the oversight of the building’s illegal construction.

“We need to have accountability, which to me, seems to not be in the vocabulary of the officials,” Ms. Sochua said. “There should be full charges and prosecutions for the deaths of these people.”