A former police officer was sentenced to life in prison on Wednesday for raping, torturing and murdering his 20-year-old girlfriend in Phnom Penh nearly two years ago.

Hong Kalidin, then a 27-year-old police cadet, was arrested in October 2014 after police discovered the body of his girlfriend, Song Davin, a first-year accounting student, floating in the Tonle Sap river, her body covered in bruises. Mr. Kalidin was subsequently charged with murder accompanied by torture and cruelty. 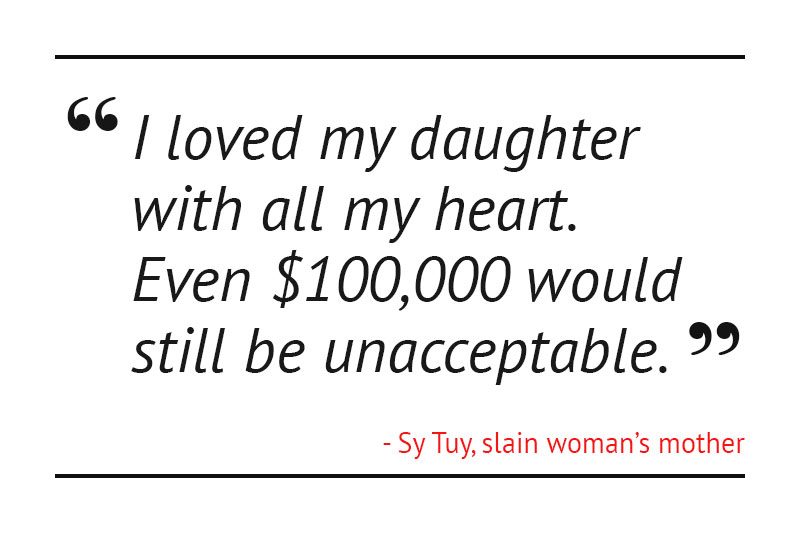 On Wednesday, Presiding Judge Veng Hourt told the Phnom Penh Municipal Court that Mr. Kalidin’s brutal crimes required a life sentence and cost him 20 million riel, or about $5,000, to be paid to Song Davin’s family.

The slain woman’s mother, Sy Tuy, 54, told reporters after the sentencing that no amount of money could make up for her daughter’s loss, but that 20 million riel nonetheless seemed too little.

Mr. Kalidin’s lawyer, Puth Dimong, said the verdict was outrageous, contending there was no evidence linking his client to the murder. Sperm found on Song Davin’s body was never determined to be Mr. Kalidin’s, he said, while her bruising—thought to be caused by a belt—could not be linked to any of the suspect’s belongings.

“I am not satisfied with this verdict,” Mr. Dimong said. “I have to appeal.”

During his trial this year and last—hearings started in October—Mr. Kalidin said he picked up Song Davin from her home at 2 a.m. on October 4, 2014. After spending the night and following day together, Mr. Kalidin testified, he dropped her off at Pencil Supermarket on the riverside on October 5 and never saw her again.

A witness told the court that he saw Song Davin on the evening of October 5 at the Mekong nightclub in Russei Keo district. This testimony was called into question during a June hearing, however, when the witness was shown a photograph of an unrelated woman and incorrectly identified her as Song Davin.

Mon Keosivin, a lawyer for Song Davin’s family, said Mr. Kalidin had committed an elaborate crime, destroyed evidence and left almost no clues for police. He said he too would appeal the sentence, seeking a larger compensation package.