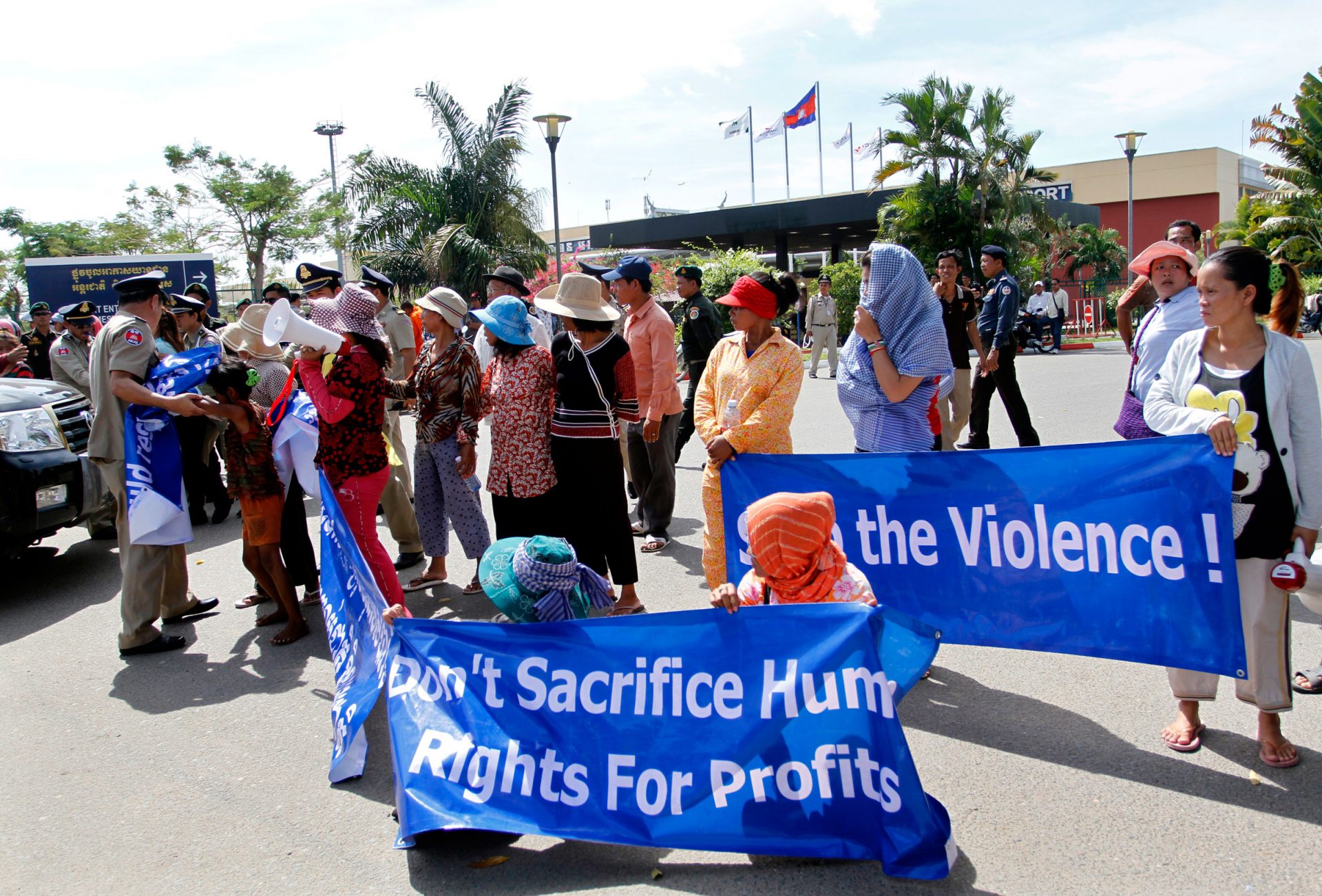 About 20 people protesting their pending eviction from homes near Phnom Penh International Airport blocked people from leaving or entering the airport for about half an hour on Wednesday, before a large force of police broke up their protest.

About 20 residents of Choam Chao commune’s Thmar Kaul village were joined by 30 anti-eviction protesters from the Boeng Kak and Borei Keila communities in their attempt to block the entrance to the airport. About 100 police and military police finally forced the protesters off the road at around 9:30 a.m.

“We came here today to submit a petition to find a solution for all of us before the upcoming election,” said protester Kheay Savy.

“I don’t understand why they used so many police to stop our protest on the road because we just wanted to submit a petition letter with [Cambo­dia Airports, which operates the country’s three international airports] demanding appropriate compensation if they take our land,” said Chray Nim, another of the Thmar Kaul residents.

In July, authorities told 182 families that their homes were in the way of a security “buffer zone” around the airport, and that they needed to clear out ahead of the arrival of world leaders for two summits late last year. In November, the residents staged a protest ahead of U.S. President Barack Obama’s visit, plastering pictures of Mr. Obama on the roofs of their homes to draw attention to their plight. Since then, further information about the planned evictions has not been forthcoming from officials.

The residents insist they own their land legally, as local government officials had recognized their property transactions and house constructions over many years. But the municipal government has re­jected those claims, saying they built their homes illegally regardless of what commune and district of­ficials ack­nowledged in terms of their land purchases and construction.

Say Sokhan, secretary of state for the State Secretariat for Civil Aviation, met with the protesters Wednesday morning and informed them that their eviction was necessary as their houses were too close to the runway and posed a safety threat.

“The government is worried about the safety of the airport when world leaders come to visit Cambodia,” Mr. Sokhan said.

He declined to elaborate on details of the pending eviction, but said that the Council of Ministers had established a task force—of which he is a member—and that compensation would be provided, though he refused to give any de­tails of what that might entail.

If the houses are not removed, the International Civil Aviation Organization could blacklist Phnom Penh International Airport, he claimed.