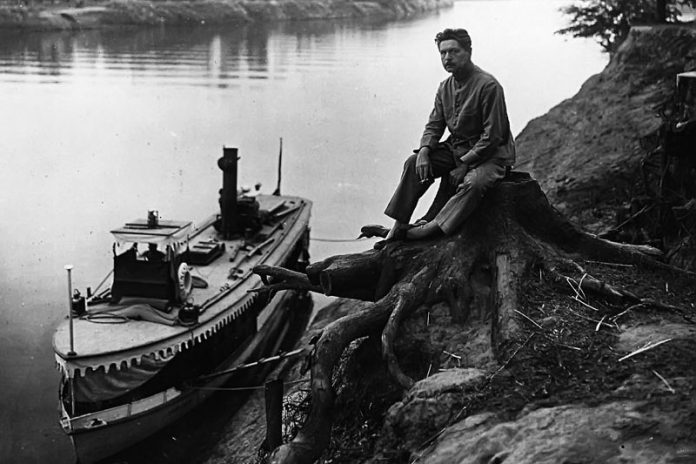 Seventy years ago Thursday, during what may have been the murkiest period of the French administration in Cambodia, the founder of the National Museum died in an interrogation room at the hands of Japanese authorities.

World War II had already ended in Europe—following the unconditional surrender of Germany’s Nazi government in May 1945—when George Groslier died on June 18, 1945. In Asia, the German defeat prompted its ally Japan to arrest all French people in Indochina.

“World War II seen from Asia was drastically different,” said French historian Henri Locard. Not only had it begun at least two years earlier than in Europe, when Japan attacked China in 1937, but it ended months later, he said. It would take the U.S. dropping atomic bombs on Japanese cities and the Soviet Union declaring war on Japan to prompt Japan’s surrender in August 1945.

All told, Cambodia was mostly spared during that world conflict, Mr. Locard said. Having sided with Germany in 1940, authorities under France’s Vichy government let Japan spread its armies through Cambodia, Vietnam and Laos.

Admiral Decoux, Cambodia’s French administrator at the time, had two major goals: to please France’s German ally and make sure that the French retain control of the country, Mr. Locard said.

As an extension of Germany’s policy of Jewish extermination, Adm. Decoux fired Suzanne Karpeles, the Jewish secretary of the Buddhist Institute.

He also suppressed commune elections and crushed a movement for the country’s independence that involved an emerging class of Cambodian intellectuals and several monks. One of the monks, Hem Chieu, was sent to a penal colony where he died. In 1941, French authorities picked a timid teenager, Prince Norodom Sihanouk, as the country’s king so that he could easily be kept in check.

The Japanese, however, did not take anything for granted when it came to the French, with an extensive network to spy on them. “The Japanese were fully aware of the political leaning and sympathies of all French personnel,” Mr. Locard said.

As Germany was about to be defeated, the Japanese troops acted and, on March 9, 1945, arrested every French soldier and civilian in Indochina.

Apart from Kompong Cham province, where several French soldiers were killed, there was little bloodshed in Cambodia, largely because many of the French had quietly adapted to the Vichy government’s support of Nazi Germany.

“I believe that not only was he working for the Resistance [against Germany and Japan] but that he truly held responsibilities,” Mr. Locard said. “He probably was head of the resistance network in Phnom Penh.”

George Groslier’s involvement in the French Resistance—whose members in France comprised an underground army fighting the Germans—was confirmed by his grandson Antoine Groslier in an interview this week.

“This is one of the things that my father [George Groslier’s son Gilbert] and my grandmother [his wife Suzanne] told us,” Antoine Groslier said from his home in Denmark. “They did not give us that many details. But they actually talked about his radio: He was sending information” to other resistance members, he said.

George Groslier was a prominent figure in Cambodia. He not only built and managed the National Museum, but also set up the Ecole des Arts Cambodgiens —today’s Royal University of Fine Arts—to teach Cambodian traditional art forms.

An artist by training who was born in Cambodia in 1887, he did not really fit in the French colonial establishment, said Kent Davis, who published the first biography of George Groslier in 2010.

“With everything I know of Groslier…I cannot believe that this man sat idly by to see his birth country of Cambodia overrun by foreign forces” during the Japanese occupation, he said. Moreover, Groslier had fought during World War I, he said. Among other duties, he had been part of a unit flying in hot-air balloons over enemy lines to identify and map German positions.

George Groslier’s wife Suzanne and two sons were in France when the war was declared in Europe. So in 1945, it was only he and his daughter Nicole who were arrested in Cambodia along with all other French residents.

Right after his death, “Nicole was called in the [Japanese] commandant’s office to claim her father’s shoes, glasses and ashes,” Mr. Davis said.

During an interview four years ago, Nicole Rea did not want to talk about this episode of her life as it was still too painful for her. But last December, she agreed to let Mr. Davis copy the official documents about her father’s death, which she had kept in a corner of her home in the U.S. Two months later, she passed away at 96.

Mr. Davis plans to use the documents in his next book on George Groslier. They include the November 1945 report of the investigation conducted by the French authorities into his death, which states that Groslier was interrogated mainly because of radio transmitter equipment that he kept in his office on the art school grounds.

Although a Japanese medical examiner later reported that he had died of cardiac arrest, a French police inspector who signed his name only as Hermant noted that, based on witness accounts, the 58-year-old man had died during interrogation and not due to a heart condition.

In May 1947, a French military tribunal in Saigon concluded that he had died while being tortured. French authorities agreed to put in French archives that George Groslier had “Died for France.”

Suzanne, his wife, never returned to Cambodia, said Antoine Groslier. She never remarried, living with limited means surrounded by her husband’s artworks and objects crafted at the traditional art school he had launched, he said.

Their son Bernard Philippe Groslier was an archaeologist who worked on several restoration projects in Angkor park in the 1960s, leaving Siem Reap province in 1973 as Khmer Rouge forces were closing in on the region.

The end of World War II marked the beginning of the end for Indochina.

After Japan’s surrender, the French authorities hoped to reinstate their hold on the region, counting on their colonies to help rebuild France, which had suffered greatly during the war.

However, the independence movements that the Vichy government had tried to crush in wartime kept on building momentum and, through violent upheaval in Vietnam and peaceful means in Cambodia, led to the dissolution of Indochina in 1954.