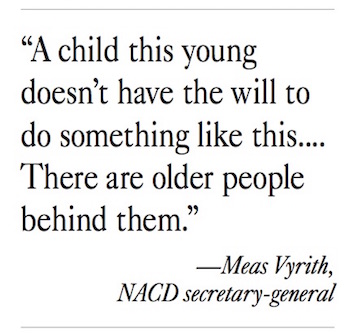 The arrest of an 8-year-old boy found with 35 small bags of crystal methamphetamine in Phnom Penh shows that drug traffickers are using children as dealers to avoid prosecution, law enforcement officials and an NGO worker said on Wednesday.

“A child this young doesn’t have the will to do something like this,” General Vyrith said. “There are older people behind them.”

While traffickers might think police would not arrest child dealers, authorities detain them for questioning in order to track down the adults who compel them to sell drugs, he said.

No one else had been arrested in relation to the case as of on Wednesday evening, said In Song, administration bureau chief at the Interior Ministry’s anti-drug department.

The drugs in the boy’s possession were verified to be crystal meth, he said.

Mr. Song said the case was not the first in which a minor was arrested over a drug-related crime since the government began an anti-drug crackdown on January 1, but he could not remember how many children had been detained.

Dealers know that children under the age of criminal responsibility, which is 14, will not be prosecuted if they are arrested, Mr. Song said.

“Drug traffickers, they know the law,” he said. “That’s why they always use children.”

Sorn Sophal, director of the municipal social affairs department, said the boy was sent to his department on Wednesday morning and would be taken to a state-run rehabilitation center, where he would be drug-tested.

Pin Sokhom, drug program manager at NGO Mith Samlanh, which supports poor and homeless children, said it was uncommon for youngsters to use methamphetamine, but traffickers were using them to deal drugs.

“When law enforcement is very strict, they try to use the young kids,” he said.