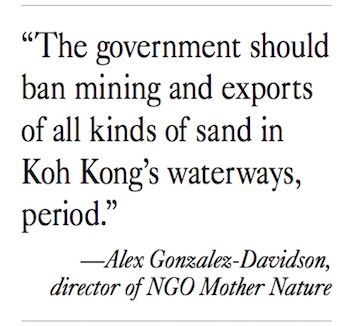 The Mines and Energy Ministry has issued a directive banning sand exports from Koh Kong province, months after it suspended sand exports and new dredging licenses over export record discrepancies.

The ministry will “permanently cease the exports of all kinds of construction sand and mud sand in Koh Kong province to foreign countries,” according to the statement issued Monday by Minister Suy Sem. It does not mention silica sand, which it previously said had been exempted from the suspension.

The first-of-its-kind sand export ban still permits companies to dredge sand from specific rivers and parts of the coast, including the Sre Ambel and Tatai rivers, but prevents that material from being sold to other nations.

Ministry spokesmen could not be reached for comment on Wednesday.

Local authorities and communities should be consulted about all dredging projects, and the operations should not pollute rivers, change the shapes of rivers or block water flow, the statement says. Exiled Mother Nature director Alex Gonzalez-Davidson hailed the ban but doubted it would last long. He said he worries companies will sidestep the law by obtaining licenses to extract a small amount of sand and instead smuggle millions of tons out of the region, as companies had in the past.

“Nothing at all indicates that they won’t do just that all over again this time, under the facade that the sand is for domestic use,” Mr. Gonzalez-Davidson said. “The government should ban mining and exports of all kinds of sand in Koh Kong’s waterways, period.”

The ministry suspended sand exports and new dredging licenses in November after months of controversy related to enormous discrepancies in records of sand exports to Singapore. Singapore, which uses sand to reclaim land and expand its territory, reported importing more than 6.5 million tons of Cambodian sand last year in data it provided to the U.N. Commodity Trade Statistics Database—down from more than 10.9 million tons the year before.

But Cambodia’s customs department figures show just 14,800 tons of Singapore-bound sand leaving the country last year, continuing a trend over the past three years of the department counting less than 1 percent of the sand recorded by Singapore.