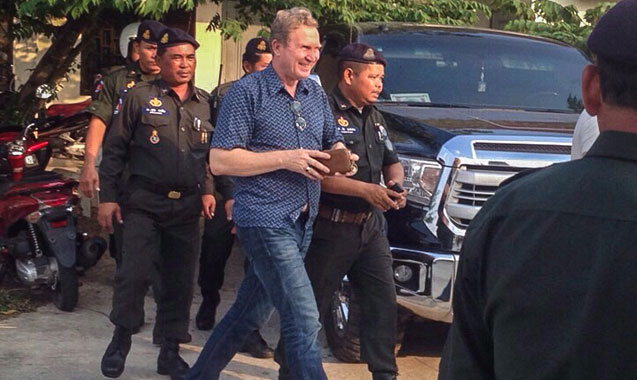 Russian businessman Nikolai Doroshenko was imprisoned Wednesday evening after being arrested at his family’s Snake House restaurant in Sihanoukville for failing to appear in court to be questioned over fraud charges related to a dispute with his rival, fugitive developer Sergei Polonsky.

Mr. Doroshenko, 54—a longtime Sihanoukville resident whom Mr. Polonsky accuses of using fake documents and forged signatures to deprive him of $10 million—was arrested Wednesday afternoon by a contingent of military police before being sent to the Preah Sihanouk Provincial Court and then the provincial prison, officials said.

“We arrested him based on the court’s warrant,” he said.

Photos taken after the arrest show Mr. Doroshenko being driven away from the restaurant in a pick-up truck escorted by a convoy of military police cars.

“The court decided to place him in pretrial detention,” he said, declining to comment further.

Judge Kheang could not be reached. Provincial prosecutor Chat Soreaksmey and court director Mong Monychakrya declined to comment on the case.

“Please don’t publish anything about this case,” Judge Monychakrya said.

According to a copy of the arrest warrant, which is signed by Judge Kheang, Mr. Doroshenko has been charged with signature forgery, the use of counterfeit documents and breach of trust. The warrant says he failed to heed two separate court summonses last month, the first on February 10 and the second on February 26.

“The warrant has sufficient power to order the director of the prison to receive and detain the accused, an objective of this arrest and detention warrant,” it reads.

Mr. Doroshenko could not be reached Wednesday. His son Ostap, 36, a captain in the provincial immigration police, said he was too busy to talk. Both father and son hold Cambodian citizenship.

Benson Samay, a lawyer for Mr. Polonsky—a former billionaire who is wanted in Moscow on multimillion-dollar embezzlement charges—said Mr. Doroshenko had used his client’s signature on the counterfeit documents in order to steal $10 million from their joint Sea Snake Investment Group.

“We demand the $10 million that Doroshenko took…and we also demand $2 million in compensation,” he said.

According to Mr. Samay, Mr. Polonsky has now requested that the provincial court detain Mr. Doroshenko over no less than 14 offenses, ranging from lese-majeste to grand theft auto and trespassing to distribution of photos showing Mr. Polonsky nude and using drugs.

The Russian heavyweights have also been feuding outside the court, with Mr. Doroshenko accusing Mr. Polonsky of being behind an attack on his son in November and his son claiming that the wanted oligarch was responsible for an explosion that ripped apart the engine bay of a Range Rover parked outside their family home earlier this month.

Mr. Polonsky has denied involvement in both incidents.

Speaking by telephone from his private island off the coast of Sihanoukville last night, Mr. Polonsky said he had been waiting years for the provincial court to finally take action against Mr. Doroshenko.

“It’s a big step,” he said, adding that he was “100 percent” confident that authorities would rule in his favor in every case he had brought against his rival.

“Now they have a chance to interrogate him,” he said. “I’m very happy.”