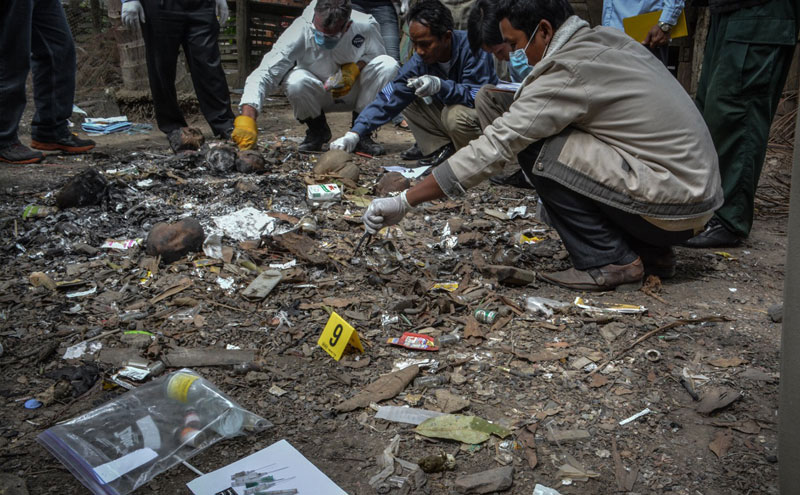 The unlicensed doctor suspected of spreading HIV to more than 100 people in Battambang province’s Roka commune has admitted to routinely reusing syringes and was sent to provincial court for questioning Sunday, according to police.

Preliminary testing for HIV be­gan on December 8 at the Roka commune health center in Sangke district after a 74-year-old man, along with his granddaughter and son-in-law, tested positive for the virus in late November.

The elderly man blamed Yem Chrin, a local unlicensed doctor from whom he had received treatment, for infecting him with HIV and advised his other patients to get tested, too.

Of the nearly 110 villagers who have now tested positive at the commune health center, 90 had their cases confirmed at the Pasteur Institute in Phnom Penh as of Friday, according to the institute’s director, Didier Fontenille.

Dr. Fontenille could not be reached Sunday.

Deputy provincial penal police chief Seng Luch, who has taken part in the questioning of Mr. Chrin since police detained him on Wednesday, said Sunday that Mr. Chrin admitted to being careless in his use of syringes.

“According to his answers, he used the same syringes,” he said. “For every two or three people, he used one syringe.”

Mr. Luch said a single syringe used by Mr. Chrin might have also been used for multiple purposes, including the extraction of blood and injection of medicine.

“[Mr. Chrin] said he changed the needles, but sometimes he did not change the syringes,” he said, adding that “two or three” blood tests have been carried out on Mr. Chrin, who tested negative for HIV.

“We accused him of transmitting the [HIV] virus to the villagers in Roka commune,” Mr. Luch said. “He was sent to the court [Sunday] as a normal suspect and after being questioned he will be put in jail.”

Mr. Luy said he was “busy” and could not discuss the case, but provincial police chief Sar Thet said the court had not yet finished questioning Mr. Chrin.

“He was sent back to the provincial police station and will be sent to the court tomorrow to continue being questioned,” Mr. Thet said.

By Beng Sor, chief of the Roka commune health center, said Sunday that young children, elderly villagers and two monks are among the more than 100 people who have so far tested positive at his clinic.

Masami Fujita, the World Health Organization’s HIV team leader in Cambodia, who is aiding the government in its investigation into the cause of the HIV outbreak, said Sunday that it is entirely possible to spread the virus via contaminated medical tools.

“Scientifically, it’s possible for the virus to survive outside the body for days or even weeks if all the right conditions are met,” Dr. Fujita said.

“Contaminated medical tools could be one of the causes in this case,” he said, adding that HIV is far more likely to survive outside the body if it is contained, as it would be in a syringe.