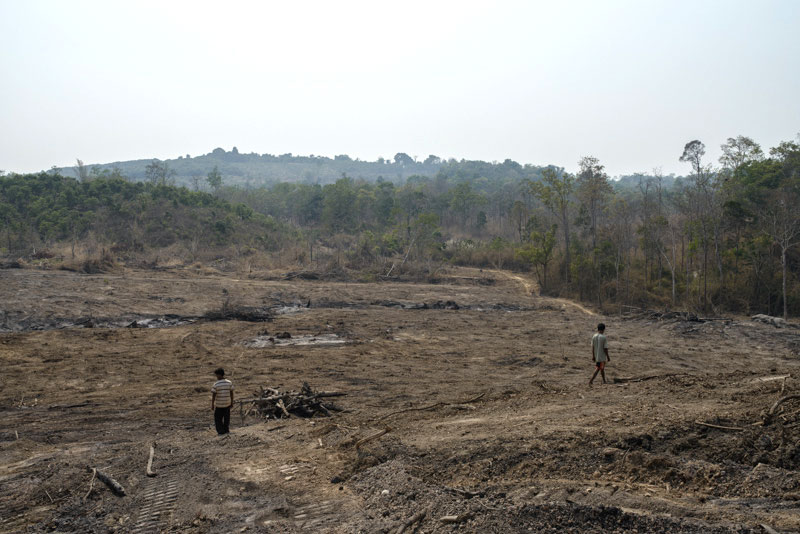 In the report, Rubber Barons: How Vietnamese companies and international financiers are driving a land grabbing crisis in Cambodia and Laos, Global Witness, which is based in the U.K., links Deutsche Bank and the IFC to two Vietnamese firms backing a long list of “shell companies” that, according to the organization, are breaking forestry laws at the expense of eastern Cambodia’s remaining forests and the villages that depend on them.

“We’ve known for some time that corrupt politicians in Cambodia and Laos are orchestrating the land-grabbing crisis that is doing so much damage in the region. This report completes the picture by exposing the pivotal role of Vietnam’s rubber barons and their financiers, Deutsche Bank and the IFC,” Megan MacInnes, who runs Global Witness’ land team, said in a statement.

“Both companies are having severe impacts on the human rights of ordinary Lao and Cambodian citizens,” she said.

Drawing on satellite images, government and corporate documents, field visits and exchanges with the firms involved, Global Witness deduced that the IFC currently has a $14.95 million stake in a Viet­namese-based investment fund investing in Hoang Anh Gia Lai (HAGL), a Vietnamese rubber firm listed on the London Stock Ex­change. The organization also says that Deutsche Bank holds another $4.5 million worth of HAGL shares, along with $3.3 million in shares in Dong Phu, a member of the state-owned Viet-nam Rubber Group (VRG).

Global Witness called on Deutsche Bank and the IFC to divest from the Vietnamese firms if they fail to comply with local laws, and for Cam­bodia and Laos to cancel all the rubber plantation concessions operated by HAGL and VRG subsidiary companies, investigate their practices and prosecute illicit activity.

“HAGL and VRG’s ultimate ownership of these companies lies be­hind an intricate web of shell companies,” the Global Witness report says. “This allows them to disguise the fact that they have massively exceeded Cambodia’s legal limit on land holdings,” which sets the ceiling for any one person at 10,000 hectares.

Satellite images Global Witness has of three of those plantations from 2011 and earlier this year show what it calls “significant” clearing of evergreen and semi-evergreen forest inside economic land concessions handed out to the firms.

But Global Witness says the government’s contract with one of the firms, CRD, requires it to protect forested land inside its concession. Citing the Cambodian government’s own database on land concessions, Global Witness claims that another HAGL subsidiary, Heng Brother, signed its contract before the area was converted from state-public to state-private land as the law demands.

With all three plantations, Global Witness says it could find no evidence that the subsidiaries completed environmental impact assessments and local villagers said they were never consulted in advance.

Global Witness also questions the logging inside the concessions as Cambodian law protects state forests from logging unless the state says they have lost their “public interest” and deems them degraded beyond repair.

Global Witness also says the livelihoods local villagers made from those forests—especially the resin trees—and its satellite images prove that the forests were not degraded at the time they were logged.

“There’s no way you can say they were degraded forest on the date that the contracts were signed,” Ms. MacInnes said.

“The negative impact of VRG and HAGL’s activities is hard to overstate,” the report says. “Often, the first people know about either company being given their land is when the bulldozers arrive. Fam­ilies affected are impoverished, face food and water shortages and get little or no compensation.”

The six firms, it said, “had all taken agricultural and forested land from the local people without prior consultation.”

“As a result, three of these villages [including those near Dong Phu] are now suffering significant food shortages and loss of income.”

The report says some farmers took modest payouts and sent their children to work on the plantation, but only because they felt they had no other choice.

Global Witness says it spoke with villagers near another plantation belonging to VRG member Tan Bien, who said the company had violently evicted them in 2009 and was using chemicals that had polluted local water sources.

More satellite images of Dong Phu and its neighboring VRG plantations from 2008 and early this year also show vast tracks of forest disappearing not just inside the plantation boundaries, but some 3,000 hectares outside as well.

“Global Witness could not verify that either company [Dong Phu or Dong Nai], or groups under their control, were responsible for this clearing outside their concessions boundaries,” the report says. “Nevertheless, as indicated [in the satellite images], the area cleared appears to directly extend out from both companies’ concessions. Moreover, the absence of other access roads into what used to be an intact forest means that the timber could have only been removed from the area through the concessions.”

A man who answered a mobile phone listed for VRG’s office in Phnom Penh declined to comment on the Global Witness report.

Representatives for HAGL and its subsidiaries could not be reached.

Global Witness met with and contacted both HAGL and VRG about its allegations this year and last, receiving mostly denials, no comments and no replies in return.

The report says that HAGL denied holding some 28,000 hectares in Cambodia that Global Witness claims it does. HAGL also reportedly said it had only cleared “degraded” forest and did not know of any land disputes with local people in Cambodia.

“Certain of our existing projects are being developed without necessary government approvals, permits or licenses and development and operation of certain projects are not fully in compliance with applicable laws and regulations,” states the circular, which is included in the Global Witness report.

“[W]e have been advised…with respect to legal matters in Cam­bodia, Laos and Thailand, that the relevant government authorities may still have the power to impose administrative sanctions upon us based on certain of our prior non-compliances,” the circular states.

Global Witness says HAGL first admitted to not fully understanding local laws when asked about the contents of the confidential circular, but later claimed that the official English translation of the circular was inaccurate and did not elaborate further.

As for Deutsche Bank and the IFC, Global Witness accuses both institutions of failing to uphold their own ethical standards.

Hannfried von Hindenburg, the IFC’s regional spokesman, said the IFC’s investment in HAGL is through Vietnam Enterprise Investment Limited (VEIL), an investment fund that is owned by Dragon Capital, which has offices in Vietnam, the U.K., Bangkok and Hong Kong.

“IFC will carefully study the findings of the Global Witness re-search, and taking this research into consideration is part of our ongoing monitoring of our investments in Dragon Capital and VEIL,” Mr. von Hindenburg said.

Deutsche Bank, the report says, told Global Witness that it had read brokers’ reports, met managers and made site visits, but only in Vietnam.

Global Witness called on Deutsche Bank and the IFC to tell the Viet­namese firms to bring their plantations in Cambodia and Laos in line with local laws in the next six months or divest immediately.

Hean Vanhorn, deputy director-general of agriculture at the Ministry of Agriculture, which oversees most rubber plantations, said Cambodia had already canceled 20 to 30 land concessions recently for various violations but did not know which, if any, of them might have been owned by the Vietnamese firms.

Mr. Vanhorn said the government rigorously applied its “tiger skin” policy to land concessions by cutting out any communal forests vital to locals.

“We have to keep communal forests to protect the ethnic minorities, but if a company breaks the law the villagers can complain against them,” he said. Asked if some firms were getting more than the 10,000 hectares as stipulated by law, he said, “I am not sure.”