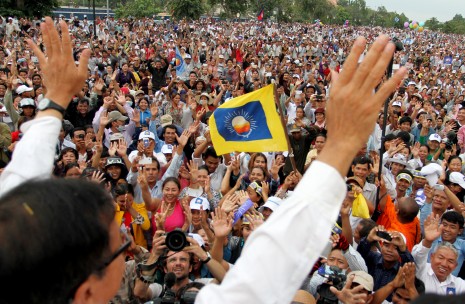 When opposition leader Sam Rainsy last touched down at Phnom Penh International Airport, he was greeted by some 100,000 supporters in what was the largest opposition rally in Cambodia’s 20 years of democracy.

When he returns on Friday from the U.S., where he has been at­tending his daughter’s wedding, he will find himself at the center of a political standoff between the ruling CPP and opposition CNRP, the result of which will determine his party’s role inside the National Assembly over the next five years.

It is also likely to determine the next step in the career of Mr. Rainsy, whose hopes of becoming a lawmaker have been dashed due to previous criminal convictions leveled against him that made his candidacy in the July 28 election impossible.

At 64, Mr. Rainsy, as the president of the CNRP, has more support than at any point in his more than 18 years as an opposition politician. Yet for the first time since 1998, he is not an elected member of Parliament.

Despite eleventh-hour efforts to be listed as a National Assembly candidate after his return to the country on July 19, just nine days before the election, the National Election Committee (NEC) decided that it was too late for Mr. Rainsy to run.

On election day—with his name still removed from voter lists for criminal convictions, which have since been pardoned—Mr. Rainsy toured polling stations and drew crowds of supporters at markets in Phnom Penh.

But how much leverage Mr. Rainsy has once the next mandate of the government begins is still up in the air.

“There is a possible technical and legal arrangement for me to become a National Assembly member in the next few months,” Mr. Rainsy said in an email Wednesday, adding that it would take extensive reform measures on the part of the CPP for the CNRP to even consider validating a CPP-led government.

“The CNRP would participate in the formation of a new National Assembly allowing the formation of another CPP-led government only if there were serious and credible guarantees that crucial reforms would be immediately implemented concerning the NEC, the election system, the Judiciary, the Parlia­ment, the Civil Administration, the Armed Forces, the broadcast media, the Human Rights Committee, the Anti-Corruption Unit, etc.,” Mr. Rainsy said.

Although Mr. Rainsy is holding out some hope that he will be able to take up one of the CNRP’s 55 seats in the National Assembly, CPP lawmaker Cheam Yeap on Wednesday said that Mr. Rainsy has “no chance” of becoming a member of Parliament in the next five years.

“It is way too late for him. But he has a chance if there is sympathy from the Prime Minister of the winning party, the CPP, for him to get a job in government,” Mr. Yeap added.

Still, an official at the NEC, who spoke on the condition of anonymity because of the sensitive nature of the matter, said that Mr. Rainsy would in fact be eligible to sit in Parliament as early as January 2014.

“It is too late for him [to be a parliamentarian this year] since it is past the deadline for the registration for election and the party’s candidate list. But there is a technical way to [get him into Parliament],” the NEC official said.

“He can wait until the time of the new registration to arrive. This year, the voters can register for elections in October. After registration, his party can seek for validity of new party candidate lists [as soon as December 31],” the official said.

In order to get Mr. Rainsy onto the new list, the CNRP would have to have one of its current elected National Assembly members resign along with all of its reserve candidates in a given constituency and then Mr. Rainsy could take the empty spot.

Regardless of his role over the next five years, independent political analyst Lao Mong Hay said that Mr. Rainsy should leverage his popularity while simultaneously settling into a more “statesmanlike” role as the CNRP’s president.

“I would encourage him to capitalize on [his popularity]. Keep cool, keep calm, restrain his style, become more statesman-like. He is a bit rash, you know. That rashness has landed him in some trouble,” he said, referring to comments the CNRP leader made on Facebook appealing to the armed forces to “stand up” with his party’s supporters to change the government.