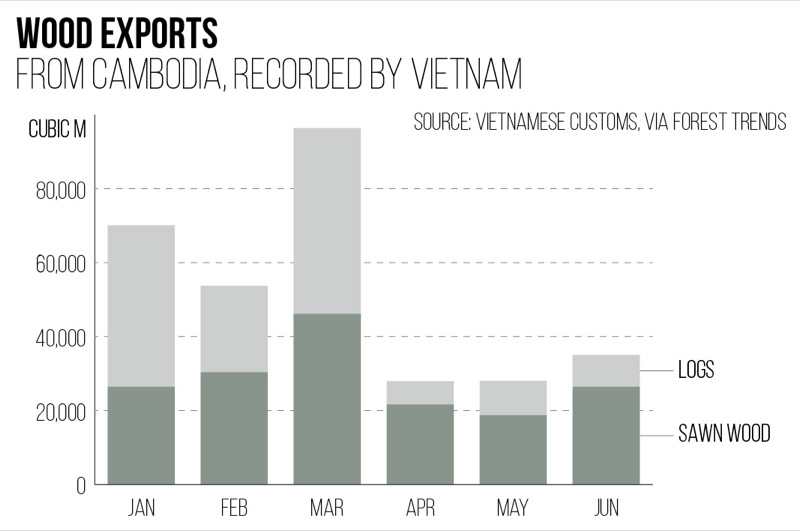 Vietnam imported $142 million worth of timber from Cambodia during the first half of the year, according to the latest customs data from Hanoi, adding to the mounting evidence that Cambodia’s nominal timber export ban is being widely ignored.

The government imposed the ban in January last year in a tacit admission that much of the timber leaving Cambodia for Vietnam was being logged and shipped out illegally.

Despite a dramatic drop in exports during the first few months of the ban, the cross-border traffic soon started picking up again, based on regular Vietnamese customs data obtained and shared by the U.S. NGO Forest Trends.

The latest data shows that most of the $142 million worth of timber that left Cambodia for Vietnam from January to June was sawn wood, but some of it was logs. That was about 65 percent more timber by value than made the same trip during the first half of last year.

The data also shows that the timber that left Cambodia for Vietnam this year added up to 313,000 cubic meters, 114 percent more than during the first half of last year.

In May, the U.K. NGO released the results of a monthslong undercover investigation that found Vietnamese companies illegally logged protected forests in Ratanakkiri province on an industrial scale and hauled hundreds of thousands of cubic meters of timber across the border. The Vietnamese loggers and traders told the investigators they paid millions of dollars in bribes to Cambodian officials to let them do it.

In January, most of the timber left Cambodia from Ratanakkiri, where EIA found the massive logging operation. Since then, the traffic has migrated south, with most of the timber in June reaching Vietnam from the provinces of Tbong Khmum and Kratie. In December, Cambodia Daily reporters found a military border unit in the area buying luxury grade logs from locals and selling it to visitors from Vietnam.

In Mondolkiri province, which also borders Vietnam, 11 top officials have been caught up in a government investigation into allegations that local authorities were taking bribes to let Vietnamese loggers smuggle timber through official checkpoints. Two border officers have been suspended.

Xuan Phuc, a regional trade and finance analyst for Forest Trends, however, said the persistence of the cross-border timber trafficking exposed a lack of political will to stop it.

“I think there’s [a] lack of strong political commitment from both sides for addressing the problem. I say this because the importing trend does not provide us any confidence that [the] scale of the trade has been and will be reducing,” he said.

Mr. Phuc said the shift in the crossings may have to do with varying levels of state control along the border and with the personal connections individual traffickers make with specific enforcement agencies guarding them.

“Effective mechanisms for addressing the problem require strong political commitment from both central and local governments, and consistency between the central and local level,” he said. “It also requires [a] better check and balance system in place to make sure shifts of the importing/exporting…by the traders cannot be undertaken.”

Since the EIA released its report in May, the Environment Ministry says it has launched its own investigation into the findings. The E.U., which is in the midst of setting up a clean timber trading scheme with Hanoi, says authorities

in Vietnam have done the same.

On Tuesday, Environment Minister Say Sam Al said the investigation was ongoing, but he declined to elaborate on its substance.

Mr. Sam Al questioned EIA’s motives, however, because it decided not to collaborate with the government in its investigation. He said the report was not comprehensive because EIA failed to compare its estimates of illegal timber shipments with the government’s own export figures before publishing.

When asked why EIA would collaborate with the government when it suspected collusion with the loggers it was investigating, or why it would compare illegal timber shipments with a government that has banned timber exports, the minister insisted that

the NGO should have cooperated.

As for the latest customs data from Vietnam, Mr. Sam Al said there was probably some “leakage” across the border, but disputed the scale of the problem as suggested by the numbers from Hanoi.

The minister had not seen the latest numbers and said he would study any data “made available to us” but remained skeptical. Asked why he doubted Vietnam’s customs data, he argued that exports of wood furniture were still legal and that the data might include some of the roughly 70,000 cubic meters of illegally-logged timber authorities seized early last year, which would therefore be legal as well.

The customs data shared by Forest Trends includes only logs and sawn wood, however, not furniture. As for the 70,000 cubic meters—which was soon sold off—the government made clear that it was not to be exported, although some conservationists suspect that much of it may have crossed the border regardless.

The 70,000 cubic meters were seized as part of a sweeping crackdown on illegal timber stocks across eastern Cambodia orchestrated by the National Military Police, which has been spearheading an inter-agency operation against illicit logging and other natural resource crimes ever since.

Asked about the latest timber import data from Vietnam on Tuesday, Eng Hy, spokesman for the National Military Police, told a reporter to ask Vietnam and hung up.