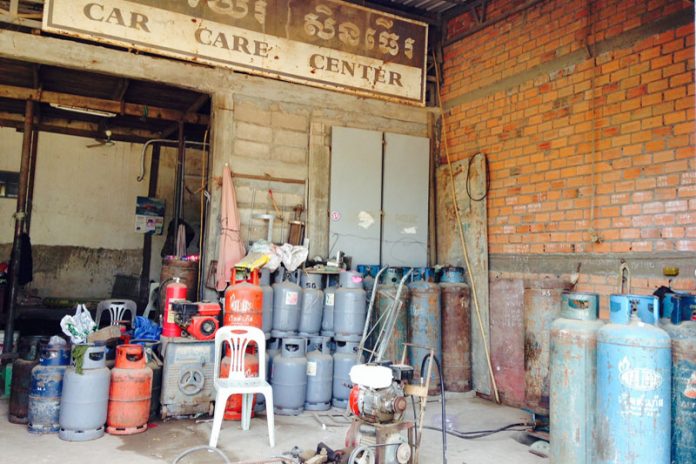 POIPET CITY – Before the Thai junta seized power in late May, Pich, a 45-year-old teacher from Banteay Meanchey, used to join a queue of about 400 cars every morning lined up at the Poipet International Checkpoint to enter Thailand.

Pich was ostensibly driving his wife to work at Rong Kluea Market in the border town of Aranyaprathet, and had a special pass on his car indicating that it belonged to a vendor.

But after dropping her off, he would head straight to a fuel station and fill a specially fitted tank in his trunk with 60 kg of liquefied petroleum gas (LPG), which is heavily subsidized in Thailand and can be sold in Cambodia for a tidy profit. He made the back-and-forth trip three or four times per day, with or without his wife in the car, earning up to $60 each day.

When the Thai junta imposed stricter border and immigration controls shortly after coming to power, it also came down hard on LPG smuggling, quashing what has been a lucrative business opportunity for those living along the border who could finagle an entry pass.

“Transporting gas can cut poverty, because we earn 400 to 500 baht [about $12.35 to $15.40] per run,” said Pich, who asked to be identified only by his first name because he was involved in an illegal activity.

“Since they banned us, it affects our living,” he said.

Walk down the street here in Poipet City and nearly everyone, from motodops to coffee vendors, can rattle off the price of a kilogram of gas on either side of the border.

And the difference in price is significant.

“There is usually a long line of cars waiting to go to Thailand to buy gas,” said Pich Sithor, the deputy chief of immigration police in Poipet City. “Since the Thai side banned our local cars from entering to buy gas for the past month, it automatically affects local businesses and the [traders’] earnings day by day.”

In late May, shortly after the military junta took power, Banteay Meanchey governor Kousoum Saroeuth said around 400 vehicles per day were crossing the border to buy gas and sell it in Cambodia.

“Most people with a car in Poipet are smuggling gas from Thailand,” said Bath Chiv, a driver who frequently makes the trip between Poipet City and Phnom Penh. He said the cheaper fuel helps him earn a living.

“Now there’s a problem, because Poipet gas has become more expensive,” Mr. Chiv said. “Most city people crowd to buy the gas from Poipet to then sell to other areas, but now the people learned the situation on the border and increased the price on their own.”

According to Pich, prices are up from around 29 baht per kilogram to 36 baht per kilogram over the past month, an increase of about $0.22. Kim Horng, a gas seller near the Poipet International Checkpoint, said the price had increased to anywhere between 32 and 36 baht, or about $1 to $1.10.

Saroth, another former smuggler whose wife is also a vendor in Thailand, said he was being deterred by a new 50,000 baht (about $1,543) fine imposed by the military junta on any cars caught taking LPG from Thailand to Cambodia. In better times, he brought a 50-kg tank of gas into Cambodia every day for a $9.50 return.

“The Thai military is very strict,” he said.

Since cars, even those with Rong Kluea vending permits, were banned from entering Thailand two days after the May 22 coup, Cambodian officials have been negotiating with the Thai junta to try and allow them back in, but to little effect.

At a press conference last week with officials from the Thai and Cambodian governments, Banteay Meanchey deputy governor Oum Reatrey said the cross-border gas arbitrage was a sticking point between Cambodian and Thai officials.

“Previously, before the junta government, there were [many] coming across the border to buy gas for selling in Cambodia as their business. I also asked them to return normally,” Mr. Reatrey said.

The governor of Thailand’s Sa Kaeo province, Phakarathorn Tianchai, when asked about the problem, said the ban was unlikely to be lifted anytime soon. He pointed out that the gas smugglers had never been operating legally.

“I recognize and accept about the Rong Kluea sellers who need the gas for their cars, but some sellers do not do like this. They get gas from Thailand and go sell it in Cambodia. Right now, we are strengthening the gas market, so please keep your patience with the new government,” he said.

But some Cambodians are finding patience difficult. Soum Chankea, the Banteay Meanchey provincial coordinator for rights group Adhoc, said he is hearing an increasing number of complaints about high LPG prices in border regions.

“A small car like this uses gas to get profit. If you use gasoline, no profit,” explained Prum Sruoch, 49, who was loading up an LPG-fueled Toyota Camry with mangos and rambutans to sell in Serei Saophoan City. “I hope [the Thai government] will reform soon.”

Pich, the teacher and erstwhile smuggler, said he was struggling to make a living next to Thailand’s new regime.

“I request the Cambodian and Thai governments to allow us to do the same business because it can help our families have better living conditions,” he said.

“A teacher’s salary is very small.”