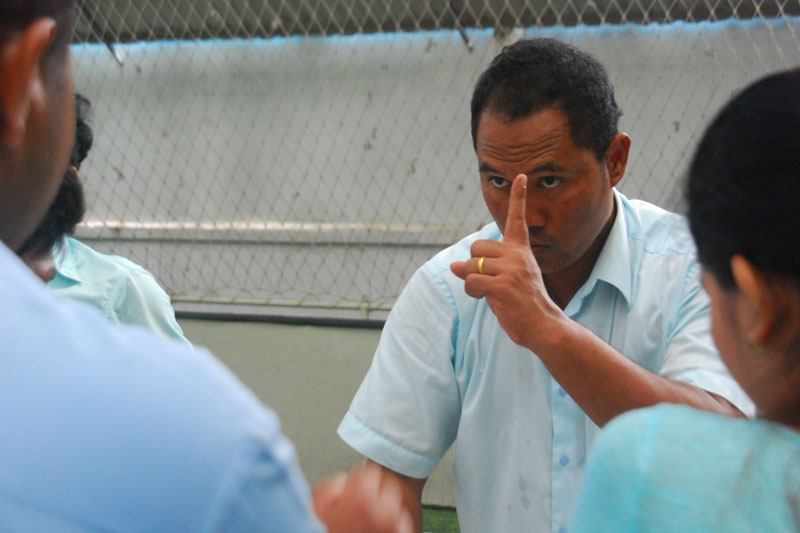 By the age of 17, Chan Chonreasmey was yet to have a conversation with another person—not with her mother, not with her father, and certainly not with any other children.

Like many other deaf Cambodians, Ms. Chonreasmey was completely cut off from a society that provides very little support for those who can’t hear. Unable to attend public school, she spent every day inside her family’s home, doing household chores or playing, alone.

“When I lived in Kandal province, I was only by myself. I never communicated with other people,” the 19-year-old explained using Khmer sign language.

Two years ago, Ms. Chonreasmey was enrolled in the Maryknoll Deaf Development Program’s (DDP) education course, where she began learning how to communicate using signs, to read and write basic Khmer, and to gain an understanding of simple mathematics.

“My life is better than before, because now I have friends,” she said. “When I finish my education, I think I might study to be a makeup artist.”

It was not until 1997, when a Finnish aid worker gathered a group of deaf Cambodians together and encouraged them to communicate with each other, that Khmer sign language first began to take shape.

Under the guidance of Charles Dittmeier, a Catholic priest who arrived in Phnom Penh 14 years ago to work at DDP, hundreds of young people like Ms. Chonreasmey have freed themselves from living only inside their own minds.

After completing the two-year education course, which is open to those aged 16 and over, students can go on to a one-year vocational training program where they can learn skills from sewing to repairing motorbikes.

They can also get involved in a wide range of activities, usually for the first time, such as playing football or chess against both deaf and hearing opponents.

But scars from their past remain. When talking about their homes, students use the sign for prison—three fingers of one hand held spaced out, to represent bars, over an upright thumb to denote a person.

“It gives you a clue about their lives at home. It’s kind of like being trapped inside solitary confinement,” Mr. Dittmeier said.

“Part of it is that most parents of a deaf child don’t understand what deafness is. They think they have a [mental] disability.

“Many times when we go out into a village and ask ‘Are there any deaf people here?’ they say, ‘No, but we have this one crazy girl who makes strange sounds’ and it turns out that she’s deaf.”

DDP, which runs projects in Phnom Penh and the provinces of Kampot and Kompong Chhnang, is one of only two organizations providing formalized education to the deaf.

The other is the children’s charity Krousar Thmey, which means “new family.”

But the two organizations, which are this week celebrating International Week of the Deaf, have been teaching their students two different kinds of sign language for nearly two decades.

While DDP uses Khmer sign language, Krousar Thmey decided to base its curriculum on American Sign Language when it began offering classes to deaf children in 1997.

“When you are starting a school you need a language now, you can’t wait 10, 15, 20 years for it to develop, so they looked around and decided to adopt American signs,” Mr. Dittmeier said of Krousar Thmey.

Hang Kimchhorn, the coordinator of Krousar Thmey’s Deaf Education Program, said the charity had always been mostly concerned with giving their students, who can enroll in first grade at any age between four and 14, a chance to learn.

“Our purpose, our goal, is to provide education to the deaf,” he said. “The most important thing is that they can sign and read and write Khmer.”

Although many in the deaf community realized long ago that the two-language approach was problematic, past attempts to unify them have been unsuccessful.

A breakthrough came in late 2013 when a group, largely made up of deaf Cambodians, came together to figure out how best to create a common language.

Mr. Kimchhorn said the Sign Language Unification Committee, which received funding from the National Technical Institute for the Deaf in the U.S., are tackling the job by revising Krousar Thmey’s curriculum one grade at a time.

For each sign, a series of illustrations must be drawn to demonstrate a gesture’s movements before the syllabus is sent to the Ministry of Education for approval, as Krousar Thmey follows the public school curriculum.

“The progress is a little bit slow, because we can’t just create signs and then finish…it takes time,” Mr. Kimchhorn said, adding that the committee is now discussing signs for Grade 3.

Despite their efforts, the common language is likely to take many years to reach the majority of the country’s deaf.

According to DDP, there are an estimated 51,000 completely deaf people across the country, plus a further half a million who are hard of hearing.

Among them is 22-year-old Heang Dalen, who could only express herself using improvised gestures when she started at Krousar Thmey, whose older students spend half of each day in public schooling.

“When I attended the public school, at first I faced a lot of difficulties with the other students,” she said.

“Some of them laughed at me, but now my classmates can understand some of my signs and even want to learn sign language.”

Now, Ms. Dalen hopes to become one of the few Krousar Thmey graduates to attend university when she completes grade 12 next year.

And with a unique insight into deafness and the difficulties presented by Cambodia’s dual sign language system—two of her three older sisters are also deaf and recently finished training at DDP—Ms. Dalen also wants to help others escape the problems she faced.

“I want to be a teacher of deaf children, I want to work here,” at Krousar Thmey, she said.