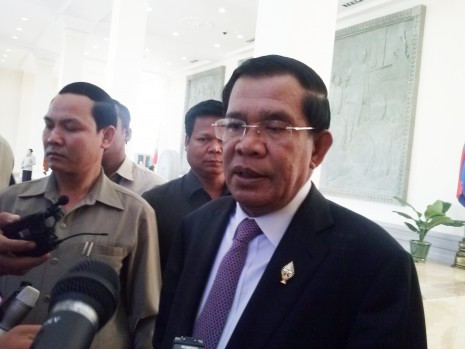 CPP lawmakers have lined up behind their prime minister, Hun Sen, insisting in recent statements that a new election the opposition is demanding will never happen, and would not even be legally possible.

Experts familiar with the law, however, said legislation does allow for fresh elections, and the only thing the government needs is the political will to see it happen.

At an opposition rally in Siem Reap City two weeks ago, CNRP President Sam Rainsy invoked the example of Thailand, where the government has called snap elections for February to quell growing opposition and street protests there. In the past week, thousands of opposition supporters have taken to the streets of Phnom Penh on a daily basis calling for Mr. Hun Sen to resign.

Facing mounting protests, Mr. Hun Sen on Friday responded directly to the calls for his resignation, saying that an early election would never happen and that it was not legal under the Constitution.

Since then, the CPP-dominated National Assembly and CPP members of the Senate have issued a petition and a statement, respectively, endorsing Mr. Hun Sen’s rejections of calls for a new election, and his resignation.

“We, the parliamentarians of the Cambodian People’s Party, completely support the comments Mr. Hun Sen made on Friday, quoted as saying no re-election and no to stepping down,” 54 of the CPP’s 68 National Assembly members said in a statement released Monday.

Cheam Yeap, a CPP Assembly member and spokesman for the party, said the other 14 CPP lawmakers had not signed the petition only because they were in the provinces or abroad.

“There is no reason to have midterm elections…and there are no laws authorizing a re-election,” Mr. Yeap said.

“The prime minister cannot be voted out unless he is found to have committed critical wrongdoing…for example, if he is arrested and convicted of corruption by a court.”

In a statement, CPP members of the Senate said the opposition’s calls for new elections and for Mr. Hun Sen to resign “are causing the destruction of peace, stability, security, social order and development, and can cause the internal split of the nation.”

The CNRP’s 11 senators, who like their colleagues in the Assembly have been boycotting the new parliament, were quick to say they had nothing to do with the Senate statement.

Like the CPP’s spokesman Mr. Yeap, Tep Nytha, secretary-general of the National Election Committee, which is widely seen as beholden to the CPP, said the law made no room for midterm elections, but that they could take place if the laws were changed.

“There are no laws in place, including the national election law and the Constitution, authorizing a re-election,” he said. “But, if there were a political solution to reform or amend the law, that would be another thing,” he said.

On Friday, Mr. Hun Sen invoked the Constitution’s Article 78 in defense of his inability to call an early election.

Article 78 states the National Assembly cannot be dissolved before the end of its five-year mandate—unless the government loses two votes of confidence in the space of 12 months. At that point the King, with a proposal from the prime minister and approval from the Assembly president, “shall” dissolve the Assembly, with new elections to take place within 60 days.

But although the prime minister can’t call for snap elections on his own, legal and election experts Monday dismissed the notion that midterm elections were legally not allowed.

“If the government, the CPP, agrees to have snap elections, no problem,” said Koul Panha, executive director of the independent Committee for Free and Fair Elections in Cambodia (Comfrel).

“The question for the CPP is whether they want credible elections or not; it’s the political will,” he said. “He [Mr. Hun Sen] tries to say the law does not allow, but it is not like that; it just depends on the political will.”

Hang Puthea, who heads the Neutral and Impartial Committee for Free Elections in Cambodia (Nicfec), agreed.

“The Assembly is the representative of the people, so if they want a re-election they can do [it].”

And as unlikely as it seemed, Mr. Hang said there was another legal avenue as well.

“If the [Constitutional] Council [of Cambodia] says this election [was] not free and fair, they can organize a re-election, but they [did] not say anything…. They say the election is acceptable.”

Both Comfrel and Nicfec are members of the Electoral Reform Alliance, a group of NGOs that last month issued a detailed report on July’s national election, which concluded that the many irregularities on election day were “enough to undermine confidence in the electoral process and its outcome.”

The CNRP has consistently called for a full and credible investigation into those irregularities, a proposal that has been flatly rejected by the CPP, leading the opposition to boycott parliament and take their grievances to the streets.

Mr. Panha and Mr. Hang on Monday also endorsed a suggestion made Friday by rights group Adhoc that the CPP and CNRP agree to hold early elections in about two years, enough time to implement some key reforms that could prevent a repeat of the problems that marred July’s poll.

Son Soubert, a former member of the Constitutional Council who has since allied himself with the opposition, said the CPP did not even have to bother dissolving parliament to make way for new elections. Like the CNRP, he believes the current Assembly is not legitimate because the boycott by the opposition’s 55 lawmakers has deprived it of a quorum.

Without the opposition’s 55 parliamentarians, he said Mr. Hun Sen was merely heading a “caretaker government” and free to call new elections at any time.

Unlike Adhoc, Comfrel or Nicfec, though, he said Cambodia could not wait another two years for the next poll, as an outbreak of violence is growing more likely the longer the political deadlock drags on.

The CNRP staged the largest anti-Hun Sen demonstration the country has seen in decades on Sunday, and has threatened to block national roads heading in and out of Phnom Penh in January if its demands for new elections or Mr. Hun Sen’s resignation are not met. The government has said it would dislodge any such roadblocks by force if necessary