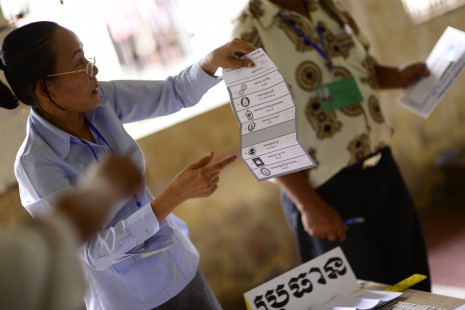 The opposition CNRP and rights organizations have been calling for electoral reform since July’s national election was marred by widespread allegations of voter fraud, but far from being a multibody committee, the sub-decree indicates the ruling CPP intends to handle electoral reform on its own.

The commission, which is made up primarily of CPP secretaries of state at the ministries of Interior, Justice, and Commerce, is to research elections held in other countries, though which countries’ practices should be assessed is not specified, according to the document dated December 9 and signed by Prime Minister Hun Sen.

“In order to establish an election reform framework in accordance with the principle of multiparty and liberal democracy and the rule of law” the commission is also supposed to oversee a national workshop to hear recommendations from the National Election Committee, registered political parties, NGOs, embassy representatives, government officials and lawmakers and various other interested parties.

Recommendations from the workshop would then be passed to Mr. Hun Sen, who would pass them on to the Council of Ministers for consideration.

Koul Panha, executive director of the Committee for Free and Fair Elections in Cambodia, said the proposed workshop was a smokescreen for a reform effort that is clearly one-sided.

“Election reform is not about the government, but a joint mechanism of the key political parties, especially the ones with seats in the National Assembly,” he said.

“[Both sides] agreed on September 16 that they would have a joint mechanism, but this is only the CPP side,” he said.

“The CPP themselves must respect what election reform means and be inclusive,” he added.

CNRP spokesman Yim Sovann, who is also a lawmaker-elect, said the establishment of the CPP-only commission is a tactic to delay progress toward genuine electoral reforms, and that there was no point in inviting the opposition to a national, multiparticipatory workshop if it is ultimately run by the ruling CPP.

“We reject this committee. It is unacceptable and meaningless. Any clear reform related to the election must have the participation from the CNRP…. The people who created the problems cannot solve the problems themselves,” Mr. Sovann said.

Laura Thornton, country director of the Washington-based National Democratic Institute, said she was “curious as to why this commission was formed without involving civil society organizations working hard on these issues or, more importantly, the CNRP, as the parties are the key stakeholders here.”