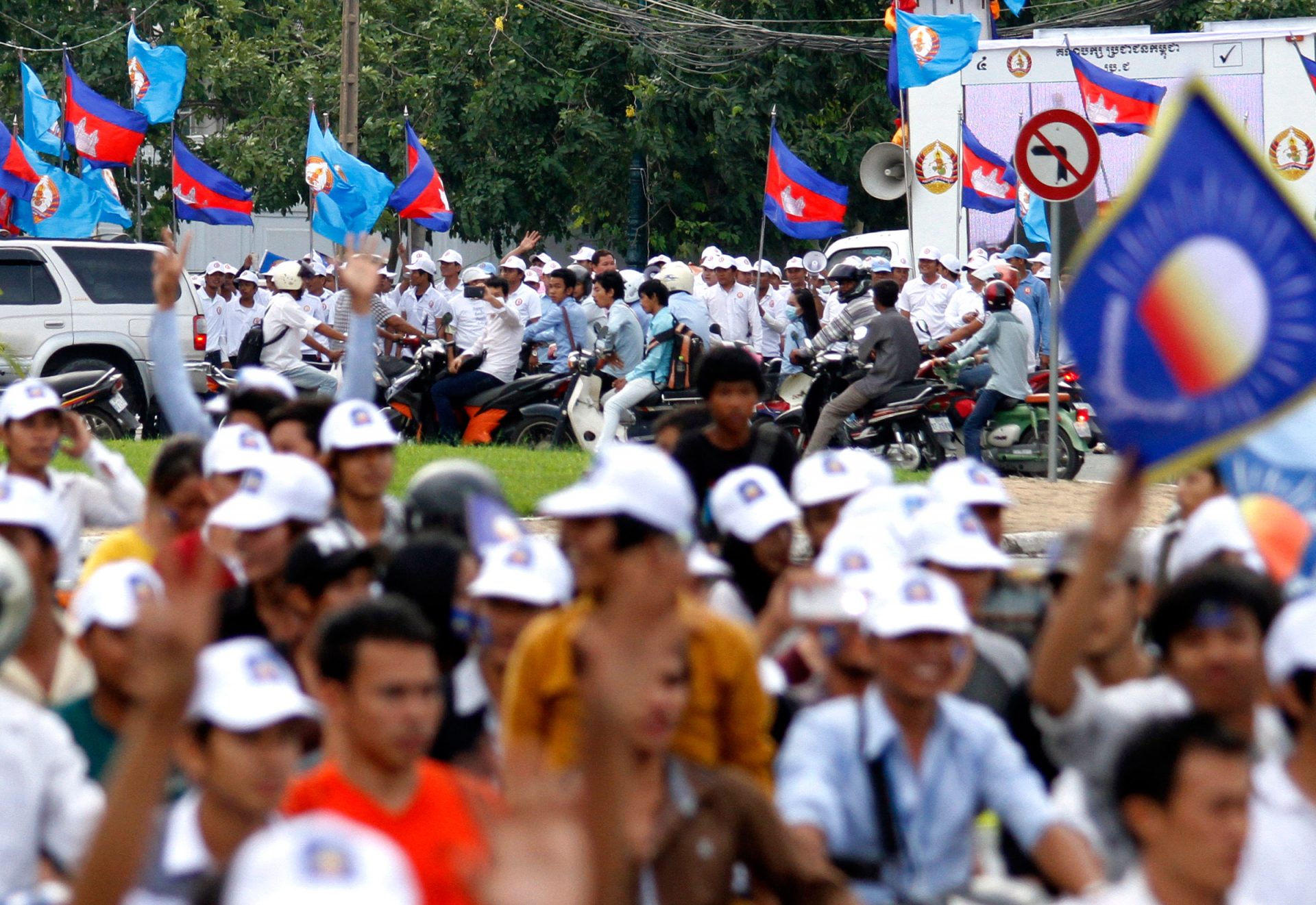 Less than a week into the official election campaign period, supporters of Prime Minister Hun Sen’s ruling CPP have firmly established their dominion along Phnom Penh’s streets and especially in the centrally located Wat Botum park.

Since the campaign season began on Thursday, CPP youth supporters have established a substantial, permanent presence in Wat Botum park, one of the largest open areas in central Phnom Penh at the intersection of two of the city’s main thoroughfares—Suramarit and Sothearos boulevards.

Phnom Penh deputy municipal governor Khourn Sreng said city authorities had granted Wat Botum to the CPP as the ruling party had approached authorities about using the area for its campaign before the opposition.

“We offered Wat Botum park to the Cambodian People’s Party because this party came to ask for permission first,” said Mr. Sreng, adding that City Hall and the Phnom Penh Election Committee had told the opposition Cambodia National Rescue Party (CNRP) it was allowed to conduct its campaign events in Freedom Park, an infrequently used open space tucked between lightly trafficked Streets 106 and 108.

Since establishing its presence in Wat Botum park, the CPP youth have made a noisy, and somewhat intimidating, show of their affection for Mr. Hun Sen, as well as their distaste for their main opposition in the upcoming national election. On a number of occasions on Monday, CPP supporters intermittently made a human chain across the westbound lane of Suramarit Boulevard in order to prevent CNRP supporters on motorbikes and tuk-tuks from passing through.

The CPP youth continued to block the street, forcing travelers to find alternate routes through the city, late into the evening on Monday, chanting pro-CPP slogans as music and messages from CPP leaders blasted from a wall of speakers trucked into the park.

On Tuesday, the street in front of the CPP campaign area at Wat Botum was cordoned off by police at the behest of City Hall, who said that it was necessary to close the street in order to ensure public safety as protesters from the Boeng Kak eviction community attempted to demonstrate in front of Mr. Hun Sen’s villa down the street.

“We closed this road because we are worried about security due to the Boeng Kak residents’ protests,” Mr. Sreng said, adding that the street would be re-opened today.

“I think that blocking the road during the election campaign is not right because this action is banned under the election law. The blockage has the potential of disrupting public order,” Mr. Nytha said.

However, Lieutenant General Khieu Sopheak, spokesman for the Ministry of Interior, said the action was legal because the CPP youth had received express permission from municipal authorities to block the road.

“Political parties are able to block the road for election campaigns if they received permission from relevant authorities,” he said.

CNRP spokesman Yim Sovann said that the ruling party was being given favorable treatment in being allocated unique access to Wat Botum park.

“The governor of the municipality is a member of the CPP. They should alternate, 15 days for CPP and 15 days for CNRP [in Wat Botum park], but they do not do that. They [City Hall] know the best place for campaigning and they are the one who decides because there is a conflict of interest,” he said.

The Phnom Penh Election Committee also informed the CNRP on Tuesday that it must take down hundreds of party banners that have been hung on electricity and telephone poles throughout the city, citing election rules that preclude political parties from using state property in its campaigns, according Mr. Sovann.

“Now they [the Phnom Penh Election Committee] have ordered us to remove the banners that we have posted on the electricity polls. But our [Phnom Penh] working group does not agree to remove them,” Mr. Sovann said, noting that the CPP has also put up scores of their own banners on poles planted in sidewalks along the city’s main streets.

“The CPP can do whatever they want. They post their banners, their signboards and their leaflets all over the place. When my party posts only the banners on a few electricity polls, they order us to remove them,” he said.

Long Chhenkai, the director of the Phnom Penh Election Committee declined to comment on the rationale for the decision, and the accusations of political bias against his committee.

“We have already told the parties about our decision, ask them for further information,” he said.

Mr. Sovann, of the CNRP, said that the election committee told his party that their signs needed to be taken down “in order to preserve the beauty of the city” and that the municipality needed to use the electricity polls to promote its celebration of the fifth anniversary of the designation of Preah Vihear temple as a World Heritage Site on Sunday.

Hundreds of young CNRP supporters gathered Tuesday in front of the National Assembly before driving through the city in a raucous display of support for the opposition party.

Khut Samol, 33, a CNRP member who helped organize Tuesday’s rally, said that the opposition party was now organizing mostly mobile rallies to avoid disturbances and to work around City Hall restrictions on their campaigning.

“The CPP is the ruling party so they can use whatever spaces they want. Now we are planning rallies to meet in different places every day so they can not disrupt us,” he said.