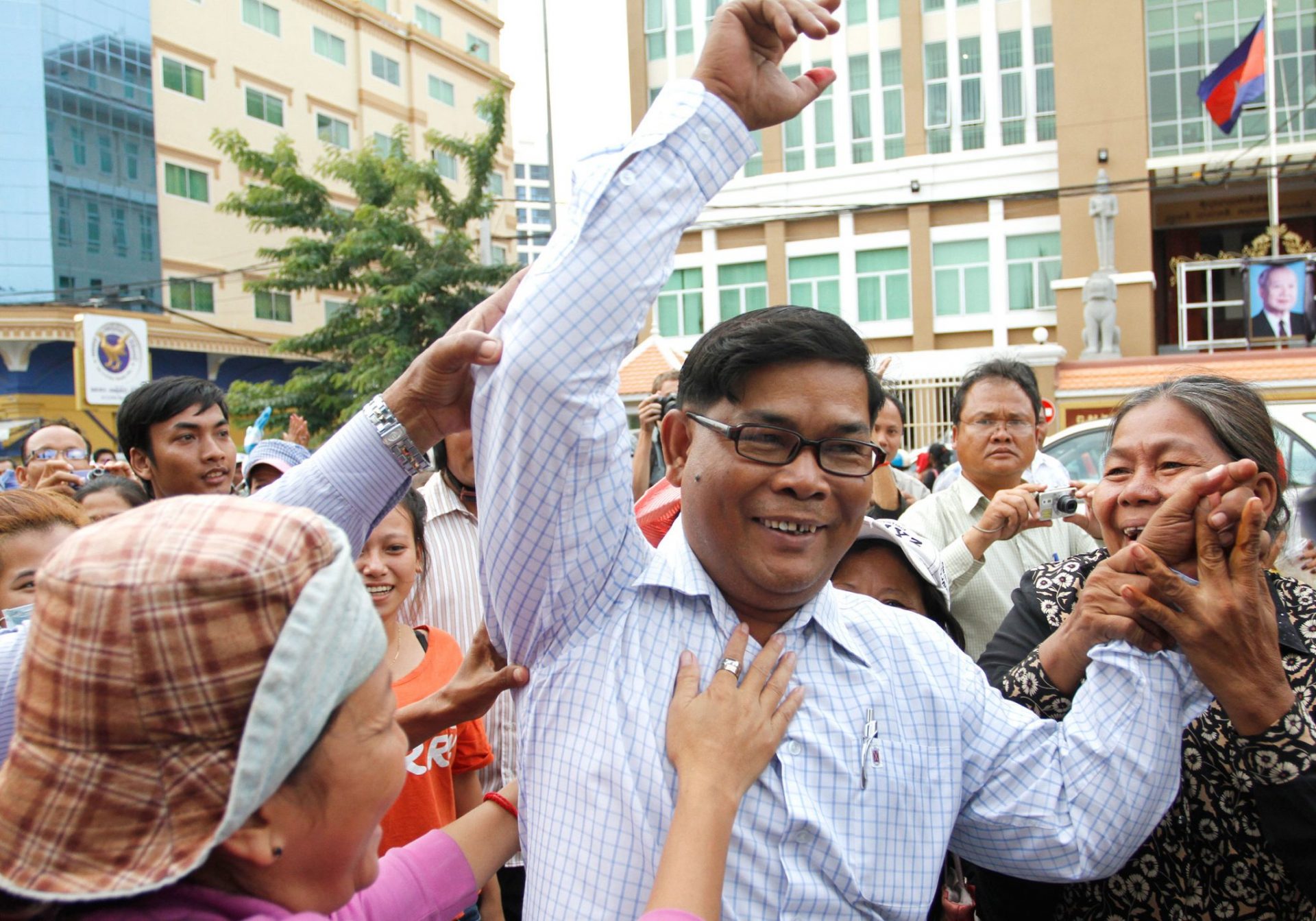 The Phnom Penh Municipal Court yesterday questioned the long-serving human rights investigator Chan Soveth, who has been charged with aiding a perpetrator in a so-called secessionist movement in Kratie province in May.

Mr. Soveth, who is deputy head of monitoring at local rights group Adhoc, was questioned by investigating Judge Chhe Virak for more than an hour about his role in helping the alleged perpetrator. Though he was not detained following his court appearance, the criminal charges against Mr. Soveth still stand, Adhoc said in a statement.

At a press conference held after the court appearance, Adhoc President Thun Saray said that Mr. Soveth had unknowingly aided a man named Ma Chhang, a suspected leader of the alleged secessionist movement.

Mr. Soveth’s defense—which argued that he would not have assisted Mr. Chhang had he known the man was viewed as a criminal in the eyes of the government—raised questions about how human rights workers will aid those who might need assistance in the future, particularly in cases with political overtones.

“He was not aware that the person was a perpetrator. His help was a humanitarian act because he saw a starving person who hadn’t had rice to eat for three days,” Mr. Saray said of Mr. Chhang, adding that Mr. Soveth gave the man $54 to pay for food, a two-night stay in a guesthouse and transportation back to his home in Kratie.

Long Lunn, one of Mr. Soveth’s three defense lawyers, said that had his client known that Mr. Chhang was wanted by the police, he would likely not have assisted him.

“Based on my client’s claim, the person who came and met him [Mr. Soveth] introduced himself as Tin Chhang, not Ma Chhang. When they met, he [Mr. Chhang] claimed he was the victim of a land dispute in Kratie province,” Mr. Lunn said.

“If he [Mr. Chhang] had claimed that he was a person the court had issued an arrest warrant for, I think that Chan Soveth would not have helped him. He [Mr. Soveth] would have reported to the competent authorities,” Mr. Lunn said.

Upon exiting the courthouse, Mr. Soveth was cheered by hundreds of supporters, from fellow rights workers to members of communities affected by land disputes in recent years.

Mr. Saray said at the press conference that deciding whether or not to help people wanted by the authorities must be done on a case-by-case basis.

“Normally, as human rights NGOs, we have to take these kinds of risks,” Mr. Saray said. “If we dare to say [a] man is not a criminal, the court will accuse us of being accomplices.”

On May 16, the Ministry of Interior named five men, including Mr. Chhang, as leaders of the alleged secessionist movement in Kratie’s Broma village. Locals involved in the incident have said they were merely attempting to prevent the confiscation of their land by a rubber company.

On October 1, popular radio station owner Mam Sonando was sentenced to 20 years in prison for his role in the alleged secessionist movement. National and international human rights workers have branded the charges against Mr. Sonando political, and U.S. President Barack Obama has described him as a political prisoner.

Mr. Chhang, who testified against Mr. Sonando at his trial, was acquitted by the court on the same day.

Sok Sam Oeun, one of Mr. Sonando’s lawyers and head of legal aid group Cambodia Defenders Project, said yesterday that prosecuting human rights workers who offer assistance to those who could be considered prisoners of conscience sets a dangerous precedent.

“It is a threat for the future,” Mr. Sam Oeun said, adding that rights groups must be allowed to provide humanitarian assistance to anyone that has been branded a suspect simply for standing up to the government.

“If they [rights groups] provide means for escaping, it is wrong …[but] if he only gave rice for eating, it is only humanitarian,” Mr. Sam Oeun said.

Independent political analyst Chea Vannath said that whenever possible, human rights groups should seek to aid those who would otherwise have no one to defend them—even if they are being sought by the authorities.

“Mainly, the human rights defendants are needed to counter the violent action of the police, to ensure that the human rights principles are applied and the due process is taking place,” Ms. Vannath said.