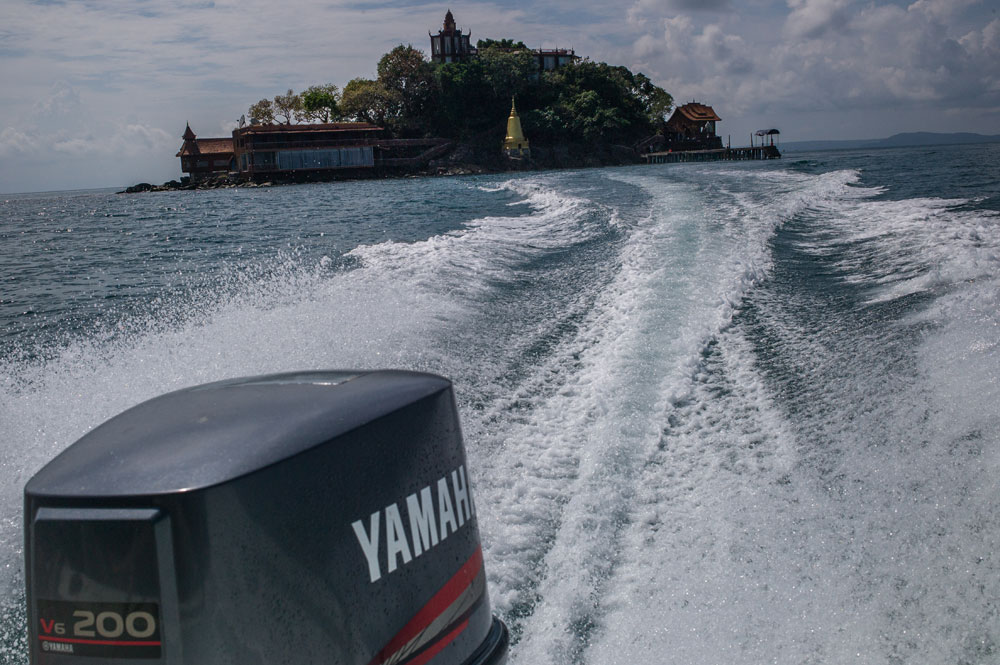 The Preah Sihanouk Provincial Court has ordered fugitive Russian oligarch Sergei Polonsky to vacate his home on Koh Dek Koul, a tiny private island off the coast of Sihanoukville, in response to a request to the court by his rival, Nikolai Doroshenko, lawyers for the two men said Tuesday.

A court notice issued on December 3 and delivered on December 6 to the island—to which both men lay claim—gave Mr. Polonsky until Monday to leave, though one of his lawyers said his client had no intention of going anywhere.

“To be informed: Because of the decision…on June 6 by the Preah Sihanouk Provincial Court, the eviction of Mr. Sergey Yurievich Polonskiy [sic] and his men who are staying on Koh Dek Koul must occur before December 15, 2014,” the notice says. “If you do not comply with this notice, we will take legal measures,” it adds.

The June 6 injunction, signed by Judge Nhim Visal, orders the “provisional” expulsion of Mr. Polonsky on the grounds that the island belongs to Mr. Doroshenko’s Sea Snake Investment firm and was being unlawfully occupied by Mr. Polonsky.

Mr. Doroshenko said Tuesday that he was well aware that Mr. Polonsky had not left the island, but that he was confident the court would ensure Mr. Polonsky’s expulsion by Thursday.

“Polonsky is still on the island and has not yet left. If he does not leave between the 16th and the 18th, the court will…force him to leave,” he said, referring further questions to his lawyer, Sun Sam Ol.

Mr. Sam Ol said his client had urged the court to follow up on the June injunction because of ongoing legal battles between the two men. Earlier this month, Mr. Doroshenko publicly accused Mr. Polonsky of being behind an attack on his son in Sihanoukville, prompting Mr. Polonsky to fire back with a defamation suit.

“My client is worried and asked the court to enforce the injunction…because they have had arguments with each other recently,” Mr. Sam Ol said.

“This is just an excuse to make my client scared,” he said. “In fact, my client is living and doing his business as usual on Koh Dek Koul.”

Kaspars Cekotins, another lawyer for Mr. Polonsky, said the court notice had no legal basis, as it was filed too long after the June injunction.

“For such an order to be legal, it needs to be filed within 15 days from the decision of the court,” Mr. Cekotins said, adding that despite the December 15 deadline passing, no effort had been made to enforce the notice.

“I’m here on the island and nothing has happened, no one has come here,” he said.

Mr. Cekotins said Mr. Polonsky—who was unavailable to comment Tuesday because he was hosting a business seminar on another island off the coast—effectively owned Koh Dek Koul and was not planning to leave it.

“It’s his island. There is no need for him to [leave],” he said. “All the money ever invested and all the work, he is the only one.”

Mr. Polonsky, once one of the richest men in Russia, was charged in absentia by the Russian Interior Ministry with embezzling millions of dollars from investors in a Moscow apartment complex. He was subsequently placed on Interpol’s list of most-wanted criminals, but Cambodian courts have denied multiple extradition requests from Russia.

On Tuesday, the Russian Legal Information Agency reported that Moscow had sent yet another request to Cambodia for Mr. Polonsky’s extradition, citing an unnamed Cambodian source quoted by the Moscow-based TASS news agency.

“[The source] said that those who lost their money as a result of Polonsky’s alleged construction fraud have filed for compensation,” the report said. “He also said he didn’t know when the Cambodian authorities would make a decision on the new extradition request.”

In a statement posted to his Facebook page last night, Mr. Polonsky dismissed the media reports as unsubstantiated and slanderous.