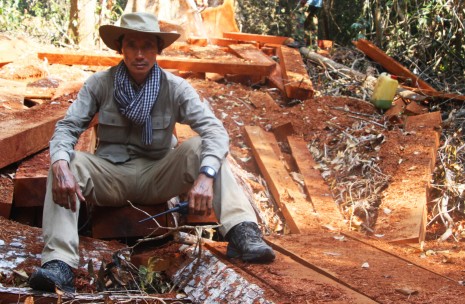 The Koh Kong Provincial Court yesterday said it had dropped its investigation into the killing of environmental activist Chut Wutty, allegedly by a now-deceased military police officer in April.

The court made the surprise announcement during the trial of Rann Boroth, who took the stand yesterday for the unintentional killing on April 26 of In Ratana, the military police officer accused of killing Chut Wutty the same day.

The judge said he closed the Chut Wutty case in July and cited Article 7 of the Criminal Procedures Code, which lets the courts drop an investigation if the offender is dead, said In Kongchet, provincial coordinator for rights group Licadho, who was present at the trial.

It was the first public announcement that the Chut Wutty murder investigation had ended, Mr. Kongchet said.

As for Mr. Boroth’s trial for unintentionally killing the military police officer who had just slain Chut Wutty, Mr. Kongchet said the prosecution called only three of the seven witnesses questioned in the case and that only one of those admitted to seeing both men get shot.

According to Mr. Boroth’s version of events, Chut Wutty was shot dead by In Ratana, the military police officer, after a heated argument between the two. Mr. Boroth, a security guard for a logging firm, claims that he then accidentally shot In Ratana in the head while trying to take from him the automatic rifle he had just used to kill Chut Wutty.

The witness in court yesterday corroborated that version of events, which was first presented to the public by a high-level government committee set up to investigate the killing of the forestry activist.

The court will announce its verdict on Monday. If convicted, Mr. Boroth could face up to three years in jail.

Human rights groups have faulted the court from the start for a shoddy investigation in which it failed to interview all witnesses and the government for repeatedly shifting its account of Chut Wutty’s death while the activist was investigating reports of illegal logging in Koh Kong’s Cardamom Mountains.

On the day of the shooting, Interior Ministry spokesman Khieu Sopheak said military police claimed that Chut Wutty fired first with a pistol and that someone—at that point it was not yet clear who—fired back in defense.

A second story quickly replaced the first. In that version, In Ratana shot Chut Wutty and then immediately turned his own rifle on himself and committed suicide—apparently in grief over killing the conservationist.

“This case is still a mystery because the court did not investigate the cause of Wutty’s death while he was looking for illegal logging,” he said.

Chut Wutty’s son, Cheuv Odom Reaksmey, said he had not heard of the court’s decision to close the investigation.

“We want to know who killed him. I don’t believe In Ratana killed my father.”