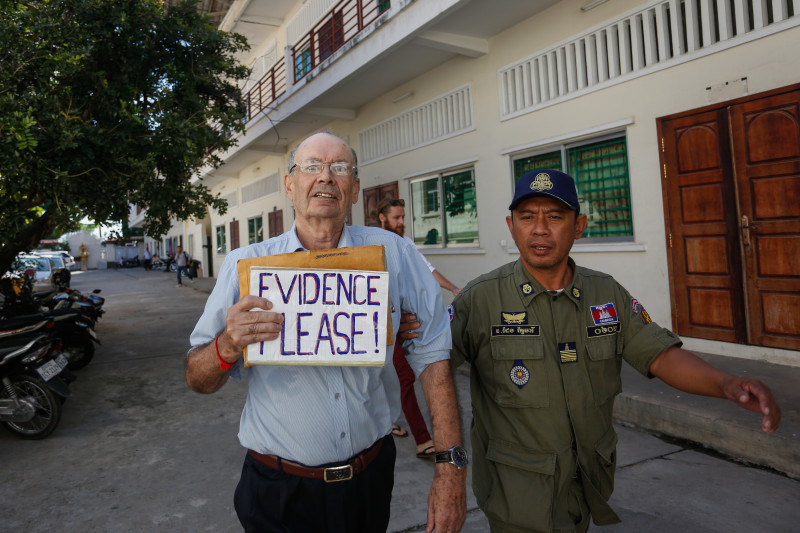 A British man convicted of raping a teenager in Phnom Penh in 2009 had his case thrown out of the Court of Appeal on Friday, then accused a prominent NGO head of conspiring to frame him.

Judge Pol Sam Oeun made short work of the hearing, declaring that as David Fletcher, 71, had already had one appeal rejected, the court would not process his latest appeal—a complaint against the procedure of the Phnom Penh Municipal Court, which in 2011 sentenced him in absentia to 10 years in prison.

“In accordance with the law, he only has the right to choose one path,” the judge said. “The appeal process is not correct.”

“The Court of Appeal does does not accept the appeal.”

Outside the courthouse, Mr. Fletcher—who has been convicted of twice raping Yang Dany, a 17-year-old girl he knew through his unregistered NGO, The Rubbish Dump Project, which once provided assistance to families living at the Phnom Penh dump—said that he had been set up.

Mr. Fletcher claimed that Scott Nee­­son, head of the Cambodian Children’s Fund (CCF), which also works with children at the dump, had felt threatened by his presence, and conspired to have the rape charges fabricated.

“Neeson saw me as a threat. We had an argument maybe two years before [the rape allegations arose] on the dump, and I told him he was a waster,” he said.

Mr. Fletcher was arrested in Thai­land on June 27, 2010, two weeks before Ms. Dany’s mother filed the rape complaint with Cambodian police, and one week after media reports claimed that Mr. Fletcher was using his charity to access children.

“He tells their parents he wants to adopt them, care for them. They think because he gives out food he is good. But he is grooming them.”

Mr. Neeson could not be reached for comment on Friday. CCF country director Sok Chan­noeurn said she did not know enough about the case to comment.

In October last year, Ms. Dany and her mother, Keang Sokun, recanted the rape allegations in an interview, saying that child protection NGO Action Pour Les Enfants (APLE) had told them they would receive $5,000 in compensation if they made the claims.

“APLE knew that Dany was not raped,” Ms. Sokun said at the time, adding that while Mr. Fletcher had removed her daughter’s clothes, the encounter went no further.

As the legal representative of Ms. Dany, APLE has lobbied against any retrial, despite acknowledging that a medical examination showed that the teenager’s hymen remained intact after she was raped.