CNRP Vice Presidency Up for Grabs

There is little doubt among observers that Kem Sokha will be named as president of the CNRP at a snap party congress set for Thursday, but who will replace him as the party’s deputy leader is either a closely guarded secret or remains up in the air.

It is unclear even whether a single person will take on the role or if there will be multiple deputies, a change that former opposition leader Sam Rainsy appeared to support in a telephone call mysteriously leaked online. 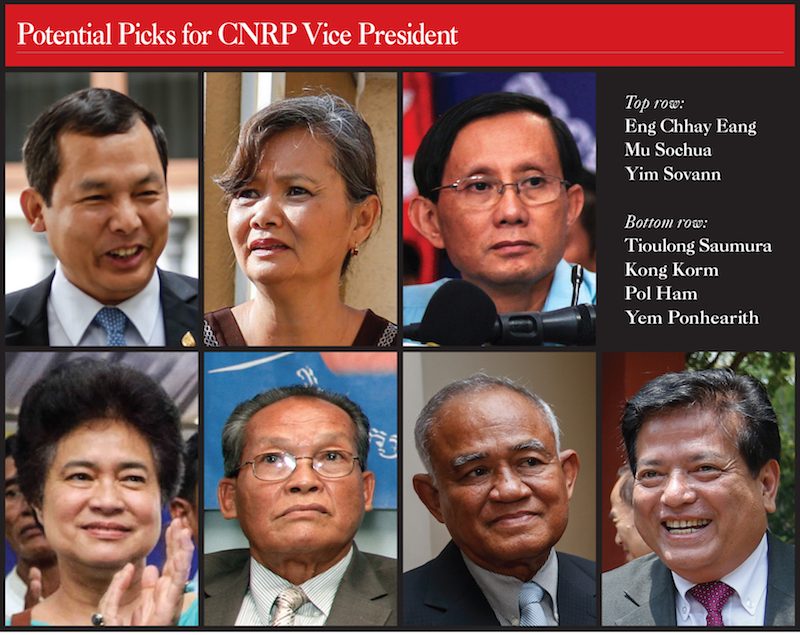 “I just know the formula—the three vice presidents formula—is good, Sovann,” a man who sounds like Mr. Rainsy is heard telling another man, allegedly CNRP spokesman and executive committee chairman Yim Sovann, who is among the leading candidates for a vice president post.

Others well-positioned for the role include Eng Chhay Eang, one of Mr. Rainsy’s closest confidantes and deputy head of the party’s executive committee; Tioulong Saumura, Mr. Rainsy’s wife and a senior lawmaker; and Mu Sochua, the party’s director of public affairs.

In another recording leaked online this week, allegedly between high-ranking opposition officials, Kong Korm, a longtime associate of Mr. Rainsy who retired from politics last year saying he was too old, was also identified as a possibility.

The party’s current bylaws imply that there should be a single president and vice president, and says they must agree on major decisions. Appointing multiple deputies would likely require amendments to these rules. If the consensus rule were to be removed, it would drastically reduce the clout of vice presidents, removing the veto power enjoyed by Mr. Sokha.

If there is only one vice president, it will almost certainly be a loyalist to Mr. Rainsy, whose eponymous party merged with Mr. Sokha’s Human Rights Party (HRP) in 2012. However, if there are multiple spots, that may make way for an official loyal to the new president.

The top former HRP officials in the opposition are Pol Ham, head of the CNRP’s steering committee, and Yem Ponhearith, a spokesman and head of party administration.

All of the leading candidates, apart from Mr. Korm, are on the CNRP’s 25-member standing committee and are among the party’s 55 lawmakers.

Ms. Sochua, who was the women’s affairs minister for Funcinpec in the 1990s before joining Mr. Rainsy’s opposition movement, has a global profile for her work advocating for women’s rights in Cambodia. She declined to comment on Monday on the leadership changes, as have all party officials since Mr. Rainsy resigned two weeks ago.

Mr. Rainsy’s shock resignation was spurred by the ruling CPP’s decision to push through amendments to the Law on Political Parties that would ban convicted criminals from party leadership positions—Mr. Rainsy is currently facing nine years in prison for convictions widely viewed as being political in nature and has been exiled from Cambodia. The law, which has drawn public statements of concern from the U.S. and E.U., would also allow the Interior Ministry and the courts to suspend or dissolve parties over a vaguely worded list of infractions.

The CNRP initially planned to allow Mr. Sokha to serve as acting president until April next year, when its quinquennial convention was planned. However, fearing that the government would not accept a candidate list for June’s commune elections that was not endorsed by a permanent president, the party decided to hold a congress this week to appoint new leadership.

Commune council candidate lists must be submitted over the weekend.

Ms. Sochua said the standing committee would meet today to settle on a proposal for new leaders, and then send the list to the 110-member steering committee for approval on Wednesday before it goes before the full party congress of about 1,000 members.

Ms. Sochua said she did not know what would be discussed at today’s standing committee meeting apart from the leadership, but said “anything” might be on the table.

“There are so many rumors,” she said. “I am not commenting. We take this very seriously.”

Among those rumors—perpetuated by what the CNRP says are fake letters released on Facebook—is that Mr. Rainsy has been pushing for his wife, who spends much of her time with him in Paris, to receive a leadership position. Mr. Rainsy has declined to comment on the changes, while Ms. Saumura did not respond on Monday to an emailed request for comment.

Mr. Sovann, Mr. Chhay Eang and Mr. Ponhearith have all been embroiled in a series of leaked phone conversations—all mysteriously recorded and posted to Facebook, raising privacy concerns shrugged off by the government—purporting to expose them speaking with mistresses.

Mr. Chhay Eang, who stepped down from a leadership position in the Sam Rainsy Party (SRP) more than a decade ago due in part to a gambling problem, saw the problem come back to bite him last month when photographs of him placing bets at NagaWorld casino in Phnom Penh were leaked online.

Mr. Ham, 70, was the third- ranking member of the CNRP behind Mr. Rainsy and Mr. Sokha and has deep ties to the resistance against Prime Minister Hun Sen, having worked in the 1980s as the radio director for Son Sann’s pro-democracy movement based out of refugee camps on the Thai border.

Mr. Korm, 75, was most recently president of the legacy SRP, and a longtime lawmaker with the party whose son is now a CNRP parliamentarian. He briefly served as foreign minister in the 1980s under the socialist government led by Mr. Hun Sen. Upon retiring from politics last year, opposition senator Chep Kim Eang said it was time for new people to step into leadership roles.

“The reason for his retirement is firstly due to his old age and secondly that he wants to give a chance to the younger generation who are full of energy,” he said.

Cham Bunthet, a political analyst and consultant, said he would be disappointed to see a politically safe pick like Mr. Korm put into such an important role in the opposition. But he said that whoever was placed in the position—or positions—was unlikely to make any major changes to the CNRP.

“They don’t want to change the structure, just change the face,” he said, adding that he believed Mr. Rainsy would continue to hold silent sway within the party. “I don’t see changes in leadership.”