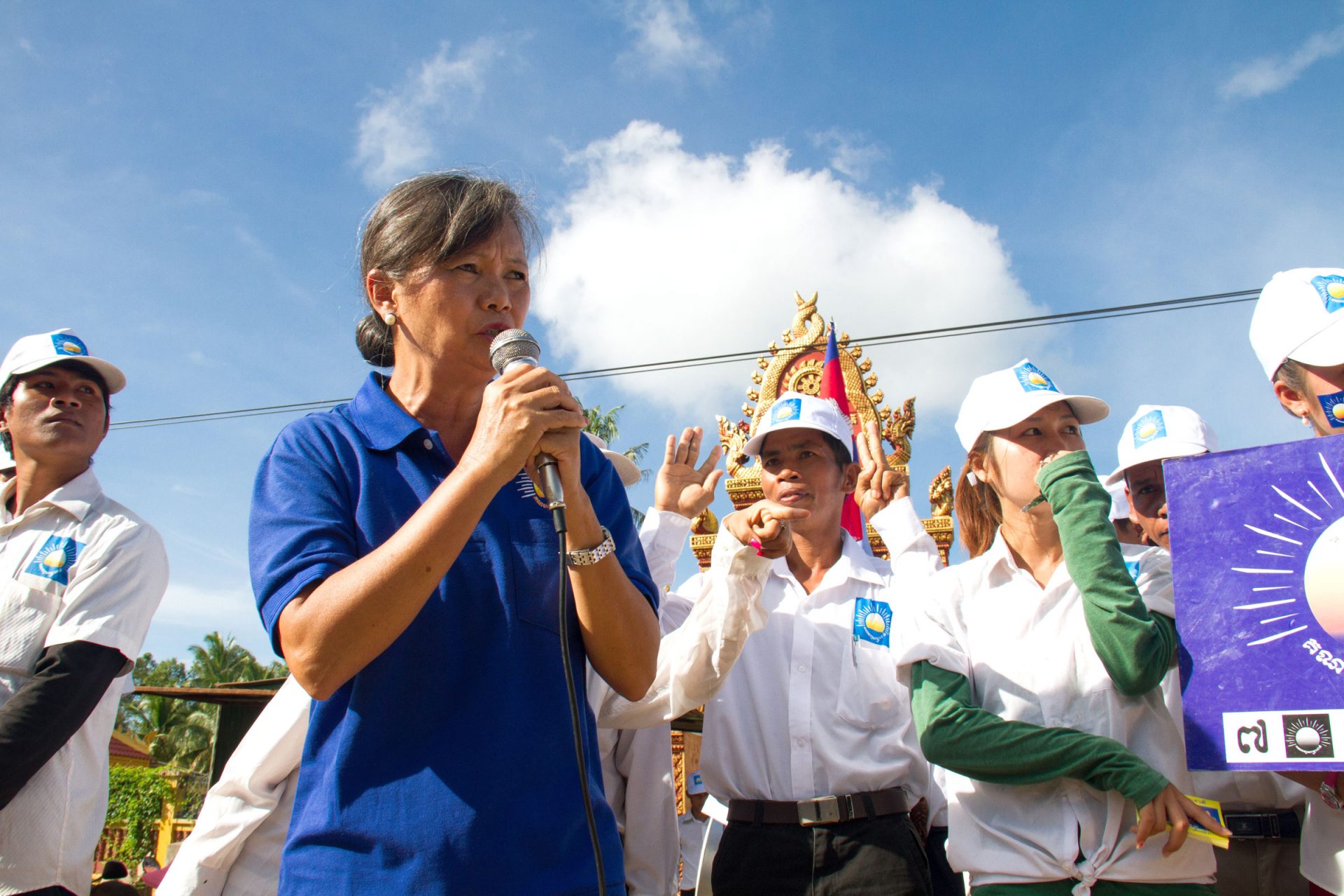 Almost every house and every tree in this former Khmer Rouge stronghold is adorned with stickers of the ruling CPP.

Ms. Nareoun’s house, too, has one of the ruling party’s ubiquitous stickers—but only on the right side of her wooden home, where her ex-husband lives.

On the other side of the house, where Ms. Nareoun lives, the emblem of the main opposition, the Cambodia National Rescue Party (CNRP), is displayed.

When Ms. Nareoun and her husband divorced several months ago, they decided to split their home right down the middle. A wardrobe divides the entrance to the house and their two separate lives and political views.

In January, Ms. Nareoun decided to run as an election candidate for the CNRP in Samlot. Secretly, she said, many residents have started to support the opposition, even if their houses bear the CPP’s campaign stickers.

“They are scared…they say that they are afraid that if the CNRP doesn’t win, they would face difficulties,” she said.

Slowly and steadily, Ms. Nareoun and her supporters hope to change all that. They drive from house to house in Samlot, lobbying the area’s outspoken CPP supporters—who are still proud of their Khmer Rouge heritage—about the CNRP’s policies.

Until recently, she said, most of the former Khmer Rouge in Samlot did not care much about events outside the area. But in 2011, the government granted a 5,000-hectare economic land concession in Samlot to a local businessman. Five hundred of the more than 5,500 families in Samlot stood to lose land, about 1,000 hectares in total, she said. After complaining to a human rights group, the company took half that amount, 500 hectares, from the 500 hundred families.

“I helped the people [keep their land] and from that, I gained a lot of support and respect,” Ms. Na­reoun said.

The loss of land has also offered Ms. Nareoun a way to talk about an election topic that most of the residents will listen to: the Vietnamese.

Though the land concession in Samlot was not for a Vietnamese company, many other concessions around the country are owned by firms from Cambodia’s eastern neighbor, Ms. Nareoun said, adding that residents have now started to care about the government’s land policies.

“Some former Khmer Rouge say that they’ve fought against the Vietnamese, and now they are learning that Vietnamese companies get land concessions for 99 years…they are not happy. That’s why they support us,” she said.

This week, more residents began to put up CNRP stickers in Samlot, like 29-year-old Hul Srey Leang, a farmer whose husband is a police officer.

“I am concerned about it,” Ms. Srey Leang said timidly, referring to land concessions. Her neighbor, 59-year-old Chhay Bun, said he has already made up his mind. “The leaders of the ruling party have been here for too long,” he said.

Looking at his two granddaughters playing in the grass near his house, Mr. Bun said that he feared repercussions for supporting the CNRP, but he hoped his outspoken support would convince others to speak their mind.

Durian farmer Bou Sarat, 58, said that she received a land title from Prime Minister Hun Sen’s student volunteers last month, and she would vote for the ruling party to keep peace.

“I’ve heard there would be a war, so let’s vote for the CPP. I don’t want more war, I am fed up with packing and running,” Ms. Sarat said.

There are eight National As­sembly seats at stake in Battambang province, but since 150,000 people live in Battambang City, the CNRP has focused most of its human and financial resources there.

While campaigning in Samlot is done door to door, the campaign in Battambang City is a more direct locking of horns with the CPP, whose campaign in the province is being led by Interior Minister Sar Kheng.

On a daily basis, about 100 CNRP supporters, many of them youth, meet at the opposition’s modest headquarters in Battambang City to discuss politics and film short video clips to distribute via social media.

The youth supporters speak of difficulties getting educational scholarships and jobs, their friends who have left their families to work in Thailand, the corruption and poverty that is depriving them of a better future.

By supporting the CNRP, they believe they have found a solution.

“They value women’s rights, they don’t look down on the poor, they want to help the elderly,” said 23-year-old Chan Kosal, a songwriter for the CNRP.

Leading the opposition’s campaign in Battambang City is Mu Sochua, former Minister of Women’s Affairs and former lawmaker for the SRP.

Each day, Ms. Sochua has one message to sell the people of Bat­tambang—that everything will be better under the CNRP.

The opposition will lower the price of electricity, for example, ensure that health centers are better equipped and introduce a minimum national pension for citizens over the age of 65, she says.

“People are poor, and they are desperate for change,” she said.

Implementing the CNRP’s promises would far surpass the current government’s budget. But for this, too, the CNRP has a solution, and the calculation is simple.

“We will double the budget because we will take care of corruption. You know how much money is collected from the entrance fee for Angkor Wat? $120 million per year. How much goes into the budget? $20 million. We lose $100 million to Sok Kong,” Ms. Sochua said, referring to the owner of oil firm Sokimex, which operates the Angkor Archaeological Park.

Hundreds of millions more are lost to corrupt tax officials, to low tax rates for casinos and the bribes paid to government officials, she said.

By “cleaning-up” the country, Ms. Sochua said, the CNRP hopes to get rid of corruption, impunity and favoritism, and instead install a well-functioning, unbiased and hard-working government that treats every citizen equally.

She is describing a utopian state.

But Ms. Sochua believes that the CNRP could reach many of its goals within the first 100 days in power, and said that she expects her party to win 80 of the 123 seats in the Assembly.

Standing on the back of a pick-up truck, dressed in a blue shirt to distinguish her from her supporters, Ms. Sochua squinted against the sunlight, smiling and waving at people.

The convoy of about 100 supporters, singing and yelling slogans, came to a halt at Phsar Nath market in Battambang City, where Ms. Sochua gave a speech to explain the CNRP’s policies. Frequently, she yelled “B’do!” the Khmer word for “Change.”

Motorbikes drove by, some mildly intrigued, some unimpressed but willing to accept the CNRP flyers offered to them. Used to the daily hubbub of the campaign season, the market vendors sold their goods.

“Who won the elections five years ago? I was sick and couldn’t go,” Men Any, a 38-year-old fruit vendor asked.

At the neighboring stall, Run Nai, a vegetable vendor, said that she cared about the elections. But like many people in Battambang, talking about politics made her feel uneasy, and she answered the way many voters did this week.

“We know what we want in our heart.”