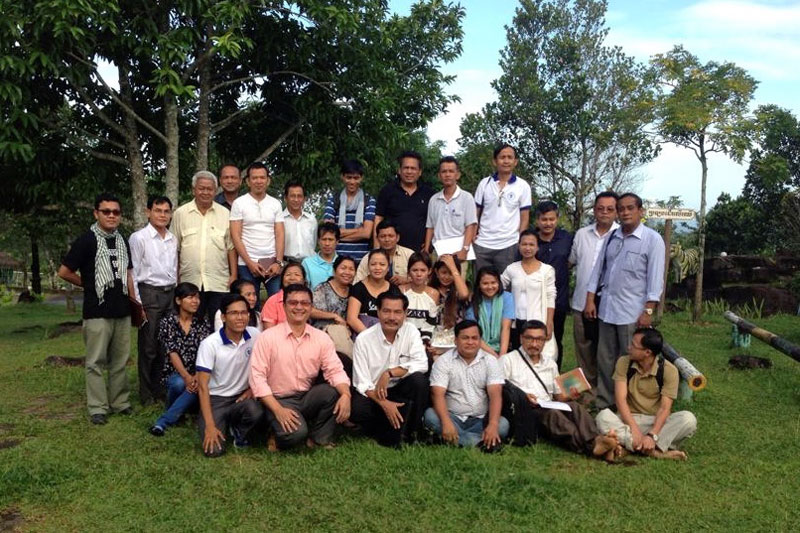 A feud between the eldest daughter of CNRP Vice President Kem Sokha and a teenage opposition activist who shot to fame during last year’s election has once again come to a head with claims the student activist is being used in a new effort to split the opposition.

Thy Sovantha, now 19, rose to prominence during the July 2013 election as the face of the popular “I Love Cambodia Hot News” Facebook news page, which was created to circumvent a national television blackout of the CNRP during the campaign.

Her popularity on social media quickly surged past that of opposition leaders, and in February the CNRP released a statement effectively expelling her. Party activists alleged at the time that Ms. Sovantha was working with the ruling CPP to divide the opposition.

The accusation was renewed on Friday by Kem Monovithya, the daughter of Mr. Sokha and the CNRP’s deputy director of public affairs, who wrote a post on her Facebook page claiming that political analyst Kem Ley and Ms. Sovantha plan to start a new party.

“A new party will be established, but right now they are temporarily forming as ‘The Association to Keep Track of Reforms’ and as various youth associations to avoid attacks from the public that they are splitting our voice,” Ms. Monovithya wrote.

“When the commune elections come, these groups will create a party on the pretext that the CNRP has not succeeded with reforms. This is their political right, it’s only that doing it will create no benefit and will break the image of solidarity among democrats.”

Since merging their respective Human Rights Party and Sam Rainsy Party to form the Cambodia National Rescue Party in July 2012, opposition leaders Mr. Sokha and Sam Rainsy have made a point of stressing unity, and insisted that their past political rivalry is not a threat to the solidarity of the movement against the ruling CPP.

Commune council elections are scheduled for February 2017 and will be the CNRP’s first major election since the opposition’s shock gain of 26 seats—giving the CNRP 55 seats to the CPP’s 68—in the 123-seat National Assembly in last year’s national election.

Ms. Monovithya suggested the creation of the group would be the first stage of a broader project to create a new party to rival the CNRP.

“It is an attempt to seize the CNRP’s recent gains that belong to the various youth groups, without creating gains on their own,” Ms. Monovitha continued in her post. “It’s clear there is no group that can round up large numbers of people without the banner of the CNRP.”

Ms. Monvithya said by telephone Sunday that Mr. Ley was the driving force of the plans for the new party and that Ms. Sovantha was being used as a pawn in Mr. Ley’s political ambitions.

“Any girl can have any plan,” she said. “It’s Kem Ley’s group. He’s trying to get the support from the youth, and he sees people on Facebook who are popular and wants to bring them under his wing.”

Mr. Ley, who has no relation to Mr. Sokha, has since the July 2013 election developed a significant profile as a political commentator, regularly appearing on Khmer-language radio spots such as Radio Free Asia’s nightly news show.

In recent weeks, he has been working on creating what he calls a coalition of “intellectuals, unions, and the private sector” that he says will issue reports to the CPP and CNRP and track reforms promised by both parties after last year’s election.

Last Monday, Ms. Sovantha also announced her plans to create and lead a new “Youth Alliance for Social Affairs,” which she says is not part of a plan to form a new party.

The next day, Ms. Sovantha—in a post to her personal Facebook page, which has more than 447,000 followers—elaborated briefly on the plans: “Very soon there will be a very big network of associations to track and push political issues.”

Both Mr. Ley and Ms. Sovantha denied by phone Sunday that they were planning to create a new party, but said they were at a conference in Sihanoukville to work out the internal rules of Mr. Ley’s new organization, with a mind to launch at the start of next year.

“No, this is just anecdotal information,” Mr. Ley said of the accusation he was planning to turn his organization into a political party.

“We’re making a social network, with unions, the informal economic sector and activists coming together to see how we can work together and fight human rights violations and bad governance in the system,” he said. “We will launch in the first quarter of 2015.”

“We will submit all the documents we are writing to all the political parties involved. If they follow them, if they reform, the CPP and CNRP…if they implement them, we will support them,” he said.

From the conference in Sihanoukville, Ms. Sovantha again denied that she had any plans to oppose the CNRP.

“I’m creating a new youth group not under the control of anyone. It’s for community service, not for any political objectives,” she said.

“If he creates a new party, I will not join him but if he makes new laws to send to the parties, I will join him,” she said.

“I think Ms. Monovithya should not worry. She does not have to worry about anyone making a new party, just make her own group stronger,” Ms. Sovantha continued. “What she said has no evidence. It is wrong and not true, it is fake. It’s not good for the CNRP or for her.”

This is not the first time Ms. Monovithya and Ms. Sovantha have been involved in a dispute over the young activist’s future plans. The CNRP statement from February that effectively expelled Ms. Sovantha from the party was first posted on Ms. Monovithya’s personal Facebook page.

Ms. Monovithya at the time directed questions about Ms. Sovantha’s ouster to Eng Ponlork, a youth activist who founded the “I Love Cambodia Hot News” page and oversaw Ms. Sovantha’s removal from it in October 2013 upon rumors of her disloyalty.

“I am worried. I wonder that she is CPP spy,” Mr. Ponlork said in February.

Mr. Ponlork explained that Ms. Sovantha’s aggressive and expensive Facebook advertising campaign indicated support from someone in the ruling party. “In just two months she gets 200,000 likes, if you just create a Facebook page… you cannot reach like that,” he said at the time.

Ms. Sovantha’s reach on Facebook has doubled since February, and she now boasts almost 450,000 followers.

On Wednesday, defending her plans to establish her new “youth alliance,” Ms. Sovantha posted a two-part radio interview to her page, the first part of which she titled: “I still support the CNRP.”

An hour later, she posted the second part of the interview, titling it: “I support the CNRP, but it’s not die-hard support.”