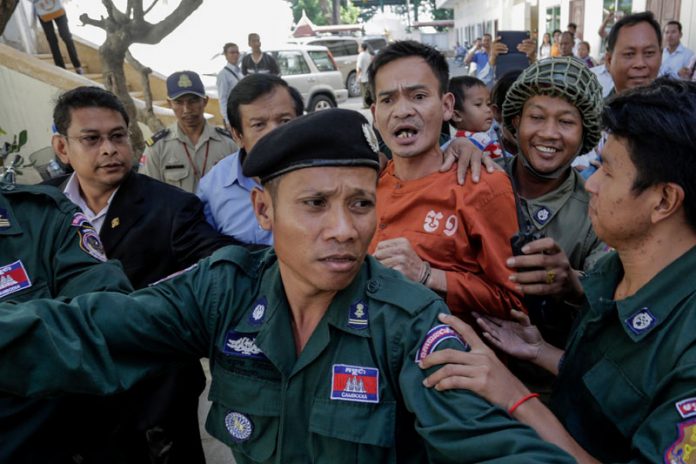 The Court of Appeal on Friday de­nied bail to Meach Sovannara, an opposition CNRP official who was de­­tained last month for his role in a violent clash at Freedom Park on July 15, and Ouk Pich Samnang, a po­­litical activist who was arrested for driv­­ing his tuk-tuk through a security barricade during a protest in October.

Mr. Sovannara—who was de­tained in Phnom Penh last month af­ter an arrest warrant was issued on charges of “joining an insurrection”—said that he believed the decision to deny him bail was politically motivated.

“Other people were arrested at the same time; why were they re­leased and I am still detained?” Mr. Sovannara asked after the hearing, in reference to seven opposition law­makers-elect and another CNRP official who were arrested and sent to Prey Sar prison in July. The group was freed as a result of a po­litical deal be­tween opposition lead­er Sam Rainsy and Prime Min­ister Hun Sen a week after the clash.

“This is revenge from Mr. Hun Sen but we will find justice,” he said, add­ing that he would appeal the decision.

Presiding Judge Khun Leang Meng said the Court of Appeal de­cided not to bail Mr. Sovannara “be­cause the [Municipal Court] closed its investigation and sent it to trial.”

In a separate case, the Court of Ap­peal also refused to bail Mr. Pich Samnang, who was charged with causing damage to public property and obstructing the work of authorities after smashing his tuk-tuk through a barrier near Mr. Hun Sen’s house during a pro­test with villagers involved in a land dispute.

“I am not scared. None of my ac­tivities have been criminal,” said Mr. Pich Samnang after leaving the closed hearing.

Ly Sochetra, Mr. Pich Samnang’s lawyer, confirmed the decision would be appealed and said the court denied his client bail due to concerns that he may reoffend.