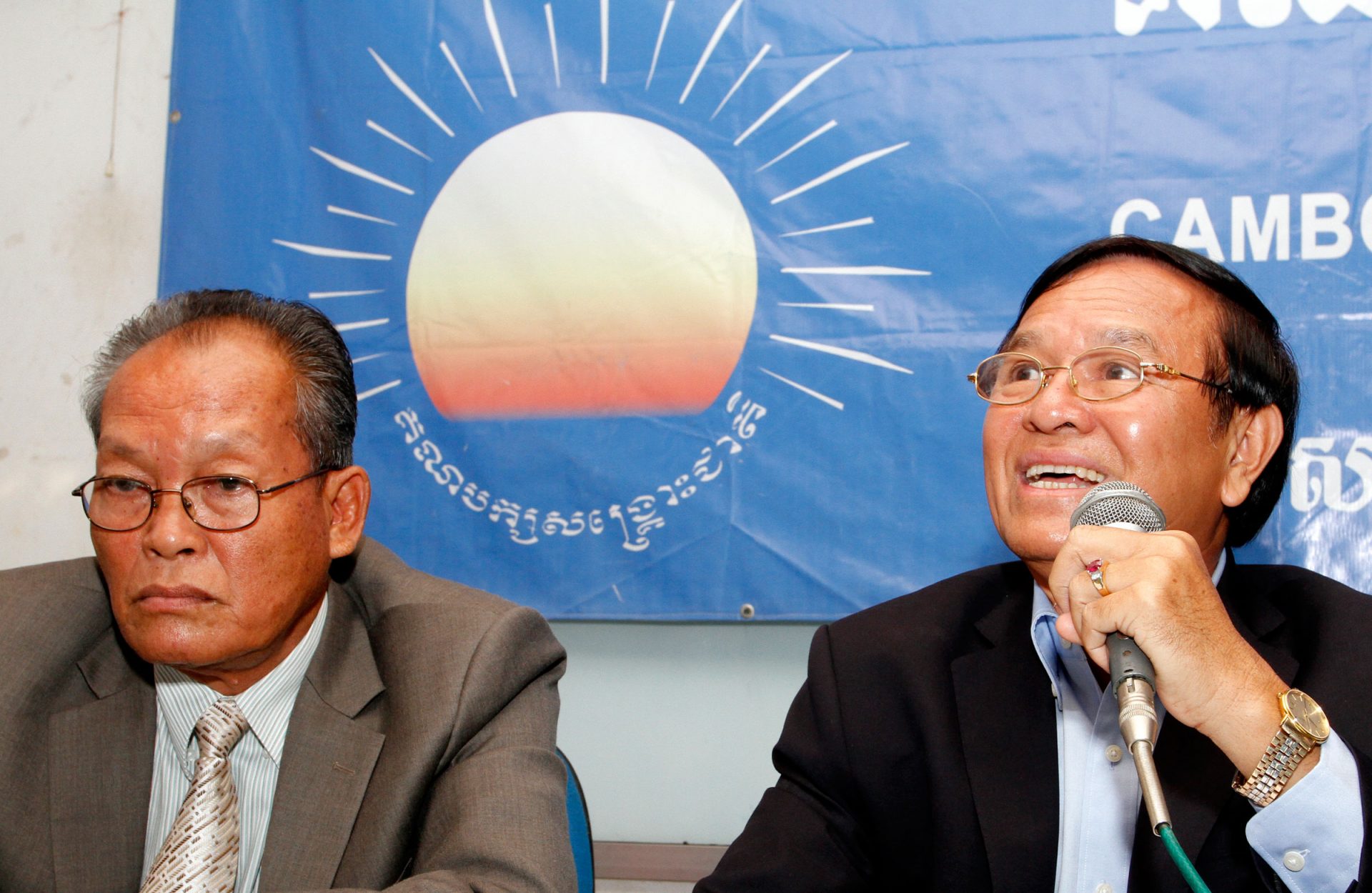 A trio of opposition lawmakers on Wednesday tackled head-on a spate of allegations the government has leveled against them over the past week aiming to paint them as genocide-denying, monarchy-bashing terrorists, in turn accusing the government of twisting their words and misrepresenting events.

With just less than two months to go until the national election on July 28, the government on Saturday released audio of Cambodia National Rescue Party (CNRP) acting president Kem Sokha appearing to accuse Vietnam of fabricating the torture and killing the Khmer Rouge committed at their notorious Tuol Sleng prison.

On Monday, the Council of Min­isters’ Press and Quick Reaction Unit also released a partial transcript of a speech in which SRP lawmaker Kong Korm supposedly claims that the late King Father Norodom Sihanouk, as then-head of state, orchestrated his own 1970 overthrow by Prime Minister Lon Nol. Then on Tues­day, the national police posted photos onto its website of Son Chhay, an SRP lawmaker and CNRP candidate, at­tending a meeting with a dissident Khmer-American group the CPP has labeled—without any evidence—a terrorist organization.

Mr. Sokha, who has faced by far the most damning of the CPP’s latest attacks, flatly denied claiming that Vietnam had created the illusion of a torture center at Tuol Sleng—where researchers agree the Khmer Rouge im­prisoned and tortured at least 12,000 men, women and children—after toppling the regime in 1979.

“I want to confirm that Tuol Sleng prison is where Khmer people were tortured and killed by the Khmer Rouge,” Mr. Sokha said at a press conference at the CNRP office yesterday.

“I myself, Kem Sokha, was a victim of the Khmer Rouge,” he added. “The Khmer Rouge in 1975 took my father to kill him, they tied up my father, they tortured and killed him in front of my eyes…. Why would I deny that there was genocide? Why would I deny that there was killing? Only someone involved in the killing would deny it. Me, I cannot deny it.”

In the audio recording posted online by the Press and Quick Reaction Unit, Mr. Sokha can be heard saying that the prison was “staged.”

Mr. Sokha said yesterday that he was referring to the confessions the Khmer Rouge drew from inmates at the prison through torture—widely be­lieved to have been largely false—as a sort of theater, not to Vietnam in­venting the entire operation.

“The Khmer Rouge staged all the evidence in the prison so it [could] prosecute the people, so the process was staged,” he said.

In the recording posted online, Mr. Sokha also appears to argue that had the Khmer Rouge actually committed the crimes widely attributed to them at Tuol Sleng, they would surely have had the common sense to destroy all evidence of it before fleeing Phnom Penh ahead of the advancing Vietnamese.

Mr. Sokha said Wednesday that those particular words had been cut and pasted back together out of context.

Mr. Sokha also said that the recording could not have come from Prey Veng on May 18.

And just as the Khmer Rouge faked evidence at Tuol Sleng, Mr. Sokha, avoiding any names, accused ex-Khmer Rouge members of employing the same tactics today against him.

Prime Minister Hun Sen, who cited the audio recordings to lambaste Mr. Sokha in a speech on Monday, was a former Khmer Rouge soldier before defecting to Vietnam and then fighting alongside Vietnamese forces to topple the Pol Pot regime. National Assembly President Heng Samrin and Senate President Chea Sim, both CPP, were also Khmer Rouge defectors.

Mr. Sokha also reaffirmed yesterday the CNRP’s endorsement of Mr. Hun Sen’s call for a new law that would make it illegal to deny Khmer Rouge era crimes, so long as it did not impinge on freedom of speech.

And in a not so veiled jab at the ruling party’s leadership, Mr. Sokha then suggested another law: “Anyone with any position or bloody hands in the Khmer Rouge should not be allowed to be a top leader of the country, like prime minister, National As­sembly president and president of the Senate.”

Mr. Sokha said he would not apologize to a group of Tuol Sleng prison survivors who on Saturday demanded that he re­pent in person for his comments. Any apologies, Mr. Sokha said, should come from those who had twisted his words.

Instead of apologizing, however, 42 CPP senators signed a letter calling on Cambodians to “condemn this venomous and deceitful and ill-intentioned person,” said Mr. Sokha.

Bou Meng, however, one of the Tuol Sleng survivors, said he was glad to hear that the opposition leader had denied blaming the prison on Vietnamese lies.

“There is no problem if he said like that. I am happy to hear that,” he said.

At the press conference, Mr. Chhay also slammed the government for trying to link him to the Washington-based Khmer People Power Move­ment (KPPM), which the CPP accuses of plotting to topple the state and monarchy. He said he knew next to nothing about the group when he attended a KPPM meeting, but left the meeting upset by their views, and denied any links.

“I think that the government has no honor for using these pictures to accuse and slander,” said Mr. Chhay, who suspected that the posting of the images on the national police website was in retaliation for a recent trip he made to Ratanak­kiri province to expose illegal logging on a government-is­sued land concession.

Mr. Korm in turn again denied the claim that he said late King Sihanouk had orchestrated his own 1970 overthrow. Sitting before a banner adorned with the CNRP logo, the national flag and photos of the Royal Family, Mr. Korm instead praised the late monarch, who died of heart failure last year.

“Since the beginning until the end, King Norodom Sihanouk was the leader who fought against the yuon,” Mr. Korm said, using a common ethnic slur for the Vietnamese.

Ek Tha, a spokesman for the Press and Quick Reaction Unit, which distributed Mr. Sokha’s comments about Tuol Sleng, stood by the government’s claim that the recording was made in Prey Veng on May 18 and insisted that his words had not been altered in any way.

Asked about the source of the audio recording, Mr. Tha said it came from “different sources.” He declined to say who they were, or even why he was withholding their identities, but insisted that the recordings were “very accurate.”