At least two people were injured on Friday when four employees of the Chinese-owned Hameniven Investment company clashed with villagers in Tbong Khmum province over a disputed plot of land, police said Sunday.

The fight broke out on Friday morning after one of Hameniven’s tractors blocked a tractor belonging to the villagers from plowing part of the plot in Dambe district’s Trapaing Pring commune, according to district police chief Hung Kim Hoeun.

Mr. Kim Hoeun said that a local resident, Phon Chhoeun, 55—who had grappled with Hameniven employee Chen Qiu En, 35, during the scuffle—was arrested later on Friday in response to a complaint filed by the company.

But after being questioned at the Kompong Cham Provincial Court on Sunday, Mr. Chhoeun was released without charge, the police chief said, adding that Mr. Chen remained at a hospital in neighboring Kratie province.

“At the time, two Chinese guys on a motorbike arrived and the one at the back [Mr. Chen] jumped off the motorbike to attempt to strangle Mr. Chhoeun,” he said.

Mr. Sophal said Mr. Chhoeun then elbowed Mr. Chen in the left eye in self-defense, prompting Mr. Chen to punch him in the face.

According to Mr. Kim Hoeun, Mr. Chen suffered injuries to his left eye and his back, while Mr. Chhoeun hurt his neck.

The police chief said Hameniven and the villagers had been quarreling over 260 hectares of the land since the middle of last year, when the company attempted to develop a tobacco and corn plantation in the area.

“We have banned both sides from working on the land and asked them to wait for official resolution,” he said. “But they didn’t listen.”

Company officials could not be reached Sunday. 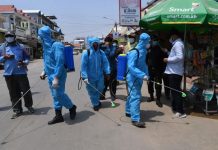 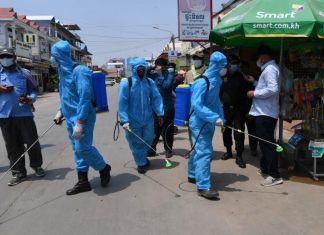