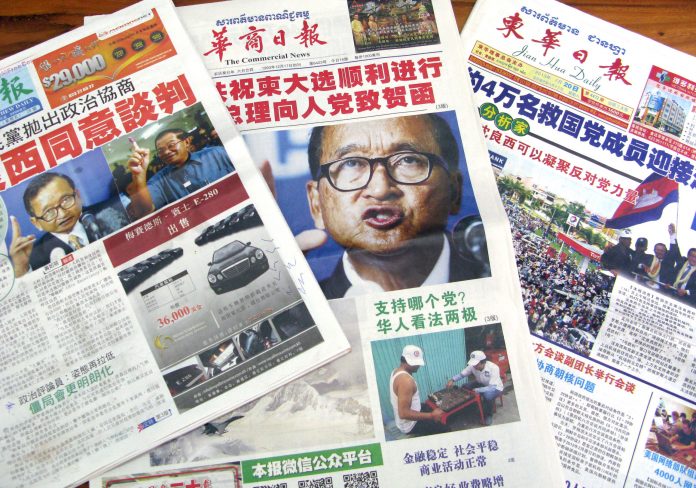 When Sam Rainsy returned to Cambodia last month, Khmer-language media outlets neglected to cover the event. When the opposition leader announced that the CNRP had won the election, it received scant mention in Khmer-language newspapers.

But both events made the front page of almost all of Cambodia’s five Chinese-language daily newspapers.

In its edition following Mr. Rainsy’s return, the Jian Hua Daily filled half of page one with photos from the CNRP rally along with the headline “About 40,000 Cambodia National Rescue Party Supporters Welcome Sam Rainsy Back to the Country.”

When Mr. Rainsy announced that the CNRP would not accept election results released by the CPP, it made front page in The Commercial News. “Sam Rainsy Does Not Accept: Elections Not Fair, Wants to Hold Mass Protest,” read the main headline, which ran along with a four-column photo of Mr. Rainsy angrily pointing his finger at a press conference.

While readers of the most wide­ly circulated Khmer-language dailies get a steady diet of ruling CPP doctrine and pro-government prose, Chinese-language newspapers here provide a markedly more balanced account of what is going on in the county’s political realm.

According to an editor at one of the local Chinese dailies, taking a middle path in coverage of politics is necessary to attract a fairly sophisticated readership of Khmer-Chinese businessmen and foreign investors from Chinese-speaking countries.

“[Our readers] want to know exactly what is happening before, during and after the elections. We just convey the message. If Sam Rainsy comes back and so many people welcome him, we will cover that,” said the editor, who asked not to be named as it was against company policy to speak with other media outlets.

In a market of just more than 10,000 readers, which is split evenly between Khmer-Chinese nationals and foreign Chinese investors, the editor said that presenting credible news is crucial if the newspapers have any hope of turning a profit.

“If we put Rainsy on the cover and [other Chinese-language dailies] don’t, then no one will want to buy their newspaper. I think [the balance in political reporting] is more or less to do with competition,” he said, adding that the Chinese-language press “receives less monitoring and less interference from political parties” than Khmer-language media.

Nonetheless, the editor said his paper does hold back when it comes to writing stories critical of the government. “You can say we play it safe,” he said.

“When we write we try not to be so critical because we are a foreign entity and we don’t want to be targeted. We don’t want people saying we incite society,” he added.

“Some of the articles are written with balance, but 60 to 70 percent support the government,” he said, a result of the mandate of the paper, which is to promote business opportunities in the country.

But rather than supporting the ruling or opposition parties, “Chinese-language newspapers support investment in Cambodia,” he added.

In a full-page spread on Friday, the Sin Chew Daily ran a story about the reaction of investors to the election, headlined “How Are Foreign Investors Looking at Cambodia?”

In that same edition, the newspaper’s lead story was an analysis of potential negotiations between Prime Minister Hun Sen and Mr. Rainsy that ran along with separate photos of the two politicians raising their fingers.

After the ruling party’s worst showing in 15 years, the analysis said: “Political analysts believe that the CPP has come to the ‘turning point,’ if Prime Minister Hun Sen is still unwilling to change or to make political compromises to his tough attitude, it will undoubtedly face significant political challenges.”

The article quotes political analyst Lao Mong Hay as saying “People no longer trust, and no longer like Prime Minister Hun Sen, his popularity and authority have been on the decline, which is why everyone is shouting: ‘Change! Change! Change!’”

The Chinese-language newspapers, particularly Malaysian-owned Sin Chew Daily, remain a crucial source of information about current affairs in the country for an expanding group of Chinese-speaking investors, said Ken Loo, secretary-general of the Garment Manufacturers Association of Cambodia.

“We do read Chinese newspapers. With the news articles, it is what it is,” he said.

The Chinese-language papers are also a key channel through which the CPP and CNRP have relayed their message to Cambodia’s highly influential Chinese-speaking business community.

If Mr. Hun Sen’s position on China was unclear prior to the election, the prime minister reminded the super-power how much he appreciated its aid in his second public address after the election, which by all account was his party’s worst since 1998.

According to an article published on Saturday in the Sin Chew Daily, Mr. Hun Sen said: “Last time, they [the U.S.] cut our aid, they were only ready to provide 100 old military trucks. Chinese people could not bear watching, and provided us with 257 military trucks.”

But Mr. Rainsy also assured the Chinese-speaking community, in an article in the Sin Chew Daily on Saturday, that his party too would support Chinese interests in Cambodia.

“On behalf of the National Rescue Party, our position toward the Chinese government is clear: We support the One China policy and support China’s right to the Nansha [Spratlys] and Xisha [Paracels] Islands,” Mr. Rainsy reportedly said.

“I can assure the Chinese government that we see China as Cambodia’s most important ally,” he added, according to the Sin Chew Daily article.

Sipping tea with a group of graying Chinese-Khmer men at a restaurant on Phnom Penh’s Kampuchea Krom Boulevard, Seng Sok, 65, a retired businessman, said that he prefers Chinese-language papers because they allow both the CPP and CNRP to have their say.

“We just want them [the CPP and CNRP] to work together and don’t fight each other so we can do our business,” he said.

Eating lunch at a Taiwanese restaurant on Charles de Gaulle Boulevard, Yu Sheng Jun, a manager at a garment factory in Kompong Speu province, said that his main complaint about the Chinese-language newspapers was their reticence to criticize the government, which he characterized as being “corrupt” and “not caring about its people.”

“Even though I understand the newspaper is not completely realistic, I still want to see what is going on and I can still find some information then I can draw my own conclusions,” he added.